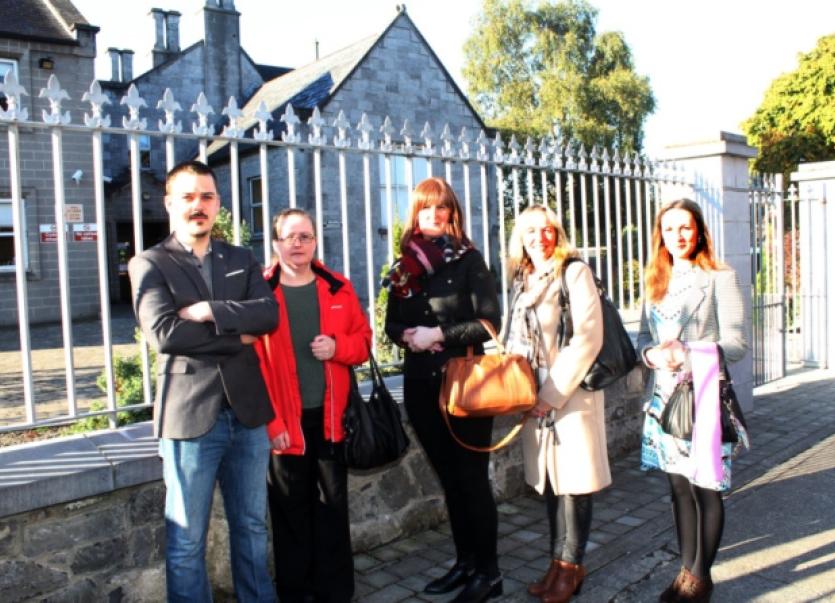 A ROW over conditions at a city school reignited as parents again demanded answers from the principal.

A ROW over conditions at a city school reignited as parents again demanded answers from the principal.

Four parents gathered at the Model School in O’Connell Avenue at the start of classes to question principal Diarmuid Murphy about why their children were learning in a facility they describe as a “shed”.

When they arrived in reception, however, they were escorted off the premises, with Mr Murphy citing “child protection issues”.

The parents are furious at having their children taught in the temporary classroom, claiming they have been sick due to dampness, and the cold.

They argue with reorganisation, all 24 sixth-class students could be housed in the main school.

Mary Beth Kelly, whose son is in the sixth-class temporary classroom said they made this very request when they arrived at the building on Thursday.

“He said there was no way. But yesterday [Wednesday] a child was transferred upstairs [to the main building]. We have been in at least three meetings with the principal, but he is not budging,” she said.

On top of this, he adds it has been passed as ‘fit for purpose’ by the Limerick Fire Officer, the council and the environmental health inspector with the HSE.

In response to this, Ms Kelly said: “It is atrocious in there. There is only one toilet allocated to the girls. The boys have to walk across the yard into the main school building to go to the toilet.”

She also claimed there are “very upset” children coming home from school each day.

“It should not be like this. These should be the happiest days of their lives, their last year in national school,” she added.

Another parent, Annette Power, Dooradoyle said: “We feel we have been treated with the utmost disrespect and disregard, and more so the children.”

Sinn Fein’s city east councillor Séighin Ó Ceallaigh, who has raised the issue of the facility on a number of occasions, said: “It is worrying that a reported €240,000 was spent on this shed, and I cannot stress enough, it is a shed, it is not a pre-fab, it is not an extension.”

He called on Education Minister Jan O’Sullivan to step into the impasse to bring it to a conclusion.

Speaking to the Limerick Leader, Mr Murphy said: “As is the norm in all schools, when the bell goes, parents are requested to leave the school building. This is in relation to child protection issue, and for the safety of all the children in the school.”