Thugs damage Limerick club’s GAA pitch but not their spirit 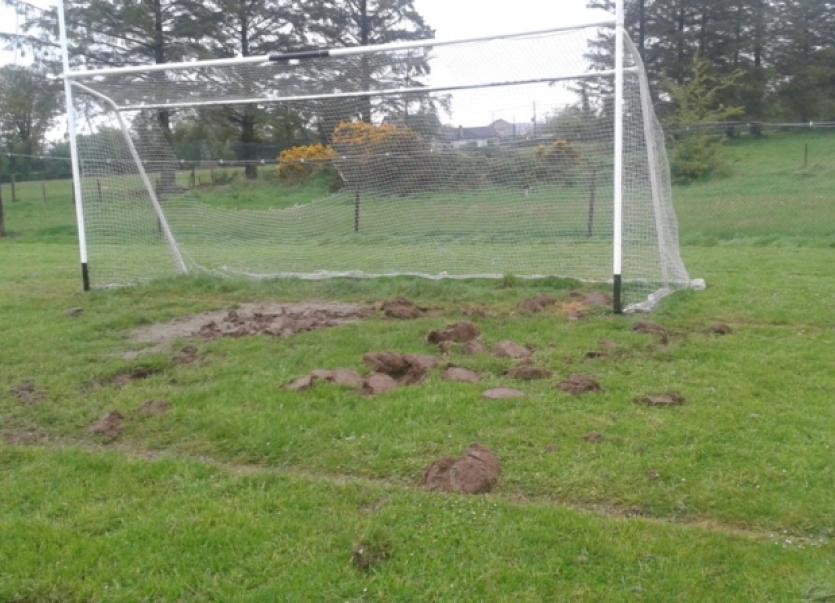 VANDALS crept into the smallest GAA club in County Limerick to dig up the pitch, tear down goalposts, cut and steal the nets.

VANDALS crept into the smallest GAA club in County Limerick to dig up the pitch, tear down goalposts, cut and steal the nets.

Knockane GAA’s club new pitch development hasn’t even been officially opened yet but it has already being targeted. A couple of years ago the club took the brave decision to purchase 22 acres close to Garrydoolis National School and the church. As well as putting in a new pitch for the current and next generations they are also constructing a walkway around it for the whole community to enjoy.

Chairman of the club, Larry Creamer said after the shock at the senseless damage subsided there was a huge response to clean up the damage.

“It happened in the early hours of last Sunday week. They dug up holes in the pitch, broke the poles, cut one of the nets in the goal and stole one of the nets.

“The call went out on the following Tuesday night and the response was magnificent. For the bad few, there is the many that encourage us,” said Larry.

More than 30 descended on the grounds in the parish of Pallasgreen-Templebraden.

“Over 30 - a lot of them were players - came down at short notice to help us fill in the holes and clean up the place. There was a huge response. We’ve always been supported by the community. We don’t doubt their support - both financially and physically - they will be there for us.

“We’re not trying to do all GAA stuff there, we are doing community projects as well. We are doing a walkway and a nature park. It is not just hitting at the GAA club it is hitting at the community - that’s the bottom line. The works are ongoing, the determination of the people involved is there - nothing like this is going to stop them or hamper them. It is onwards and upwards” said Larry, who estimates the damage at up to €1,000.

The chairman doesn’t think the miscreants did it out of spite.

“There is a great saying in Yorkshire, ‘There is nowt so queer as folk’. Look they are out there - whether it is stupidity or jealousy I don’t know,” said Larry.

The matter has been reported to gardai and anybody with any information is asked to contact gardai in Pallasgreen or Bruff.

However, it wasn’t until over a century later that they secured a permanent playing pitch. In total, they are investing around €300,000.

“Between grants and the Limerick draw and every other sort of fundraiser we have spent a lot of money. Over half the money for the pitch had been raised in the previous years locally. It would be over €150,000.

“We have four pillars of the parish left - the local pub, church, school and GAA club. We are a real microcosm of rural Ireland and we can’t do without the four of them,” concluded Larry.