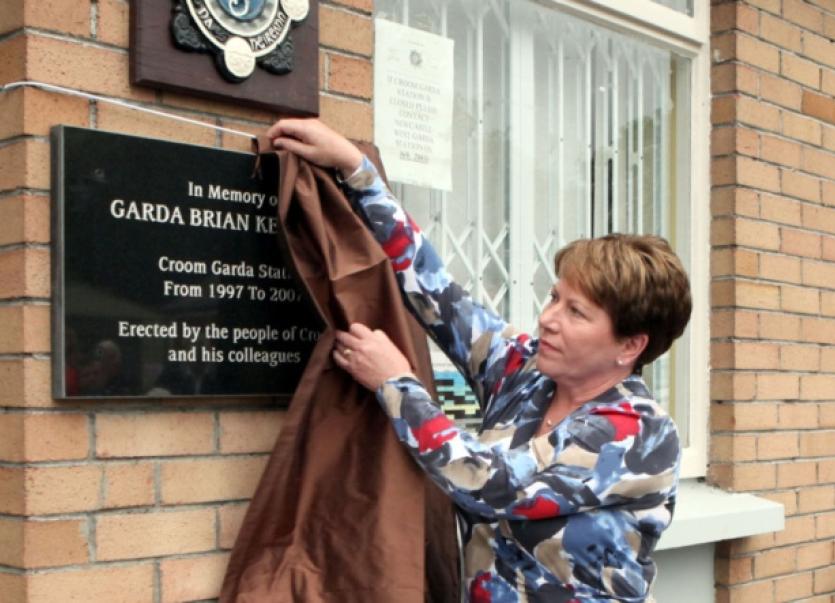 The people of Croom this week remembered a “real policeman” who died doing the job he loved.

The people of Croom this week remembered a “real policeman” who died doing the job he loved.

Eight years after his tragic death while attending the scene of a road accident, Garda Brian Kelleher was honoured with the erection of a plaque in his memory in the village where he served for 10 happy years. A large crowd of local people as well as current and former members of An Garda Siochana were present to watch Garda Kelleher’s wife, Marie, unveil the plaque in his memory.

Mrs Kelleher thanked the people of Croom and her late husband’s colleagues for choosing to honour him in such a way, pointing out that he was “very happy” in Croom. “Brian was very special to us, his family and close friends, but it’s lovely to know that he was still so warmly remembered by his colleagues,” she said.

“It is lovely to know that the people of Croom, who he served for the last 10 years of his life, still remember him so well and so fondly.”

Supt Tom O’Connor paid tribute to his late colleague who, he said, had left a “great legacy”.

“Tonight is the epitome of what community spirit is all about. The people of Croom have demonstrated that in a very forthright manner. Brian had his own unique style of policing and I suppose his style was the old-fashioned style that has stood the test of time and continues to stand the test of time,” said Supt O’Connor.

Should any young person have considered causing trouble, “he more or less coaxed them to move on and go home at night in his own expert manner”, Supt O’Connor added.

Seamus Sheahan, who was MC for the night, said Garda Kelleher had been “highly respected by all - young and especially the elderly” in Croom.

“He would make it his business to meet, discreetly, a young lad who may be going in the wrong direction, he would do his best to bring that young man around and keep him out of trouble,” recalled Mr Sheahan.

“Regarding our elderly parishioners, especially those living along, he would visit them most days he was on duty here in Croom. He was on first name terms with most of them,” he added.

Borrowing from the tribute to recently retired superintendent Jim Brown by Garda Commissioner Nóirín O’Sullivan, he described Brian Kelleher as “a real policeman who is genuinely interested in the community he served”.

“Brian was moulded in the best tradition of the Force. He was painstaking in his enquiries, courteous, but also wise in the ways of the world and the foibles of human nature,” Ms Sheahan added.

Mr Sheahan also recalled Mike Liston, the firefighter who died alongside Garda Kelleher, when a car crashed into them as they attended the scene of a traffic accident near Askeaton on February 25 2007.

The plaque was blessed by Fr Michael Wall, who recalled Garda Kelleher was “a very solid man”. “He was very much a family man, a very noble kind of character,” added Fr Wall.