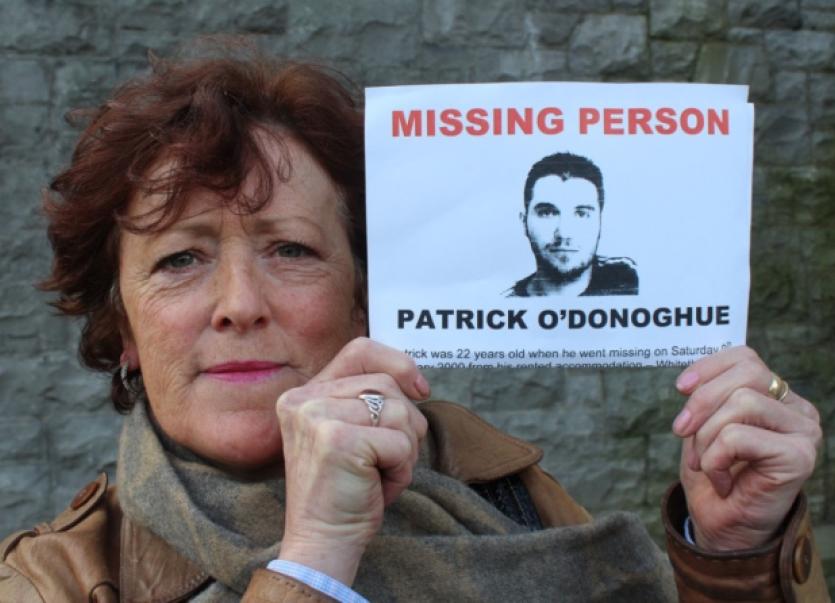 EXACTLY 15 years after he mysteriously disappeared, a new campaign involving the distribution of thousands of leaflets around Limerick city and county, may help unravel the mystery of what happened to a 22-year-old student.

EXACTLY 15 years after he mysteriously disappeared, a new campaign involving the distribution of thousands of leaflets around Limerick city and county, may help unravel the mystery of what happened to a 22-year-old student.

Patrick O’Donoghue, who came from a small farm at Knocknacrohy, outside Abbeyfeale, was a fourth-year college student at LIT when he disappeared on Saturday January 9, 2000 and his body has never been found.

This was around the same time of the high profile disappearances of Aengus Shanahan and Desmond Walsh, two former employees of Dell, who were “definitely murdered” according to former London-based policewoman, Catherine Costelloe.

She is now living in Banogue, Croom and is working with the three families to try and find out what happened to them.

The case of Patrick O’Donoghue is set be given new impetus with the distribution of up to 6,000 posters.

Suicide expert, Professor Ella Aaernsman, world president of Suicide Research, says a ‘suicide note” found where Patrick was staying was anything but and she has “concerns” about the case. She also believes the Shanahan and Walsh cases are homicide cases, according to Ms Costelloe.

Patrick was in rented accommodation at Whitethorn Drive, Caherdavin.

“His devastated elderly father, who still lives at his home in Abbeyfeale is still devastated and his four older sisters to this day can’t talk of Patrick without breaking down in floods of tears,” she says.

His four sisters, Mary, Margaret - a physiotherapist in Kent - Lilly, a nurse, and Caroline, a solicitor, are hoping for answers to relieve their agony, as they have had no closure in the case.

Ms Costelloe continues each week to work on the case. Friends and teachers described Patrick as a “better than average” student. His ultimate career would have been, most likely, as an auctioneer.

“I went to Mayorstone garda station (and they) said that all the indications were that this man took his life, but the file was very incomplete. I asked why did they think it was suicide and they said that in his rented accommodation, which he shared with two fellow students, who I have since located, there were suicide notes,” he said.

She said that after he went missing, what were called suicide notes were found.

“The suicide notes, allegedly said: ‘Dear Lord God take me back in time and give me a second chance’...signed Patrick O’Donoghue.”

Ms Costelloe also says that no photo was published about him in any paper. She is hoping to do at least 6,000 posters in the hoping of finding out more information.

“We are making a specific appeal, because Professor Aaernsman, has said that this was not a suicide note. She said anyone going to take their life is not going to write to God.”

The last time he was seen was seen was when his father dropped him off to go into Limerick in the bus, for college.

Now Ms Costelloe wants to hear from anyone who might have employed Patrick around that period. She was told he worked in different jobs, with an auctioneer and pub.

“He had several part time jobs when he was in Limerick city studying at LIT. I am hoping that by putting out an appeal to the catering industry that someone will remember him and contact us. I also believe he worked in a fish and chip shop, could those people please contact us.” The phone number is 085-2092119.