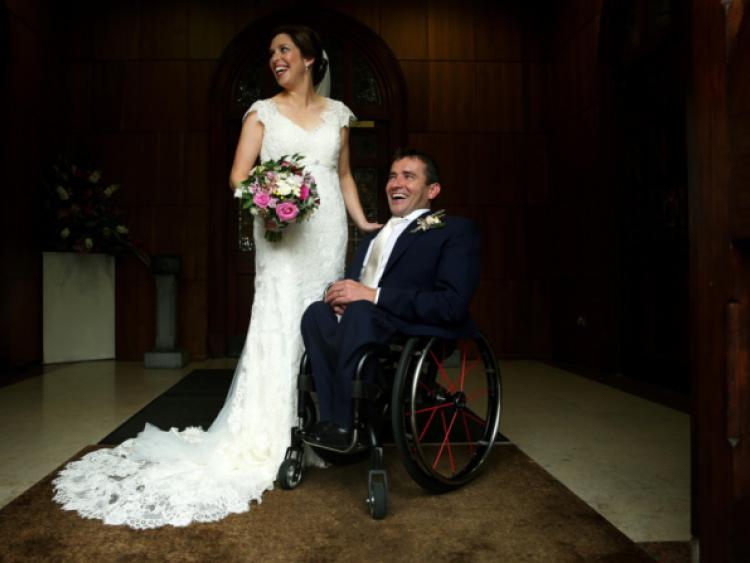 JOHN FULHAM got his first wheelchair at the age of four. He was born with spina bifida but it wasn’t going to prevent him from getting up to all the usual mischief that childhood brings - messing around on the local swings and slides and playing out on the road in Castletroy.

JOHN FULHAM got his first wheelchair at the age of four. He was born with spina bifida but it wasn’t going to prevent him from getting up to all the usual mischief that childhood brings - messing around on the local swings and slides and playing out on the road in Castletroy.

Today, John is corporate partnership development manager with the Irish Wheelchair Association and it’s now just over three weeks since his October 3 wedding.

“It was everything we had hoped for – apart from the rain. It was probably the first day since the summer that we had rain but you know what? It didn’t make a blind bit of difference – we had an absolute ball, great craic.”

John met his fiancee Mary Jennings through his job in AIB’s head office in Ballsbridge, where he worked as a bank manager until January of this year.

It took John a few months to find the courage to ask Mary out, but, five years later, they wed in her local church in Dunboyne, County Meath. “Married life has been great – what amazes me is the amount of goodwill – it has blown me away. People have been very generous of spirit. You live off that for a while and slowly but surely you come back down to earth and back to reality but it’s great to have a trip to New Zealand in the new year to look forward to.”

It wasn’t until John enrolled in secondary school that he felt somewhat different.

Around this time, a volunteer from a local IWA sports club spotted John and, seeing his potential, invited him to a local track and field event.

His first Paralympics was 1992 and he participated in every Paralympic Games from then until he retired in 2004, as well as in countless European and World Championships.

After he left school John started a college course in Limerick but didn’t like it. He saw an ad in the paper for a job in the bank and got it. “I wanted to live my own life and be independent. You have to go out and seize the day.”

John lived with a friend for a year in Dublin but then had to look for accommodation which he found “very difficult”.

He ended up moving into a two-story house with another friend and for the next 10 to 12 years he lived in two-storey houses.

“I had a chair upstairs and a chair downstairs. And I arsed up the stairs and I arsed back down. It was impossible to find appropriate accommodation. I was lucky I was agile enough to do that and the people I moved in with were great - they got used to it very, very quickly. They are the practical challenges that people face and I don’t think it is that much easier for people today.”

In 2007 he bought his own ground floor apartment.

Meeting Mary, he says, was a big turning point in his life and even bigger again “was realising I might actually want to marry this girl”.

“She had no experience of someone with a disability.”

Although he has been living in Dublin for almost 23 years, Limerick is still very much home for John.

“I do miss living in Limerick of course. I moved to Dublin in November 1991 but once a Limerick man, always a Limerick man. I try to get home at least every three to four weeks. I love being at home. I wreck all their heads up here in Dublin about Munster Rugby - anything that is Limerick related, I will quite happily throw in their faces,” he jokes.

His parents, Mary and Gerard, still live at Golf Links Road in Castletroy. “I’m the only member of my family not living in Limerick. My sisters Jane and Grace were living abroad but they are both now married and living in Limerick.”

Seeing how much sport can inspire the younger generation was one of the factors that spurred John to leave his job in AIB in January after 22 years and start a new career with the Irish Wheelchair Association. “It was a risk,” he asserts. “The hardest part was making the decision to go when you are in the one job for such a long time. It took a while for me to realise that I have a lot more to offer but once you have made the decision to go, it’s fine. I haven’t looked back since.”