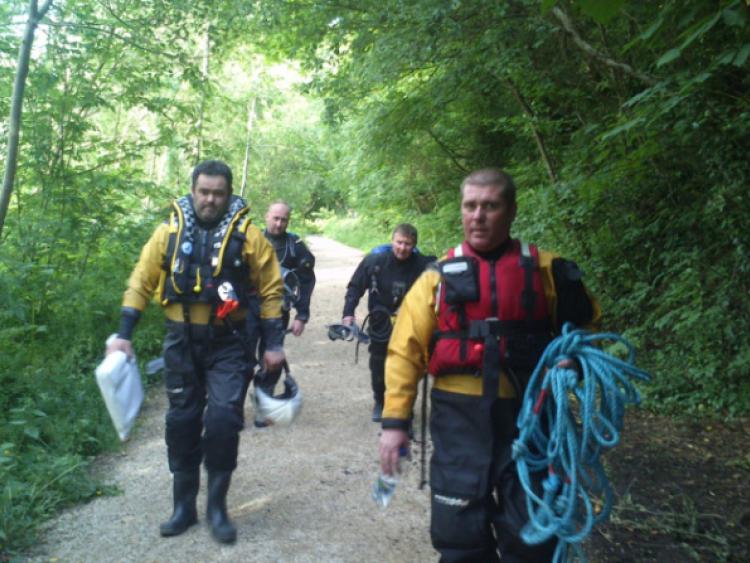 INVESTIGATIONS are continuing after a man drowned while exercising his horse in the river on the campus of the University of Limerick.

INVESTIGATIONS are continuing after a man drowned while exercising his horse in the river on the campus of the University of Limerick.

The body of the man, who has been named as John Casey, 35, from Clonlong, Southill was recovered from the river Shannon at UL shortly after 9am on Wednesday following an extensive multi-agency search operation.

The alarm was raised shortly after 6pm on Tuesday evening after Mr Casey entered the water with his horse at an area which is known locally as Sandy.

It is understood the area is popular with members of the Travelling community who often use it train their horses by using the water to strengthen the horses’ legs.

According to eyewitnesses, when Mr Casey fell off the horse, he was swept away by strong currents.

The horse which Mr Casey was riding drowned a short time later and its remains were removed from the water by members of the Limerick Society for the Prevention of Cruelty to Animals.

After the alarm was raised, several units of the Limerick Fire Service attended the scene at UL along with gardai and volunteers from both Limerick Marine Search and Rescue and the Killaloe-Ballina Search and Recovery unit.

A large number of Mr Casey’s friends and relatives also gathered in the area to assist in the search operation.

Rescue 115 – the Shannon-based coastguard helicopter – was also deployed for several hours until the search was called off at around 11pm.

Searches of the water resumed at 6am on Wednesday and at 9.10am divers from Killaloe-Ballina Search and Recovery unit, who had been deployed at the request of the Irish Coastguard, discovered the body of Mr Casey in an area of the river, which is located adjacent to the old swimming pool at UL.

The body was removed from the water before being handed over to gardai.

It was then taken to University Hospital Limerick where a post-mortem examination was conducted this Wednesday afternoon.

Gardai at Henry Street garda station say they are treating Mr Casey’s death as an accident but say a file will be prepared for the city coroner.

An inquest will be heard in the coming months.