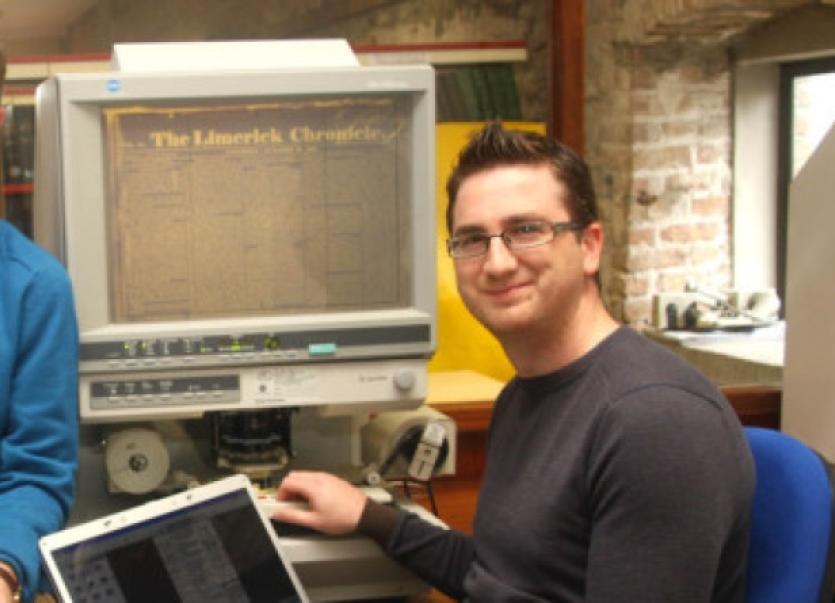 MISSING burial records for almost 800 infants who died at St Mary’s mother and baby home in Tuam in the 36 years to 1961 have resulted in a storm of publicity around the world.

MISSING burial records for almost 800 infants who died at St Mary’s mother and baby home in Tuam in the 36 years to 1961 have resulted in a storm of publicity around the world.

And many of the details in those media reports have been unearthed by Limerick historian Liam Hogan.

Tuam historian Catherine Corless, whose research on the Bon Secours home in the Galway town has ultimately resulted in a government inquiry, has distanced herself from more sensationalist reports of 800 babies “buried in a septic tank”.

And Mr Hogan, who works at Limerick City Library, said he had also taken the dispassionate historian’s approach to releasing information on the home he has found in newspaper archives in the last number of weeks.

“I had read about Catherine Corless and the revelations and wondered to myself how did we get to that point where we don’t know where nearly 800 children are buried. I just delved as far back as I could go on what was relevant and tweeted a contemporaneous account. People were really curious to see what the attitudes were at the time and what may have led to what we have learned in the last couple of weeks. I tried to create a narrative to help people understand it more,” said Mr Hogan.

That story was put out on the Limerick 1914 Twitter account which Mr Hogan curates. It is through this account and a blog that Mr Hogan has recently created a mapping project of Limerick’s World War One casualties.

“The World War One project took about four or five months to finish and then when I heard about this, I said that if I could give that much time to adult men who voluntarily served in a war well what’s a few days research for those children? That was the underlying motivation for everything I did.”

It was a private project for Mr Hogan, done before and after work and while on lunch, and using his own subscription to newspaper archives.

And the response has been huge. There have been requests for more information from the likes of the Washington Post and interview requests from the BBC while newspapers and broadcasters around the world have used details mined from the archives by Mr Hogan. A narrative of the Tuam baby home he created on Storify got 47,000 hits in a single week, with Icelandic national television, of all organisations, embedding it on their website.

Archbishop of Tuam Michael Neary may have this week distanced the archdiocese from the scandal and urged the Bons Secours order to release information but the reports unearthed by Mr Hogan show just how involved senior churchmen were in bringing the nuns to Tuam.

The Archbishop of Tuam was “anxious that the Bon Secours sisters should go there”, a news report from 1925 states.

There are reports from meetings of Galway County Council - which paid a capitation fee for every mother and baby confined in the home - of the urgent need to provide a maternity wing at the home because apparently more respectable women did not want to share wards in the county hospital with so-called fallen women.

The extent to which church and state supported the home is laid bare, with the order highly praised by politicians for how well the home was run.

The chairman of the County Board of Health believed - in one report from 1926 - that “indisciplined” unmarried mothers at the Tuam home should be transferred to the Magdalen asylum in Galway even though he believed there was no legal basis for so doing.

“They decided to still go ahead and do it anyway. That’s the kind of containment policy they had,” said Mr Hogan.

His research does not show there was any mother and baby home on the scale of Tuam or Bessboro in Limerick. But there was such a home operated by the Sisters of Mercy in Kilrush in the 1920s, which it is believed closed in the 1930s.

“That had been a workhouse as well. I was in touch with some of the historians in Kilrush and they hadn’t even heard of it (as a mother and baby home). I think it may only have been open for a short time, maybe six or seven years, but it is something that should definitely be looked into. Going by the description, it was in a terrible state and I imagine mortality must have been high there too,” said Mr Hogan.

Unmarried mothers in Limerick often ended up in the county home in Newcastle West, the city home (now St Camillus’ Hospital) but Limerick City and County Council said this Wednesday it was unaware of where the archives of those institutions in that era were held.

Newcastle West woman Philomena Lee, the subject of last year’s Oscar-nominated movie, had her son in Sean Ross Abbey, a mother and baby home in Roscrea.

“Philomena is quoted as saying there may be as many as 700 in unmarked graves there so it looks like this inquiry is going to have to be a very big one,” said Mr Hogan.