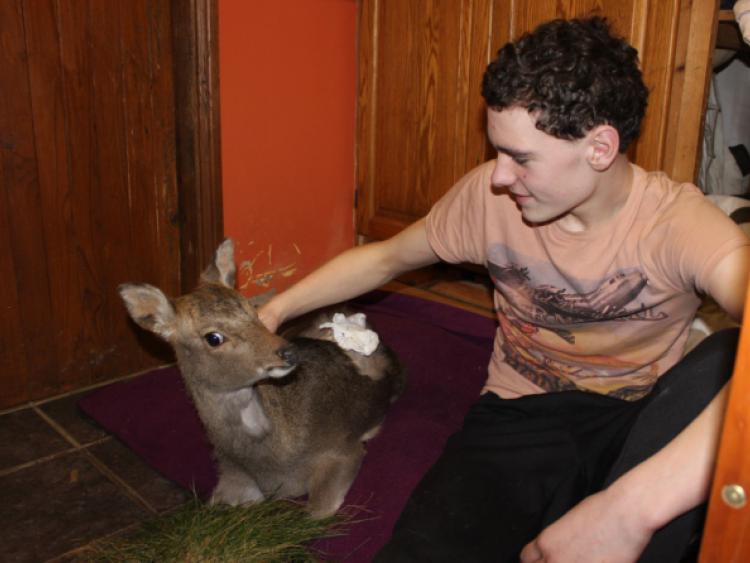 A YOUNG deer which was found crying out in pain after being shot in the back by a hunter is putting up a miraculous fight for life.

A YOUNG deer which was found crying out in pain after being shot in the back by a hunter is putting up a miraculous fight for life.

The fawn, believed to be just five months old, was rescued by two animal lovers from Kilmallock after she was found slumped in a dyke by a farmer on Saturday morning.

It is believed that she suffered the gunshot wound on Thursday night when a man with a rifle was spotted on the farmer’s driveway.

The Sika deer who has been christened Mairead – after the farmer’s sister who helped keep her alive – underwent two operations at Crescent Veterinary Clinic in Dooradoyle this week, and is said to be making a remarkable recovery.

“She had to have surgery on Monday and Tuesday to clean out the dead cells and the surrounding area that might be infected,” explained Rosie Campbell of Animal Magic in Kilmallock who rescued the deer from the County Cork farm on Saturday.

“She is home and is bright. She is nibbling away at grass and clover. The bullet glanced her spine and it actually disintegrated inside her so there was lots of bits of the bullet inside her. We don’t know if she can walk yet - over the next couple of weeks we will ascertain if she has full use of her back legs. She had x-rays and the spinal cord is in tact,” continued Rosie this Wednesday.

The alarm was raised when the farmer in Glencarney outside Rochchapel noticed crows circulated an area of his land at around 9.30am on Saturday. As he moved in closer to inspect the dyke, he spotted a small deer in considerable distress.

“The crows were picking at her and they were actually picking at where the shot had hit so they were actually clearing out the wound. There was fresh blood coming to it so it wasn’t a bad thing. She was crying the crater and trying to crawl away. She is a beautiful, gentle little thing – she actually tried to lick my brother’s hand.”

Micheal and Mairead immediately set about getting help for the ailing animal. They came across the number for Animal Magic in Kilmallock.

“I found Rosie and Denis’ name and I rang them, and God bless them they came out straight away,” said Mairead.

“My brother put a little canopy over the deer to try and keep the crows off of her until they came out because obviously it’s a nice drive from Kilmallock to Rockchapel.”

As soon as Rosie and Denis got her to their home in Kilmallock they gave the deer some pain relief.

“She was obviously very scared. The funny thing was she was licking us,” said Rosie who estimates that the deer is no more than five months old.

Her care and treatment is expected to run into hundreds of euro.

The incident has been reported to the gardai in Newmarket.

“There is a season for deer and you have to get a licence. The land is private. It is being investigated in terms of poaching. You do not shoot a baby,” said Rosie.

Mairead meanwhile, is urging anybody who sees people illegally shooting on their property, to report the matter to the authorities. The family, she said, have had problems in the past with people shooting near their land.

“There would be a lot of deer in Rockchapel,” she explained.

“They are mostly Sika deer. They would come up to our back door. We live in harmony with them, we have no problem with them, they don’t do any harm.

“You need a really good shot to take down a deer. They could have hit other deer who could have gone off into the forest. We have horses and thank God they are all in and we have some cattle as well.”