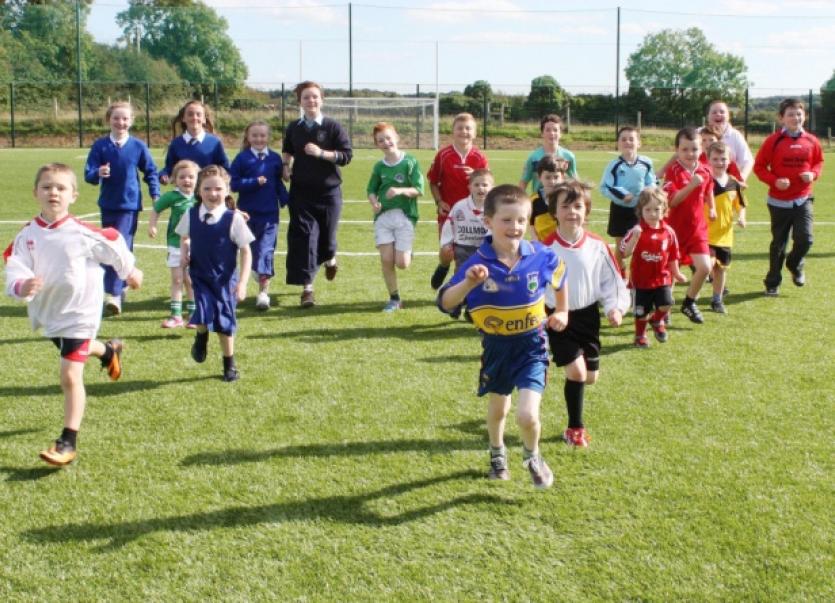 ONE of the heroes of the soccer world will pay tribute to a world hero this Saturday when Niall Quinn will open the Ger McDonnell Memorial Park, the newly-completed astroturf pitch in Kilcornan.

ONE of the heroes of the soccer world will pay tribute to a world hero this Saturday when Niall Quinn will open the Ger McDonnell Memorial Park, the newly-completed astroturf pitch in Kilcornan.

And the small community of Kilcornan, which has made it all possible, will have given itself a big reason to celebrate.

A little over 18 months ago, a new committee, the Kilcornan Community Development Committee set out an ambitious target: to develop a new, astroturf pitch on community-owned land which would be available for use to all codes, GAA, soccer and rugby.

Now, with funding from West Limerick Resources and a lot of fund-raising, the dream has been achieved.

And this Saturday, the community’s 300 or so households will celebrate that achievement when, Niall Quinn, former Ireland player and now soccer commentator, will officially open the pitch.

“It really is state-of-the-art,” enthuses committee member and community PRO, John O’Gorman. “It has been developed to the highest standard in the country and is approved by all the sporting bodies in the country. It is top class. ”

The cost of the project was a heart-stopping €300,000 and although half of this came by way of grant from West Limerick Resources, it left the community with a steep fund-raising hill to climb. A race night and two successful Curraghchase Road Runs have made serious inroads, but, says Mr O’Gorman, they are also hoping to rent the pitch to various clubs and groups to help pay down the loans.

But tragedy struck within hours of his achievement and Ger lost his life in the world’s single worst mountain disaster which claimed  11 lives.

Ger, however, was hailed a hero because, despite the risk to himself, he had returned up the mountain to help three other climbers caught in ropes. They were all killed when another ice-fall swept them away.

Ger, who hurled a sliothar from the top of Mt Everest, will be remembered with pride this Saturday. And a new generation of young Limerick people will hear of his bravery and of his sportsmanship.

Teams from Croagh/Kilfinny, from Killeedy, from Cappagh/Kilcolman and Askeaton and from Copsewood Gaels will take part and there will be music and refreshments in the adjoining community centre.