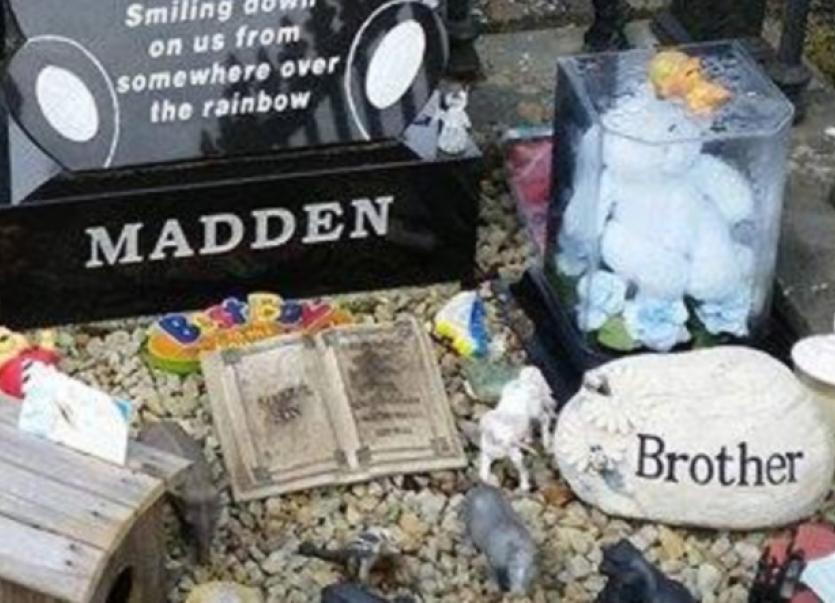 A LIMERICK mother has spoken of her “heartache” at seeing that toys left by her children on the grave of her stillborn baby boy have been stolen.

A LIMERICK mother has spoken of her “heartache” at seeing that toys left by her children on the grave of her stillborn baby boy have been stolen.

Dorothy Madden, a mother of three, regularly visits the grave of one of her children, who passed away in 2010, in Mount St Lawrence cemetery in the city.

Dorothy and her husband Martin, and their children Dennis, eight, and Rachel, three, have left little items on Peter’s grave on his birthday and at Christmas, among other special occasions.

This week up to 15 of those precious items vanished, and she is appealing for them to be returned and for his grave to be left alone.

“It’s heartbreaking. I’m still very upset about this. We went to his grave on Monday as it would have been his first day in school, and immediately I knew there was something wrong. I got a fright [when I saw it] and went into shock a bit, and started crying.

“I hope that someone might know who took them or let people, who might have bought or were given these, that they were stolen from a baby’s grave. I am devastated that this has happened,” she told the Limerick Leader.

“The grave is off the beaten track, in an old part of the graveyard. The toys aren’t that light, which is why we believe it might be more sinister than a child just picking up one say and taking it away.

“If it was just one or two toys, but it was about 10 to 15 toys that were taken. I’d love to keep it up, now that our daughter is three, but you would be afraid to leave anything there anymore. But if someone just left his grave alone I’d be very happy,” she explained.

Peter John Madden passed away on April 8, 2010. He was the second child born to Dorothy, from Corbally, and Martin, from West Cork.

Sadly he was stillborn, and she carried him for the last seven weeks of her pregnancy knowing that he not may survive due to Edward syndrome, a serious genetic condition.

She was told he was “incompatible with life” when she was 31 weeks pregnant and had to plan for his funeral in the remaining weeks of her pregnancy.

The couple, who live in Murroe, said they have received offers from friends and family to replace the toys, but they are afraid to leave them alongside his teddybear shaped headstone again in case there are further thefts.

The headstone reads that Peter is an angel now “smiling down on us from somewhere over the rainbow.”

Dorothy said she cannot believe that many of the toys his brother had requested from Santa every year for Peter – the brother he never knew – are now gone. The Schleich toys, hard-wearing figures which could withstand all weather conditions, included a unicorn, a hippo, a rhino and a cow. She said other, more weather-beaten items have been left untouched.

The devastated family left the grave, which had not been interfered with before now, leaving behind a school tie on the railings to mark what could have been the start of his school life.

In the years that have passed they want to remember him every day.

Inspite of their personal tragedy, she said she wants the grave to be a “happy place” where he can remembered, and is reluctant to cement any items into the ground to prevent them from being taken again.

“A lot of people take the view ‘He was stillborn, you didn’t get to know him’. But I can still see him in my mind’s eye. I think of him every single day. It’s way for us to celebrate him but also grieve and remember him. Some people might not understand that, but it’s for us. It’s very, very important to us. People don’t know until they have been through it themselves. We don’t want him to be forgotten. He was very much wanted; I’d give anything for him to be here,” she said.

She said her children hang a Santa sock for Peter in their home every year to leave him a present, and they leave a memento from any family holiday or special occasion on his grave.

Dorothy initially posted her story on Facebook this week, seeking assistance from anyone who could help return the toys, and her plea was shared some 250 times by friends.

Some 70,000 people are buried in Mount Saint Lawrence, which opened in 1849, throughout the 18-acre site. The cemetery has been subject to vandalism in the past, with headstones smashed by last year. On that occasion, a disabled man, whose wife’s headstone was vandalised, vowed to stay all night in the graveyard to catch the offenders.