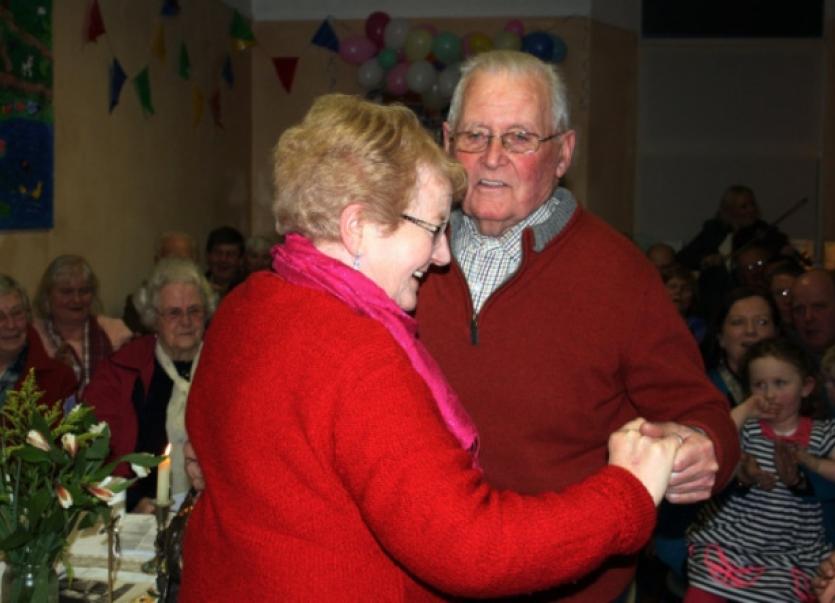 AT a time when self-help books reside on many a bedside locker and the pursuit of happiness has become big and complex business, one Limerick couple are living proof that the key to a long marriage and peace of mind is actually quite simple.

AT a time when self-help books reside on many a bedside locker and the pursuit of happiness has become big and complex business, one Limerick couple are living proof that the key to a long marriage and peace of mind is actually quite simple.

It’s 56 years since Billy and Helen Gleeson tied the knot. They knew each other since childhood – Billy is older by 14 years.

Helen Bourke was born and raised in a place called Lackelly, Knocklong.

Billy was her first and only boyfriend. The pair starred in the local pantomime in Knocklong, Helen playing the fairy queen. In real life, Billy proposed to Helen in the Bourke’s boreen in Lackelly. Helen was 19.

“I was a bit taken aback alright. I didn’t expect it so soon. I didn’t want to tell my parents or anyone for a while,” she explains, owing to her young age.

The two were married on November 25, 1959 in Emly church, with the reception in Tipperary in what used to be Dobbin’s Hotel.

Helen’s going-away outfit was bought in Cork with the guidance of her sister Maureen. It cost £2.50 which their father, Captain Michael Joe Bourke, thought was “a fortune”.

Following the celebrations, the newlyweds left Tipperary “and we went to Nenagh via Kilcommon which is over the mountains and is a beautiful drive”.

From there, they toured Ireland. “We were to stay for a week but we ran out of funds around five or six days into it,” Helen smiles fondly.

From their base at Ballylooby House in Knocklong, the couple then started an equestrian holiday centre. They did that for about 25 years. “I hired out my first pony in 1937,” Billy recalls.

At 17 years of age, he got his first job on a film with Laurence Olivier and Vivien Leigh in Enniskerry, County Wicklow in 1943.

“My animal got sick and I wasn’t able to compete with him in the film,” Billy recalls.

“Laurence and Lady Vivien were staying in a hotel someplace else but they had a tent that they would visit. I was walking around doing nothing and my boss got me to tidy up their tent.

“One day, when I was finished tidying up, I had a deck of cards in my pocket and I pulled them out and I started to play patience. Lady Vivien came in and I was very upset that she was after catching me playing the cards so I taught her to play. We spent days then playing patience.”

Among the friends he made during his time running the equestrian centre was the former Taoiseach Charles J Haughey.

“I started hiring out hunting horses professionally in the late 1960s and as such got to know the famous Mr Haughey. I have all the diaries of all the people who rode the horses down through the years and what year it was and what horse they rode.

“His secretary would telephone in advance to advise us that he was coming. I would supply him with the horse at the hunt and then his driver would take me around in the car. He would wear his cravat and be dressed up. He was a very down-to-earth man. He was Minister for Justice then - it was around 1960. Everybody knew when he was out.”

Fifty-six years, four children, and 12 grandchildren after they wed, Billy and Helen are as happy as ever. Billy recently celebrated his 90th birthday in Ballykisteen surrounded by family including his four children John, Liam, Mary and Matthew.

The community then organised a surprise night for him in the community hall in Knockcarron the following Saturday night.

“We had Mass said by our local priest, Fr John Fitzpatrick, a Holy Ghost father who originated from Lackelly,” says Helen. “They had 95 chairs out in the community hall in Knockcarron but they hadn’t enough chairs for a finish.”

When Fr John spoke to Billy before the Mass and enquired about the special, happy days in his life, Billy paused for a long time and said: “I was happy every day”.

But what is the key to their happiness and long marriage? “People are looking to be happy,” Helen points out. “It is all about being happy. But I think if you get up every day and just get on with what you do, that you are automatically happy. I don’t think happy is anything extra special.

“I would like young people to know that they can be very happy doing just their daily things. In the old days, you wouldn’t dream of borrowing money for furniture or anything. You would wait until you had the price of it. You lived within your means.”

Billy, she says, is a man of great discipline.

“He has three meals a day and he’ll have a cup of tea now that he has got older, in the afternoon, and a bit of fruit before he goes for bed.

“He likes fresh veg and meat and potatoes. He wouldn’t be going in for spaghetti bolognese or anything like that. The breakfast is just porridge and toast.”

Billy, in his younger life, used to judge the Irish draught mares for the government. “He would be away for two weeks for that every year and he was in the FCA. We both went to America in 1971 – that was the big trip,” Helen smiles.

Billy is now president of the Knockcarron Community and would like to thank them sincerely for organising his birthday celebration.

And finally, the secret to his long and happy life? “Make the best of it while it’s there!” he says, with a smile.