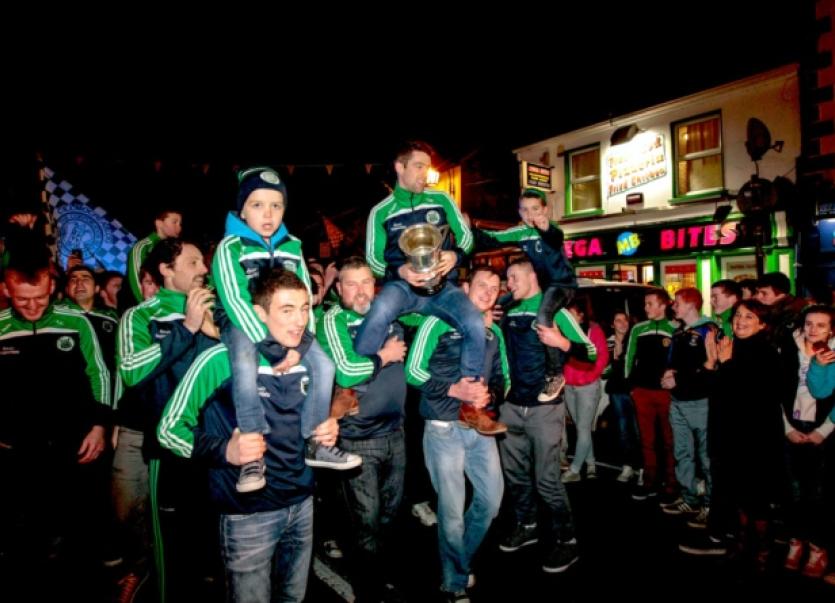 WHILE the Kilmallock hurlers were flying it on the pitch at the Gaelic Grounds for Sunday’s epic Munster final encounter, one of their teammates was literally in mid-air!

WHILE the Kilmallock hurlers were flying it on the pitch at the Gaelic Grounds for Sunday’s epic Munster final encounter, one of their teammates was literally in mid-air!

Forward Benni Burke missed out on Sunday’s historic win as he was on board a Malaysia Airlines flight en route to Australia to celebrate his father’s 50th birthday.

The flight tickets had been purchased by Benni Snr for his son months in advance of Sunday’s clash resulting in the Kilmallock man having the learn the fate of his clubmates on the other side of the world, via a text message.

“He was devastated to miss it,” commented Olivia Maguire, who drove her first cousin and his three year old son Ben to Shannon Airport on Saturday to catch their flight.

“The chat from him going in, in the car, was about some volcano in Europe and he was hoping it would ground the flights until Monday,” she smiled.

Dressed proudly in his club gear, Benni attracted the attention of a security guard as he went through the airport. It turns out the guard was part of the background team with Cratloe, Kilmallock’s opponents on Sunday.

Olivia gave Benni a blow-by-blow account of the game via texts but the first message didn’t deliver until just after 8pm on Sunday night. “I rang him straight away at around 8.10. He was only getting the messages. He wasn’t even off of the plane. He was in the air when the match was on. He was thrilled to hear they won.”

Benni attended the squad training on Friday evening and according to goalkeeper Barry Hennessy his words had a motivating effect on the team.

“We have a group and we all stay in contact with each other on WhatsApp and he was the first one on that morning to wish us the best and when he landed, he tuned in again. He was every part of the win as well as John Kelly, Paudie O’Dwyer and Shane O’Donnell.”

Barry, who pulled off two crucial saves in the opening quarter of the game, said Sunday’s Munster final victory was “what dreams are made of”.

“We had always talked about it and now to actually achieve it has opened our eyes. The ultimate goal is the final.”

The 25-year-old is a former student of Ardscoil Ris in the city where Cratloe stars Cathal McInerney and Conor Ryan were a year behind him.

As it happened, Cathal managed to sneak one past Barry on Sunday; in the end however it was the Balbec man who had the bragging rights.

“I briefly spoke to them afterwards. To be fair to them, it is hard to take two big losses in two weeks. I’ll touch base with them over the next couple of weeks.”

The heart always pounds for family and club on Munster final day and for Barry it was extra special to share the moment with five of his cousins who are involved in the set-up - Eoin Ryan and the O’Mahony brothers. Then there are the Mulcahy, Barry, O’Loughlin and O’Brien brothers who all play key roles.

“The way we look at it is there are 30 of us and we are a band of brothers,” said Barry who along with his teammates visited the schools and local businesses on Monday morning following Sunday night’s joyous celebrations.

“In fairness, the businesses have given tremendous support. Since the county final there is a great vibrancy in the town, and after the Munster final there were smiles on the faces and the town is a lot more lively again. The fact the games are on TG4 has given the town more profile. As the chairman, Steven Connery said, a lot of Kilmallock people who have gone abroad are tuning in as well.”

Hundreds of those living in the parish of the Medieval walled town left the comfort of their homes in Millmount, Emmet Street, the Green Road and Ballingaddy to turn out at the cross to welcome home the team and the winning connections at 8.30pm on Sunday. It was now over four hours since the ref blew it up, and the sheer ecstasy that comes with that winning feeling kept the blood warm in the bitter cold.

From the cross, lines of people followed captain Graeme Mulcahy - now carried shoulder high - and his teammates out through Emmet Street, in under the arch of Blossom Gate before arriving in the GAA grounds where many of this team first struck a sliotar and forged friendships for life.

While the shadows from security lights cast a faint hue over the eerily empty playing pitch, hundreds of people filed through the front door of the complex for the official homecoming ceremony.

Speaking from the balcony, Ger ‘Sparrow’ O’Loughlin described the Kilmallock team, standing shoulder-to-shoulder the length of the hall, as “an extraordinary bunch of individuals”.

“I think over the last couple of weeks that has been copper-fastened in the way they have trained and in the way they have conducted themselves. To be here tonight is no great surprise to me because this is a unique bunch of individuals who have that winning mentality and the one thing with hurling or any sport is, if you have that winning mentality, you will go a very long way.”

He spoke of how in certain towns and villages the game of hurling “is the life and soul of the village” and in Kilmallock from the very first day he arrived, “I could sense that”.

Former Kilmallock and Limerick hurler Paddy Kelly said Sunday was an occasion which would be “celebrated far and wide for a long time to come” and with that his former teammate Maurice Nelligan broke into a rousing rendition of Up the Balbec.

According to club secretary John O’Donnell the team will now take a week off before the serious business begins of plotting how to overcome Down and Ulster champions Portaferry on February 7. “We will be sitting down between now and then to plan the next two and a half months,” said John whose own son Kevin scored a point on Sunday. “I know each one of the team since they were Under 6 playing in the field, they are a fantastic bunch of lads what with their commitment to the sport and their dedication. They are a pleasure to work with.”