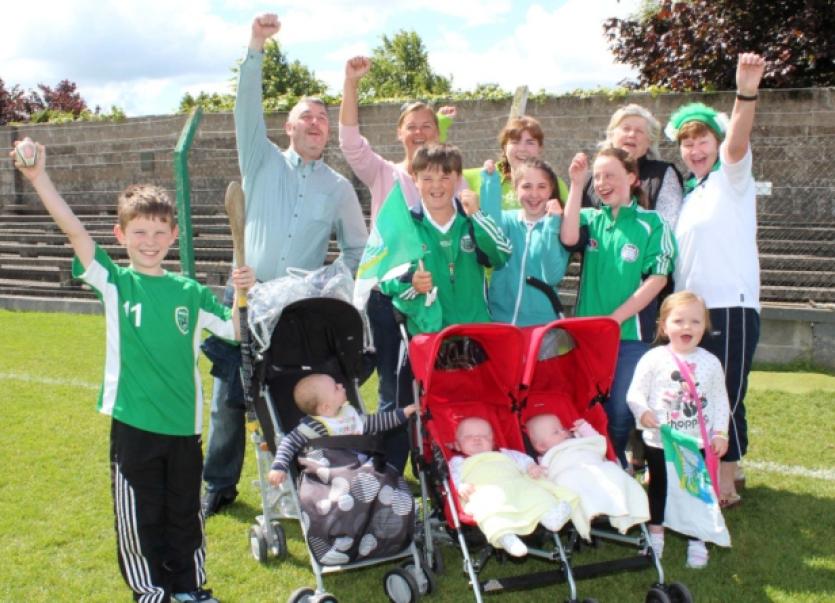 THEY may have slept through all the excitement that a Munster final week brings but their bloodline means that five-month old twins Shane and Amber Mulcahy are steeped in hurling history.

THEY may have slept through all the excitement that a Munster final week brings but their bloodline means that five-month old twins Shane and Amber Mulcahy are steeped in hurling history.

Their uncle Gavin O’Mahony lines out in the half-back position for the senior team against Cork on Sunday while their cousins Robbie and Conor Hanley are involved in the minor and primary school games.

“It’s brilliant for the town - it gives everyone a lift,” smiled the twins grandmother [Gavin’s mother] Marcella O’Mahony this Wednesday, as she, and around 30 of the Hanley clan prepare to take the road to Pairc Ui Chaoimh for Sunday’s big encounter.

Gavin, Robbie and Conor’s grandfather Tommy Hanley won an All-Ireland minor medal in 1958. Hurling is in the blood.

While Shane and Amber are staying at home, their older sister Marissa, 3, will be making the trip to Cork to show her support for the Kilmallock contingent.

The town is being represented by 10 proud parishioners on Sunday with players Gavin, Paudie O’Brien, Graeme Mulcahy, and Barry Hennessy involved in the senior set up along with selector and physical coach Mark Lyons, and selector Dave Clarke. Paddy O’Loughlin and Robbie Hanley play with the Limerick minors who take on Waterford while Conor Hanley and Lucy Chawke are both involved in the primary game.

“It is fantastic to have so many involved,” commented club chairman Steven Connery.

“On behalf of the club, we wish everybody the best of luck. There is a great atmosphere within the town and within the club. We are very proud of everyone involved. People are expecting good things so hopefully it will go well.”

While he said the club looked after supporters “as best as we could” in terms of tickets, there was disappointment that due to the reduced capacity at the Cork stadium, there were no family tickets available this year.

“That is a very disappointing factor. Families have been forced to pay over the top for tickets. The minimum that a husband, a wife and two children would have to pay is €120 and the maximum is €140 before they leave Kilmallock at all so we would be disappointed with that. We have noted that at a club meeting,” he said.

Parish Priest, Canon Willie Fitzmaurice who, it was announced this week, is departing Kilmallock after being transferred to Croom, says a big game is required from Limerick if they are to retain the title.

“After the Cork/Kerry game in the football last Sunday, it might be foolish to make predictions but Limerick won’t be afraid of the opposition,” said Canon Fitzmaurice who has been appointed as parish priest of Croom and Banogue after 19 years in Kilmallock.

“Going down to Cork is a big ask. They have learned from last year and they put in a great performance to win the Munster final.

“They know that any sort of complacency will be punished severely.”

Canon Fitzmaurice knows all about the pressure of Munster final day having being on the last Limerick team to secure back-to-back Munster final wins in 1980 and 1981.

“They have to be on top of their game,” he said of the current crop of players.

“Our back line has been stable and composed and that has to be the platform. Mid-field have played well but again, it will come down to the forwards. There is a lot of responsibility on the forwards. Supporters are going to be looking to them for a good performance. I think they are capable of much better performances than even the last day. To win the game will require a total display of committed teamwork from all the panel. They will have to be up to scratch. It’s a major game.”