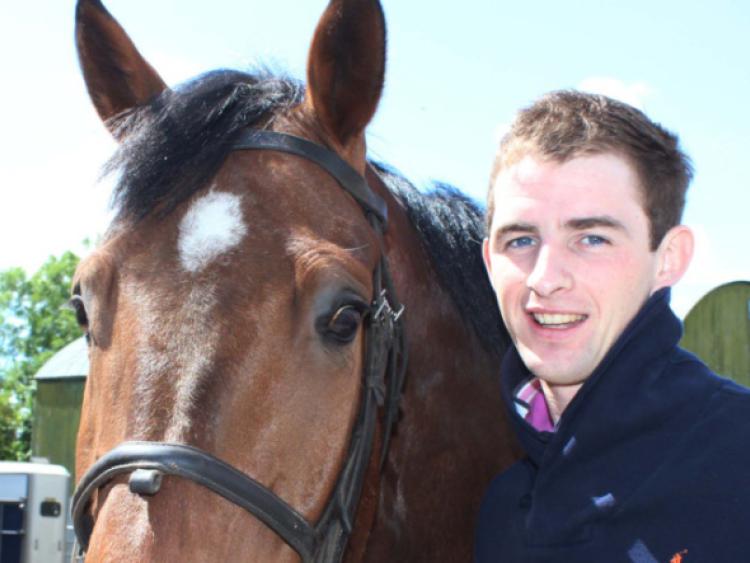 “MY heart is so set on going back.”

“MY heart is so set on going back.”

Almost a year to the day since a fall in Perth, Scotland left him in a coma, Brian Toomey has only one thing on his mind - returning to the saddle.

The 25-year-old Manister man is jumping through hoops these days to ensure his dream of racing again comes true.

He has been on a horse about 50 times since the accident but is in no doubt about the obstacles that remain in his way - the most notable being a medical clearance from the British Horseracing Authority.

To resume his career - the only job that he knows and loves - he needs that slip of paper.

“Because there is so much insurance in horse racing and because I had such a bad injury they will be so wary of letting me back,” he explains. “I have looked up loads of professional sports men, and women, who have had similar injuries to me and who have gotten back.”

The difference with Brian however, is, he is the only jockey who, having sustained such a serious brain injury - a substantial section of his skull had to be removed - has managed to ride a horse again.

“It’s tricky because no-one with an injury like this has been able to even get back on a horse not to mind go back racing,” he says.

This time 12 months ago, Brian’s parents Johnny and Marian, sister Aine and brother Sean were hanging on the every word of medics at Dundee’s Ninewells Hospital after he was pitched head-first into the Perth turf when his horse, Solway Dandy, fell at the third-last hurdle on July 4. He wasn’t expected to make it through the night.

This Friday, they will all gather in their local church in Manister where Aine will wed Jack Finn from Athlacca.

“I’ve my speech ready,” jokes the Yorkshire-based jockey this Monday.

“Obviously, I have had loads of falls in the past and broken bones - you remember all them things but I don’t remember a single thing about the accident so I don’t think it has affected me at all,” he says of his confidence in racing competitively again.

While he may not have any recollection of the fall itself, a constant reminder that it did actually happen is the five inch scar which stretches from his forehead to the back of his head on the right hand side; and a titanium plate which lays underneath it . The plate was inserted into his head “to keep my brain safe”, as he puts it.

He reckons there is a 30% chance that he will get the go-ahead to race again.

The chances of him getting refused the first time he feels is nearly at 90% “but I have so many people backing me”.

Determined to ensure that no stone is left uncovered in his effort to get back racing, he has put together a portfolio for the British Horseracing Authority which contains research on people who have sustained similar injuries and information on their recovery.

“Everyone who would be riding in the same race has just the same chance of risk of injury as me. I have had such good treatment and I have given it time,” he asserts.

A major factor in his favour, he feels, is that he has been granted permission to drive.

“A few months ago, I had to do a driving test to see if I was able to drive and I passed that. The British Racing Authority are a bit more easy going now because I am allowed drive. If you are allowed to drive on a road where there are loads of people, it reinforces that you are able to do lots of other things. They are really happy that I have done that.”

While Brian is full of gusto about going back racing, his parents are, understandably nervous.

Later this week, Brian will visit his cousin JT McNamara who suffered a serious injury during a fall at last year’s Cheltenham festival. The Croom man returned home to Limerick last month after spending almost 15 months receiving treatment in Dublin and the UK.

“It must have been very hard on him and his family, him being over there. I went to see him a good few times over there. He seems in great form when you go to see him.”

Looking to the future, Brian would contemplate a career in training, but racing is all he wants right now.

Whether Brian does get back racing or not, he is assured of positive support in his whatever area his career takes him.

The encouragement from the racing world, he says, has been “absolutely massive” with top jockeys including AP McCoy “telling me to keep the dream alive”.

“I appreciate everyone’s support - from family and friends, and everyone else. Even though I can’t be too positive because I don’t know what will happen, it does help when you have positive people around you.”