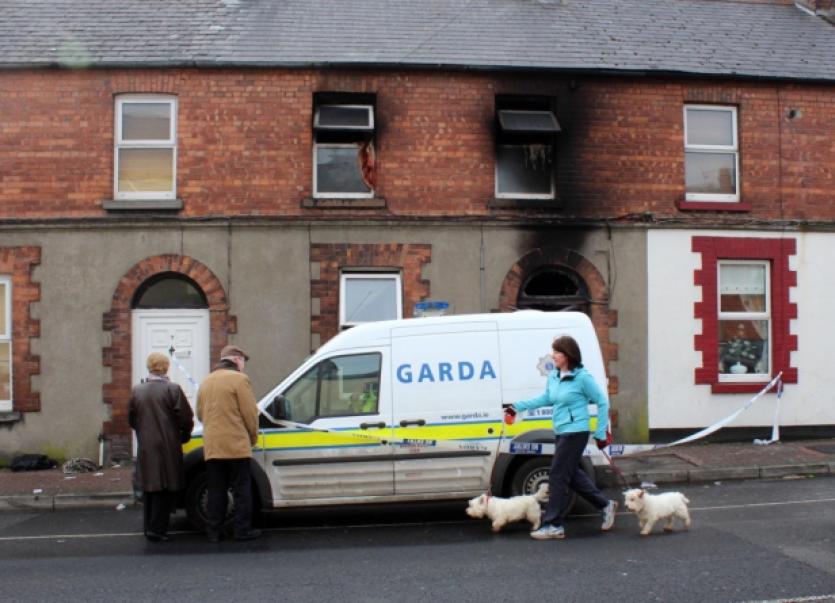 A MOTHER-OF-TWO was forced to jump from the first floor of her Limerick home along with her two children, after it was gutted by fire.

A MOTHER-OF-TWO was forced to jump from the first floor of her Limerick home along with her two children, after it was gutted by fire.

Natalie Murphy, 30, and her children Courtney, 11, and Jack, 3, have had their home and possessions destroyed following the blaze on Shelbourne Terrace, close to the High Road in Thomondgate, early on Sunday morning.

Three units of the fire service and five ambulances were called to the area at around 6am where the dramatic rescue took place.

Ms Murphy has been transferred to the burns unit at St James’s Hospital in Dublin, where her condition has been described as stable.

Her children were taken to University Hospital Limerick, where they were treated for burns and smoke inhalation.

During the rescue, the young children were lowered to the ground and were helped by passers by, who noticed the fire before the adults jumped.

The mother’s fall was broken by a taxi driver, who happened upon the scene. He suffered a broken leg as he caught the woman falling from the first floor window.

Two other male adults who were in the house at Shelbourne Terrace at the time also escaped the blaze.

Fire crews using breathing apparatus entered the house to check whether there was anyone else there and extinguished the blaze.

The area was sealed off for a forensic examination throughout Sunday.

It is not known what started the fire, but gardai removed some items from the premises to carry out further tests.

Ms Murphy - who turns 31 tomorrow - moved into her home in Thomondgate two years ago. Her father, Christy, works for Limerick City Council.

Local councillor Maurice Quinlivan said the incident has led to an “awful lot of shock and grief” throughout the area.

“We need to be grateful for the people who helped and possibly saved many people’s lives in this fire,” he said.

“My thoughts and prayers are with the people. This is a long and well established Thomondgate family ,and people would be prating and thinking about them, hoping everyone recovers.”

The fire, he said, highlights the poor condition some of the homes in Shelbourne Terrace are in.

Mayorstone Garda station are investigating the cause of the fire, and can be contacted at 061-456980.

In an unrelated incident on Saturday, a man in his 40s died after falling from the top floor of the Watergate flats. He was treated at the scene for severe injuries, before was taken to the University Hospital in Limerick, where he was pronounced dead a short time later.

Gardai are treating the matter as a tragic accident.