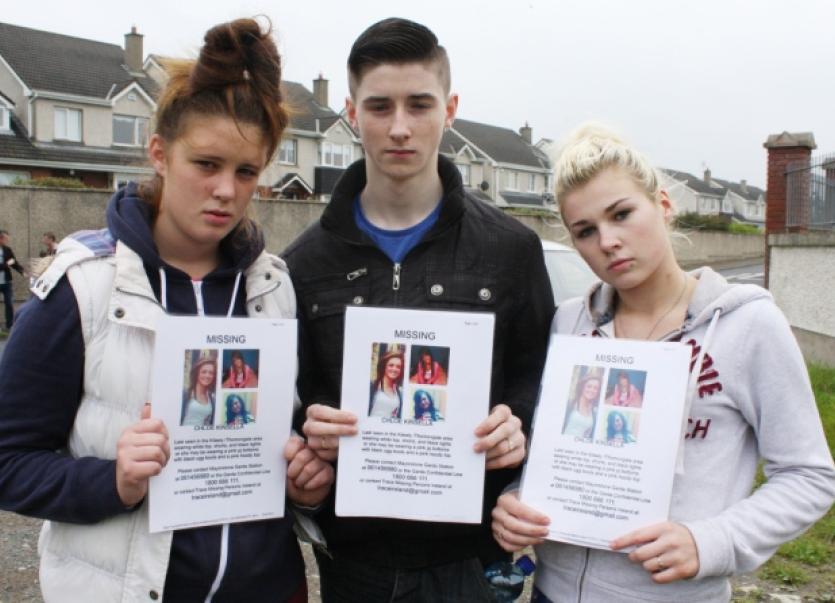 SEARCHES are continuing in Limerick this Tuesday morning for missing teenager Chloe Kinsella.

SEARCHES are continuing in Limerick this Tuesday morning for missing teenager Chloe Kinsella.

Hundreds of people have been taking part in the search for the 15-year-old schoolgirl, who went missing from her home on the north side of the city at the weekend.

Chloe Kinsella - a fifth-year-pupil at St Nessan’s College, Moylish - was last seen at her home at Kenyon Avenue, Kileely at around 8.20pm on Saturday.

Since her disappearance, gardai, assisted by hundreds of volunteers have taken part in searches for the teenager across the city. Some of the searches have focussed on the river Shannon near an area known locally as Donnelan’s Field, where there was one reported sighting of Chloe on Saturday night.

Classmates were allowed off school on Monday to assist in the search operation which also saw the deployment of the Shannon-based Air Corps helicopter.

As of Tuesday morning Chloe’s sister Lindsey said there was “no update” and that searches, involving Limerick Marine Search and Rescue, are “ongoing”.

Speaking at the family home on Monday, Chloe’s distraught mother, Shirley, said she was “devastated”.

“It is even more difficult when we don’t know where she is or what has happened to her,” said Shirley, who lost another daughter eight years ago.

Chloe’s sister, Lindsey, told the Limerick Leader she immediately became concerned on Saturday night when she realised her sister’s mobile phone was still in her room.

“She was out with friends and she arrived home at around 8-o-clock (on Saturday) and when we checked her room 20 minutes later she was gone,” she said.

“Myself and my mother went into the room at around twenty past eight and she was just gone,” added Lindsey, who insisted that Chloe would never run away from home.

Chloe had been socialising in the Caherdavin area earlier on Saturday night and one theory is that she may have tried returning to her friends.

“She probably left (the house) to go back to her friends but she left her phone behind and she changed her clothes so we don’t know what she has on her,” said Niamh Crowe, who is a friend of the Kinsella family.

The disappearance of the 15-year-old and the ongoing search operation was raised at City Hall on Monday evening.

At a meeting of the Home and Community Strategic Policy Committee (SPC) a message of support was conveyed to the youngster’s family.

Committee chairman, Cllr Tom Shortt, a secondary school teacher said: “We have to be mindful of Chloe Kinsella. People are vulnerable at different parts of their life.”

He added: “There were huge numbers of people her age out searching for her. It shows how much her age group was affected by this. Our thoughts are with her family, and hope there is a positive outcome.”

John Costelloe, who has helped co-ordinate the searches, says almost every part of the city has been covered.

“We have searched Caherdavin Moyross, Southill, Corbally, Garryowen but there has been no sign of her,” he said.

In addition to handing out leaflets with Chloe’s picture on them, members of her family and friends have also set up a page on Facebook.