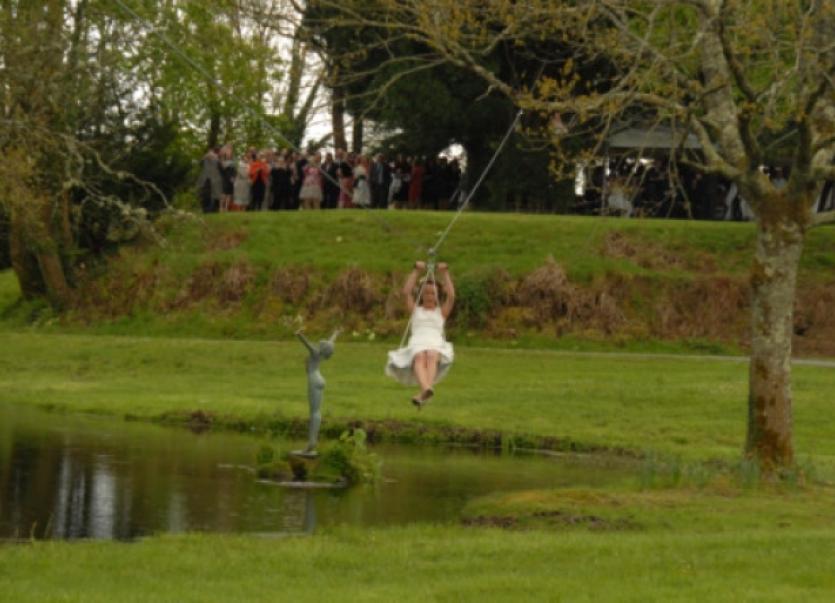 WHAT BETTER location to place a wedding ring on your bride’s finger than her family’s Bronze age ring fort.

WHAT BETTER location to place a wedding ring on your bride’s finger than her family’s Bronze age ring fort.

A hundred and sixty guests attended the unique celebration in Newport on Saturday.

Afterwards, Elizabeth-Jane in her vintage style, ivory, low back dress, took a short-cut back to the family home by taking a zip-line over a lake.

“We had a James Bond style exit,” laughed Elizabeth Jane, a barrister in Dublin.

She and Ray only got engaged in January.

“I hadn’t thought about the ring fort before but when it came to deciding where we would like to have it we thought it would be special.

“It is somewhere where I would have played a lot as a child. The fort is near the house and there are three very old yew trees.

“They are meant to be spiritual trees and we were saying that it would be a lovely setting,” said Elizabeth-Jane, who had five bridesmaids - Sarah-Ann O’Connor, Cora Hennessy, Emma Morrison, Jackie Boland, Roisin Lonergan.

The only thing that could spoil the setting and happy occasion was the weather.

“Dad showed me the satellite forecast for 4pm. There was a belt of rain to the north and to the south but Newport was completely dry. We were so lucky,” said Elizabeth-Jane.

It was a non-religious ceremony with Dara Molloy as the celebrant.

“We brought up a wooden table and he did the blessing using fire, water and oil so it was going back to old times,” said Elizabeth-Jane, who added that the wedding would not have been dissimilar to those in the Bronze Age.

Where they would have differentiated was the ending. Normally the groom sweeps the bride off her feet long before the wedding but in this instance it was afterwards.

“My mother suggested it as a joke but we said we would love to do it. Dad built a platform on a yew tree, we grabbed on to the zip and went over. It was great craic. All the guests were having a go,” said Elizabeth-Jane, who wished to thank her mum and dad, Stephanie and Ed, for their ”incredible preparation”. The family is completed by Michael, Stephen and Eoghan.

The celebrations continued in a marquee erected beside the house. The happy couple are now honeymooning in Hawaii.

Father of the bride, Ed Walsh, said it was a special day that brought family together from as far away as the Solomon Islands and Estonia.