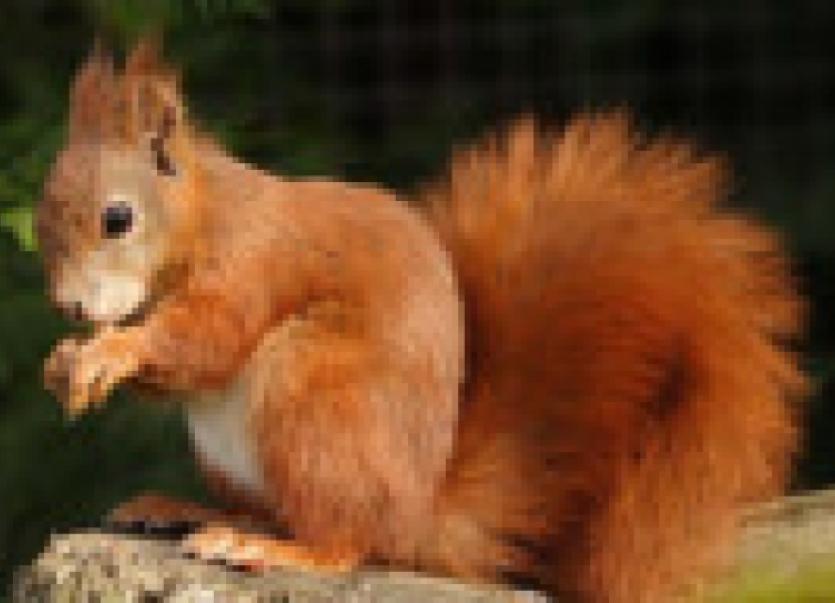 IT IS a wildlife comeback that has the village of Athea abuzz: for the first time in decades, a red squirrel has been spotted in the local area.

IT IS a wildlife comeback that has the village of Athea abuzz: for the first time in decades, a red squirrel has been spotted in the local area.

The rambunctious red rodent was recently sighted in forestry outside the West Limerick village, and locals have begun to speculate that he (or she) may be the vanguard of a squirrely revival.

Red squirrels have been deemed to be at risk for a number of years, most notably due to the rise of the bigger, fitter grey squirrel.

However Athea resident PJ Brosnan said that more and more sightings of the red squirrel locally have kindled hope that the species may be on its way back.

“My son Sean and his young lad spotted it out walking in the forestry near the old school in Knocknagorna. A few more people have started saying they’ve seen it too.

“Having them back in the forestry is unbelievable. It was decades since anyone last saw one around here. Some of the old timers would have been the only ones who could remember seeing them in Athea. It’d be very unusual, because the grey squirrel usually takes over and the red ones die off”.

Squirrels, as a whole, are far less common in the wild in Ireland than they would be in Great Britain, mainly due to the lack of dense forest which serves as its natural habitat.

Where red squirrels were typically found, over the past 20 years their numbers have been in rapid decline. Their apparent demise has been linked to the explosion in numbers of grey squirrels, who are faster, stronger and are able to hoard greater fat stores, diminishing the amount of food available for its smaller, lighter red cousins.

Grey squirrels have also shown themselves more able to adapt to the impact of humans on its habitat than red squirrels.

Mr Brosnan said that while it remains a mystery how the red squirrels have made it back to Athea, he has a few ideas.

“There’s been a lot of new forestry gone up in the last few years. That’s probably the reason. There might be a pair of them at least. They might be coming back.

“The last place I saw one was in the Phoenix Park, and that was a long time ago. I used to go to college up in County Down, and I saw a few of them there as well”.