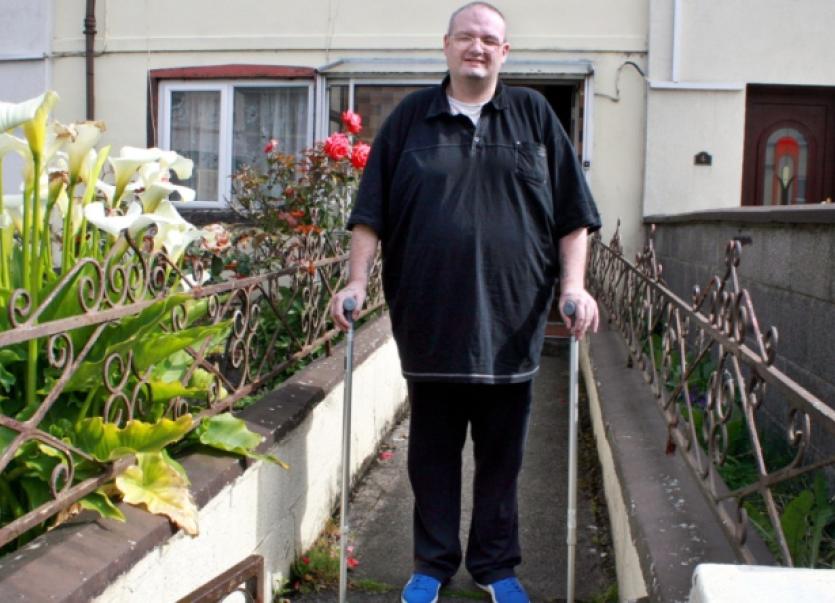 FOR 32 years, Edward Williams walked to his mother’s grave at Mount Saint Lawrence in Limerick city every day. But when the 40-year-old was diagnosed with multiple sclerosis (MS) three years ago, he was no longer able to maintain it.

FOR 32 years, Edward Williams walked to his mother’s grave at Mount Saint Lawrence in Limerick city every day. But when the 40-year-old was diagnosed with multiple sclerosis (MS) three years ago, he was no longer able to maintain it.

Edward also used to cycle back and forth from Southill and his home at Sean Heuston Place. However, three years ago, the Limerick man began to feel ill and lose balance on the bike. But he admits he never thought anything of it.

The symptoms got worse and he started to fall off his bike more frequently, so he decided to visit the doctor. That week, a neurologist diagnosed him with MS, a disease that disrupts the body’s nervous system.

“Before I was diagnosed I was feeling very sick and I was getting weaknesses down both sides of my body. Then I went to the hospital and they sent me home saying there was nothing wrong, and then I felt sick again that night, and they then told me it was a stroke. I had an MRI at 3am, and I was sent to a neurologist and when the results came back, he told me that it was MS,” he explains.

Edward lives in a two-storey house in the city centre, but he says if he goes up the stairs, he is not able to make it back down.

Though he can walk with the help of crutches, Edward depends on his nephew who takes him from A to B in a wheelchair. The first two years after the diagnosis, he admits that his condition angered and frustrated him.

“I can’t go anywhere on my own. Someone has to be with me every time in case anything happens. My grandfather died 18 years ago, and he was in a wheelchair as he had one leg, and it was me who used to look after him.

“I brought him everywhere in the wheelchair, we went everywhere. And now, I depend on people to wheel me around. It doesn’t feel right, but there’s nothing I can do about it. My nephew comes down and brings me wherever I need to go.”

However, he has been feeling more positive in the past few months, as he is coming to terms with his condition.

He says he has been keeping himself occupied with Tuesday night dances, hours at the Dunraven Day Centre and getting involved with the local Wheelchair Association.

“I felt angry when it first happened. I kept on saying ‘Why me?’ I couldn’t understand why it would happen to me and not to someone else.

For Edward, the first year was not as bad as the second, as the symptoms were not as severe then.

“The first year being diagnosed wasn’t too bad. But then the symptoms started getting worse. I got a terrible pain in my back, in my hands and I got pins-and-needles all down my legs. I have them the whole time now. And the physical symptoms stopped me from doing things, so I mostly go out on my wheelchair,” he explains.

Of all hobbies, however, he misses the cycles to Southill and visits to his mother’s grave.

“For 32 years, I walked to my mother’s grave every day. But the last time I was there was Mother’s Day - my nephew brought me up. It is tough, as I used to go to the graveyard. I used to look after the grave and clean it up, but now if I bend down, I need someone to help me up. If I bend down, I can’t get up on my own.”

Edward says he gets help from the MS Society and from his physiotherapist in Dooradoyle, where “I can talk things through with them and they have been very helpful to me”.

When asked what advice he can give to others experiencing the same condition, he says: “In time, you will look to the future and the positive outcome.”

Edward says he prays to his mother Marie Williams every day, who passed away at the age of 28. And though she has been gone for 32 years, he believes that she looks down on him every day.

That, he says, is what makes him positive about the future.