Journey of sorrow: beautiful innocent is laid to rest in Mountcollins 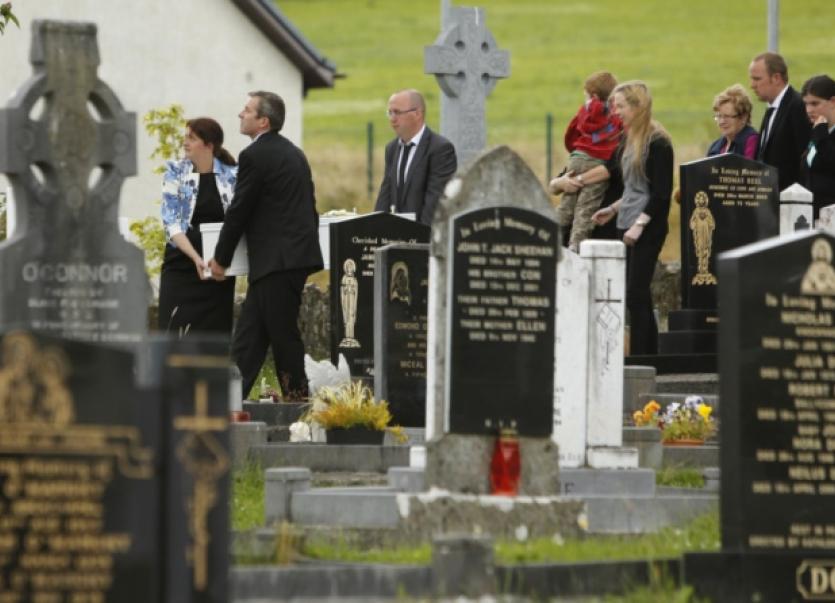 A TERRIBLE grief that must, somehow, be borne, a journey of sorrow that will endure forever: this is now the tragic reality for the parents and family of David Roche, the two-year-old who drowned at his home in Mountcollins on Sunday.

A TERRIBLE grief that must, somehow, be borne, a journey of sorrow that will endure forever: this is now the tragic reality for the parents and family of David Roche, the two-year-old who drowned at his home in Mountcollins on Sunday.

And over the three days until the little boy was buried, just yards away from the church where he had been baptised, the community of Mountcollins reached out to David’s family, wrapping them in the consoling embrace of friendship and shared loss.

“We will honour David’s young, innocent, rogueish, beautiful life with our liturgy. We will ask the Lord to give you, his family, the strength to cope.,” Fr David Kennelly said, speaking at the simple but deeply moving Mass of the Angels which took place in Mountcollins on Tuesday afternoon. And his hope was that the support and prayers of the community would be of some consolation and hope to them.

Earlier, the other celebrant at the Mass, Fr William O’Gorman, spoke directly and with deep emotion to David’s parents, Brigid Bergin and Micheál Roche. “It is difficult to put words on your feelings and the feelings of all the members of your families. You have experienced so much recently, the birth of your beautiful daughter Kate, now the loss of David. We as a community are all feeling for you and concerned and sad with you. Since Sunday, the whole area is in deep shock but how much more for you,” Fr O’Gorman said.

“Indeed, it is times like this our faith is challenged,” he added. But he continued, there was “no doubt”, David was now a saint in Heaven.

In his homily, Fr Kennelly quoted the late John O’Donoghue, who said that “the most important thing for any human being, man or woman, in their whole lifetime is to have the experience of being loved”

But it was also clear that even at the age of two, David Roche had developed his own, very distinctive personality: a lively, energetic boy with a spirit of adventure, a caring lad who liked to feed the crows and a young soul with a great capacity for making friendships.

Among the gifts brought to the altar by his cousins, were a toy tractor and book on farming, symbolising his rural roots and love of farming.

“He was a chip off the old block,” a family member said from the altar.

A bottle of bubbles signified his adventurous spirit, the congregation was told and as a bag of stale crumbs was brought up to the altar, the congregation was also reminded that David always”taste-tested” the bread he threw to the crows. A cuddly toy was testament to the fact that he was still only a child.

Prayers were said and thanks given to the members of emergency services who reacted following the accident on Sunday when David drowned in a shallow amount of water in a container near his home.

He was found by a family member and brought to Limerick University Hospital.

“We cannot judge a biography by its length nor by the number of pages in it. We must judge it by the richness of its contents.

“We cannot judge a song by its duration nor by the number of notes in it but by the way it touches and lifts our souls,” a family member spoke to the congregation as the Mass concluded.

Sometimes, he continued, it is the unfinished melody which is the most captivating.

And if this melody lingers on the air, is it unfinished or endless, he posed the question.

Green balloons were released into the hills around Mountcollins as David was buried but for his parents and all the members of the Roche and Bergin families, the memory of him, their beautiful boy, will linger always.