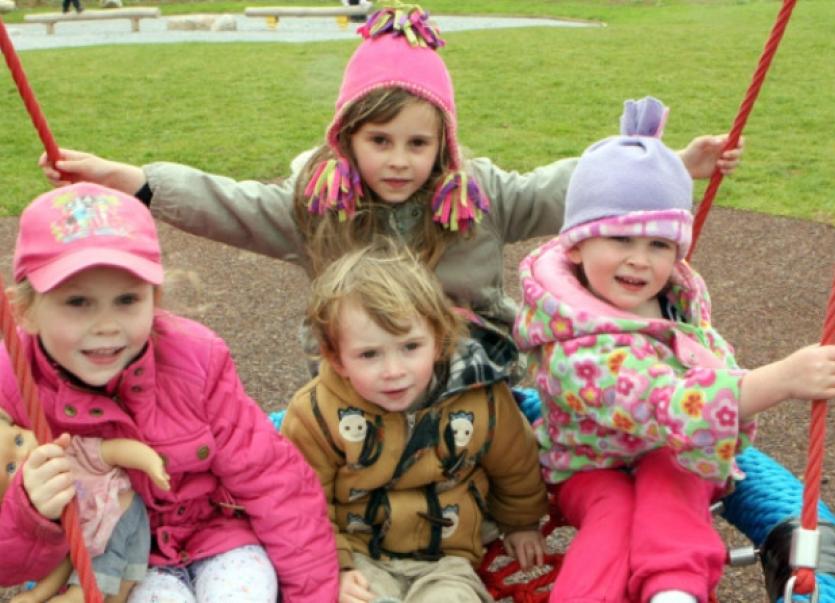 The first all-abilities playground in Limerick was officially opened at the 25-acre Manor Fields complex in Adare at the weekend.

The first all-abilities playground in Limerick was officially opened at the 25-acre Manor Fields complex in Adare at the weekend.

Over 800 children and adults joined the committee members of the Adare Recreation and Community Complex (ARCC) for the opening.

The completion of phase one of the development which includes the playground as well as entrance and parking facilities was supported with grant aid of over €334,000 from West Limerick Resources under the Rural Development (Leader) programme.

However this is just the beginning of the project as the group plans to fully develop the whole site on a phased basis over the coming years to include a synthetic pitch, tennis courses, cricket oval, additional multi-purpose pitches, walking trails and pavilion building incorporating changing facilities.

The all-abilities playground has been designed to be as inclusive as possible. This ethos was evident at the ribbon cutting and official opening which was conducted by two children, Stephen Curtin who is wheelchair bound and his friend Sara O’Farrelly.

Children and adults alike enjoyed the playground, while Limerick Cricket Club held a match on what is now their home ground in Adare and soccer, football and hurling was played on the other pitches.

Bubbles the Rainbow Dragon was read by children’s author Anne Marie McCarthy on the Storyteller’s Chair as the enraptured children blew bubbles, adding to the carnival atmosphere on the day.

Speaking at the event, ARCC chairman James Collins thanked Tom and Judy Kane of Adare Manor for donating the land to the community, West Limerick Resources for their continued support and for grant-aiding the project. The project has been delivered on time and is debt free and special thanks went to Peter and Carolyn Lynch through The Ireland Funds, The JP McManus Pro-Am Trust and Limerick County Council. He also praised the design and construction teams for the work they did in bringing the vision of the committee to life.

On the day the ARCC committee also launched its fundraising initiative for the next phase, which is the construction of an all-weather pitch to accompany the three pitches which have already been installed on the site. In total it is estimated the development of the entire 25 acre site will cost in the region of €2m to complete. People who would like to support the project can become a Friend of The Manor Fields and sponsor a square metre of the synthetic pitch for €100, become a patron of the facility and buy a tree for €250 or sponsor a piece of the playground equipment a list of which is available from the committee members.