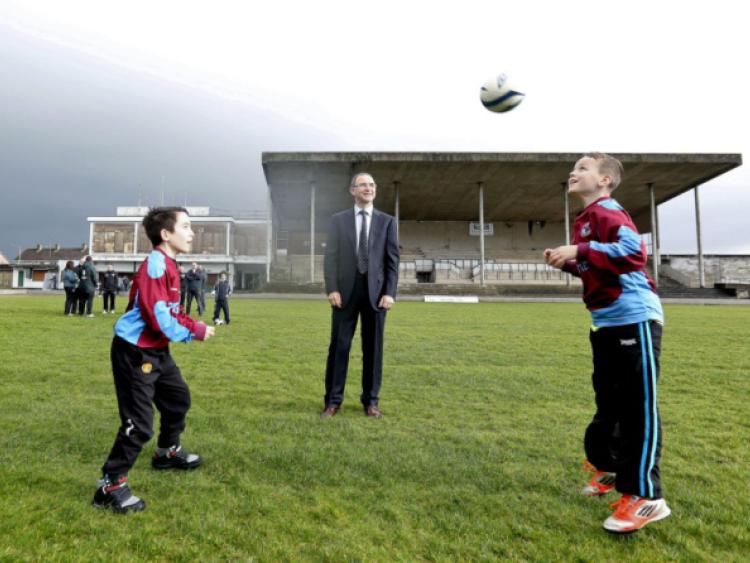 IRISH soccer manager Martin O’Neill cast his eye over the newly laid surface at the spiritual home of Limerick soccer on a visit to the city last week.

IRISH soccer manager Martin O’Neill cast his eye over the newly laid surface at the spiritual home of Limerick soccer on a visit to the city last week.

The Irish boss, who was in Limerick to name his squad for the upcoming friendly against Serbia, was visibly impressed with work on the Markets Field project, which Limerick Enterprise Development Partnership hope will be open for play by the end of year.

“Obviously I didn’t know what it was like beforehand, but I can get the impression from what it might have felt like,” he said, surveying the scene on the pitch, which was re-surfaced at a cost of €400,000.

“It is great to be able to see it reawakened again after all these years. It is obviously going to be excellent but really it is nice to be again part of the town. I have just been listening to the history of the place, and it is remarkable and it is delightful that it is coming back again,” he added.

O’Neill happily signed autographs and posed for pictures with children who were showcasing local authority and FAI-funded projects in the city.

The Irish boss had a quiet word with Roxboro Garda Niamh Briggs, who was preparing to head to Twickenham to face England for the Irish women’s rugby team, and played a part in securing the visit of the Irish boss through her community-based development work with youngsters.

George Lee of the LEDP, recently awarded €1.1m from Government to develop the ground, explained how it would shape up to O’Neill.

Speaking afterward, he said: “We are delighted to have Martin O’Neill here and we are looking forward to him coming back when the pitch is up and running again.”

The ground, when finished, will have a capacity of 3,075 and it is ideally hoped that Limerick FC would play matches under licence during the 2015 season, with facilities also catering to rugby and GAA.

“We have just gone through the planning process and are ready to go out to tender on our design team. All of that will be done in line with public procurement and after that then we are into contractors and we would hope that they could be on site by the middle of the year,” said Mr Lee.

“Further facilities will all be put in place over the next couple of months as part of the planning. We would hope that by the end of the year, the pitch would be in good enough stead for them to come back if they wish to,” he added in reference to Limerick FC.

O’Neill later spoke at a Limerick FC fundraiser in Thomond Park, where club chairman Pat O’Sullivan unveiled plans for the club to move to a new training facility in Bruff.