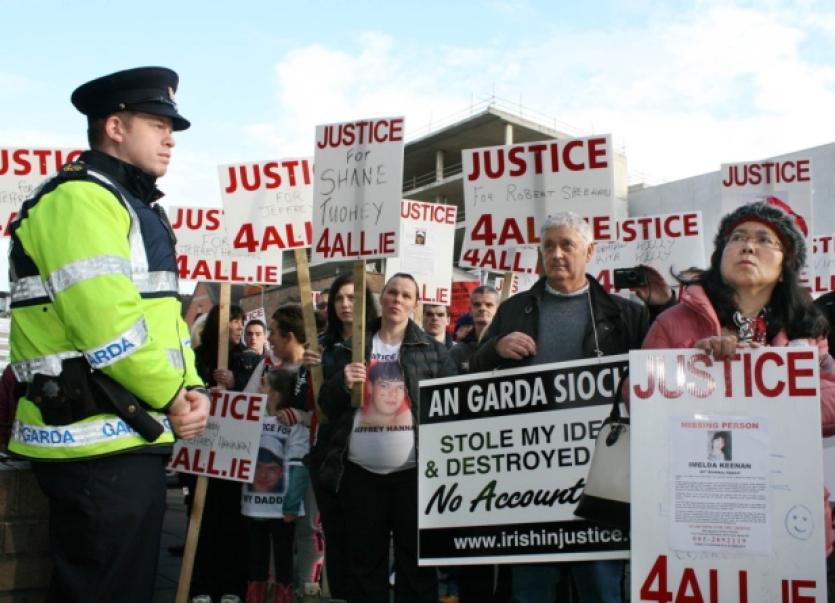 DOZENS of people including relatives of several Limerick murder victims attended a protest outside Henry Street garda station as part of the Justice4all campaign.

DOZENS of people including relatives of several Limerick murder victims attended a protest outside Henry Street garda station as part of the Justice4all campaign.

The campaign, which is being spearheaded by independent TDs Luke ‘Ming’ Flanagan, Clare Daly, Mick Wallace and Joan Collins seeks to end what they claim is systematic corruption within An Garda Siochana.

The garda commissioner, Martin Callinan, and the minister for justice, Alan Shatter, were severely criticised by some of those who spoke during the protest.

Dissatisfaction was also expressed in the way in which the Garda Siochana Ombudsman Commission (GSOC) currently operates.

Alan Hannan, whose son, Jeffrey (19), was murdered in Southill more than six years ago was one of those who took part.

He is calling on gardai to re-examine the circumstances of his son’s killing in the hope that his killers can be brought to justice.

“If they put a four man investigation team into it and get all the evidence and look through it all again, I think myself that Jeffrey’s murder will be solved,” he said.

Sandra Bennett, whose son, Darren(18), died after being stabbed in Moyross in March, 2009 also took part in the protest.

“I’d love justice for my son for Christmas, that’s all I want, he was murdered in 2009 and everyone knows who done it, even the gardai know but they just don’t seem to be getting anywhere,” she said.

“From the bottom of my heart, I would to appeal to anybody who knows anything to come forward,” she added.

Relatives of Robert Sheahan (21), who was shot while attending a family wedding in Bunratty last year and Patrick O’Donoghue (22) who was last seen in Caherdavin 13 years ago also attended.

A letter addressed to the head of the Limerick garda division, Chief Superintendent, David Sheahan, was handed in at Henry Street garda station during the protest, which went off without incident.