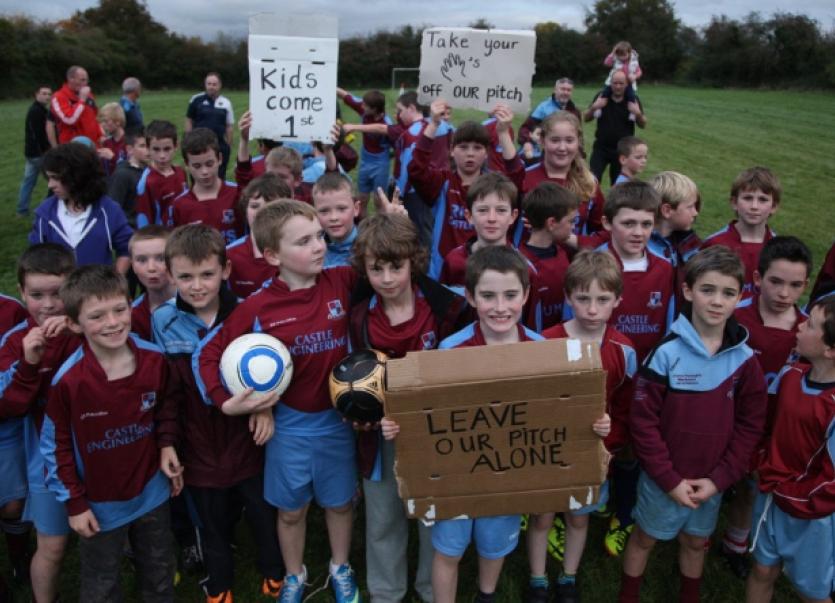 A LIMERICK soccer club which has been raising funds to buy the pitch they have rented for over 20 years has unwittingly found itself in a bidding war with the “deep pockets” of the son of Euromillions lottery winner Dolores McNamara.

A LIMERICK soccer club which has been raising funds to buy the pitch they have rented for over 20 years has unwittingly found itself in a bidding war with the “deep pockets” of the son of Euromillions lottery winner Dolores McNamara.

Members of Lisnagry FC fear that their 12 juvenile and junior teams will be effectively homeless in the coming days if they lose the right to play at The Hermitage in Castleconnell.

Club officials believed they had an understanding with the estate of the late landowner that they could buy the pitch if they met an asking price of €75,000. Having raised the finance and staged a fundraising campaign in recent weeks, they believed they were close to signing a contract for the purchase of The Hermitage.

They now fear that over 200 players, the majority children, won’t have a pitch on which to finish the season after a rival bidder emerged and beat their offer three times.

The club spokesperson who spoke to the Limerick Leader declined to comment on the detail of the bidding process. But further investigations by this newspaper have established that the rival bidder is Gary McNamara, son of Dolores McNamara who won €115 million in the Euromillions jackpot in 2005.

A source close to Mr McNamara also spoke to the Limerick Leader this week and denied that his bid was made to frustrate the club’s ambitions.

“In the first instance, he was approached by the family who own the land. He was told that the soccer club had made a bid but they had only €15,000 and that was not acceptable to them,” the source said.

The claim that the club only offered that amount is totally rejected by sources at Lisnagry FC who say they have offered as much as €86,000 for the land this week.

Mr McNamara built a luxury €1 million, 4,200 square foot house beside Lisnagry FC’s rented grounds in 2007 and didn’t endear himself to his new neighbours when he drove on to the pitch in the middle of an underage match in November of that year. He claimed to have done so because he was fed up of the entrance of his house being blocked by cars during matches.

A spokesperson for Lisnagry FC said this Wednesday: “We are devastated over all this because we have put so much work into this over the last two months. We were of the impression that our bid would be accepted, then we find we are in a bidding war with another individual and we just can’t win the fight.”

“I can’t overemphasise the work we did over the last couple of weeks to secure funding to buy the field. We were successful in that. We actually raised the asking price. I don’t want to go into the nitty-gritty of the figures but we were given a price that they would be happy to accept and we secured that through fundraising and other means”.

The source close to Mr McNamara also insisted: “There is no agenda or malice involved in his bid, the fact is the property is adjoining his house”.

“I wonder if a local farmer or another member of the community made a bid would there be an objection? No is the answer. It is because who Gary is, that here is all this protest,” he added.

The source also pointed out that the soccer club had a second pitch in the area.

That pitch, at Scanlan Park, is leased from Limerick County Council but requires significant drainage works and is unplayable for much of the season, members of the club say.

“While it looks like we still have a pitch, we actually haven’t because Scanlan Park after two matches down there last Saturday was a mudbath,” said a spokesperson.

And one pitch alone could not possibly accommodate the number of fixtures the club plays.

While many in the community say the club is being unfairly gazumped in a battle it can’t win, another member of the club said no blame could be attached to the independent executor of the estate who had a duty to accept the highest offer.

The club now fears they are about to lose their pitch and is urgently looking for solutions.

“We have secured funding to buy somewhere and we are just hoping that someone somewhere might come up with a solution for us. There might be somebody out in Castleconnell who might have a bit of a land who might say ‘Do you know what? You can use this as a temporary ground’ or somebody might be able to throw out one or two solutions to us. They can get in touch with us at lisnagryfc@outlook.ie,” the spokesperson said.