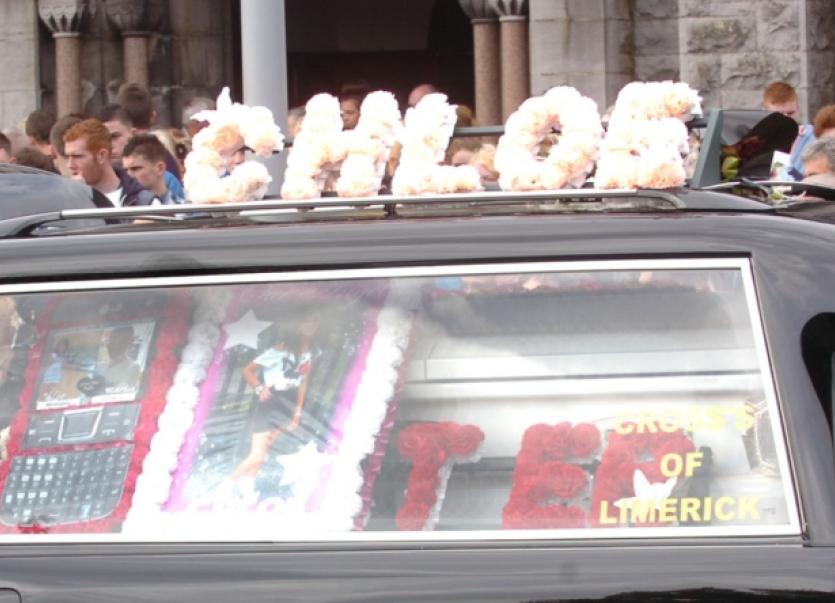 A GROUP of teenage boys tip-toed nervously up the stairs in St Munchin’s church, back-tracked and proceeded again towards the balcony.

A GROUP of teenage boys tip-toed nervously up the stairs in St Munchin’s church, back-tracked and proceeded again towards the balcony.

With diamond studs in the ears, and fashionable hair-cuts they could have been shoe-ins for the X-Factor, sitting comfortably in front of Louis Walsh.

Here, they were in alien territory; in the domain of adults, in places where they should only see their grandparents remembered.

It should not be a place for children to pay their respects to other children, and yet it tragically is, with increasing and frightening regularity.

At the funeral mass, Fr Pat Seaver disclosed that this has been the third tragic death of a pupil at St Nessan’s school since the summer months, and they wanted to send one message out to the congregation of largely young mourners as loud as they could on a solemn occasion.

The boys continued to linger on the stairs - awkward, vulnerable, uncertain of what to do or how to act, a mixture of the valiance and fragility of youth.

It was a scene at odds with life itself; seeing the tears of young people who have barely begun to live their lives struggling to comprehend the death of someone equally as young.

As hundreds regretfully said farewell to 15 year-old Chloe Kinsella - whom we didn’t know, but who had grown close to our hearts - the congregation was not a sea of black coats and morbid dressing.

There was a discernible scattering of pink, in solidarity with Chloe, in recognition of the bright and bubbly girl she was, her love of fashion, her fun nature.

Her picture, which appeared in every newspaper in the days following her disappearance, painted a thousand words and captured the emotions of every parent.

An image that had the power to strike a chord with every daughter who saw something of her younger self in that beautiful, blue-eyed girl - a girl on the cusp of entering a new, more exciting period in her life, when it was tragically ended.

A champion hip hop dancer who performed in front of the President, Chloe was an extremely likeable, friendly young woman, full of potential and in love with life. Whatever happened, hers was a life - like many others - cruelly extinguished long before its time, without any rhyme or reason.

The pink stood out luminous and bright, on a day when broken hearts were cast in darkness and in shadows.

There were pink tracksuits, jeans, hoodies, tops, even the bows in their hair, bouffanted and piled high on their heads.

One young girl was wearing a jumper with Justin Bieber’s face emblazoned across it, as she text urgently on her mobile phone.

The day before her disappearance Chloe and her sister Marguerite had queued in the city to buy tickets to see One Direction.

One of the floral wreaths was a photo montage of her and her friends, beloved of teenage girls celebrating happy times together.

‘Best friends forever’, it read. There were many others - ‘friend’, ‘sister’, ‘daughter’. A daughter who was “kind, loving and soft-hearted”, mourners heard. She loved chatting to her mum Shirley, and making cups of tea for her dad Kevin. “But she is gone now,” said Fr Seaver.

Heads were bowed, hands clasped, fingers intertwined, as sniffles were stifled in the back of the church.

There was a round of applause, and another, and another, as John Costelloe spoke of the search in the days leading up to today, when they had hoped and prayed for a very different conclusion. He said he’d “like to think there’s a bit of Chloe in everybody here”.

Outside, dozens more people lined the walls of Clancy Strand. They had their backs to the river, downstream from where Chloe’s body was found on Friday last. It was a short distance from her own home in Kenyon Avenue, Kileely.

Her longest journey came this Monday, as her remains were brought from St Munchin’s church to Mount Saint Oliver cemetery, where she was buried alongside her sister Sophie, who died aged three in 2004 from a heart condition.

Her family delicately planted kisses on her coffin and laid their hands gently on her for the last time.

As her white coffin was lifted into the hearse, and all the floral tributes and sympathy cards were packed away, an army of supporters followed behind her. It was reminiscent of the search team which had scanned “every bush, every briar, every derelict house” for her days earlier. Search co-ordinator John Costelloe said he queried one night whether there was a Munster match on such was the strength of the numbers.

As those numbers began to disperse, one young man cast a lonely figure by the church door, looking down at the single red rose he held in his hand. Sadly, he would never get the opportunity to hand it to her in person.