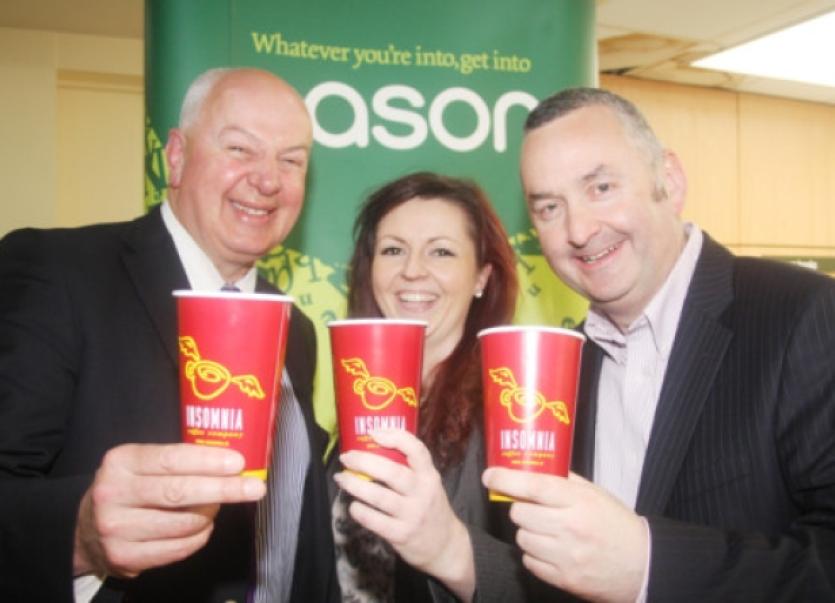 DRAGON’s Den star, Bobby Kerr is hoping his investment in a new coffee shop in Limerick city centre will pay off over the coming years.

DRAGON’s Den star, Bobby Kerr is hoping his investment in a new coffee shop in Limerick city centre will pay off over the coming years.

Insomnia, which is Ireland’s largest independently owned coffee shop chain has opened its first coffee shop in Limerick - at the Eason store on O’Connell Street.

Six people will be employed by Insomnia, which is located on the second floor in an area which was previously home to the music and computer departments of Eason.

The new coffee shop also overlooks Cruise’s Street as window’s which were previoulsy sealed were opened up as part of the refurbishment..

In recent months, Insomnia also has also opened coffee shops at the Eason stores in Dublin, Cork and Galway and has more than 60 other outlets across the country.

“We are renowned for our quality fairtrade coffee, customer service, great value and amenable store atmosphere we are delighted to open in the heart of the city. It’s a very special opening for our Chairman Bobby Kerr as he has very strong Limerick links with lots of his family living in the city,” said Harry O’ Kelly, CEO of Insomnia.

Mayor of Limerick, Cllr Gerry McLoughlin, said he hopes Limerick people will support the new coffee shop, the opening of which, he said, is another boost to the city centre.

“It is lovely to come into a wonderful establishment like Easons and to able to relax and have a cup of coffee and have a chat with someone,” he said.

Lynn Byrne, area manager with Eason, said the opening of the Insomnia premises is the first phase of major refurbishment works at the O’Connell Street store.