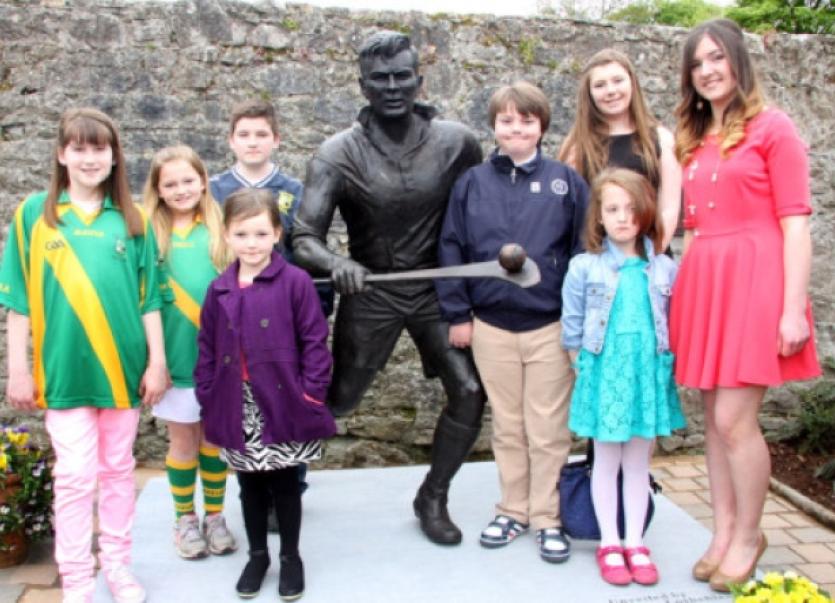 A HUSH descended over the huge crowd in Castleconnell as Ann Mulqueen sang Mick Mackey and his Men before his statue was unveiled.

A HUSH descended over the huge crowd in Castleconnell as Ann Mulqueen sang Mick Mackey and his Men before his statue was unveiled.

Mick Mackey and his fellow Limerick men, women and children turned out in force to see the bronze masterpiece on Sunday.

The 98-year-old Knockainey man and Tony Herbert are the last two survivors of the 1940 All-Ireland-winning team. A special cheer went up when Ms Mulqueen sang “Tis Tommy Cooke, with slash and hook”.

Mr Cooke told the Leader, with a wink, that he had come from the Regional Hospital and had to go back that night, but he wouldn’t miss Sunday’s celebrations for the world.

“Mick Mackey lived for his hurling. Once he got the ball in his hand he was very hard to stop. He was just a natural,” recalled Mr Cooke.

Another honoured guest was John Mulcahy, Cappamore, who also played with the great man. He belied his 89 years to demonstrate Mick Mackey’s solo technique.

“He was not a big man but fierce strong. You couldn’t get the ball off him. One time he knocked four men in a row,” said Mr Mulcahy.

Chairman of Ahane GAA Club, Turlough Herbert, said that unfortunately his uncle Tony was not present but was very much there in spirit.

In a passionate speech, Mr Herbert said what Mick Mackey has done for Ahane GAA club and Castleconnell is unquantifiable.

“This is a historic and great day for the village. He was the first superstar of the GAA and gave the Munster championship its glamour and romance when he played in those thunderous Munster finals,” said Mr Herbert.

“There were others, of course, his brother John and father Tyler; Mick Hickey; Timmy Ryan; Paddy Scanlon; the Herberts, Paddy Kelly, many more, too many to mention,” said Mr Herbert.

He thanked all involved in making the day happen, those in attendance and especially Ballyhoura for 75% funding. A souvenir programme gives a detailed list of all involved. Mick Mackey’s daughter, Ruth, said the statue was a great honour. All Mick’s accolades came on the pitch, but off it he was a wonderful father and grandfather, said daughters Ruth and Audrey.

On behalf of the Mackey family, Pat thanked the club committee and anyone who contributed to the erection of the commemorative statue. “We feel it is a wonderful tribute to our father and thank everyone for their time and commitment to keeping the memory of him alive,” said Mr Mackey. MC Johnny Meskell Snr noted that Mick Mackey had never been kept under wraps for so long and with that GAA president, Liam O’Neill, did the honours.

Sculptor Seamus Connolly said he felt it is the best piece he has ever done – and Mr Herbert said you could see he has lived Mick Mackey for the last six months.

“The great debate on who was the greatest hurler always comes down to Mick Mackey or Christy Ring. Only two of the thousands to play the game, that is the reason for the magnificent edifice behind me,” he said.