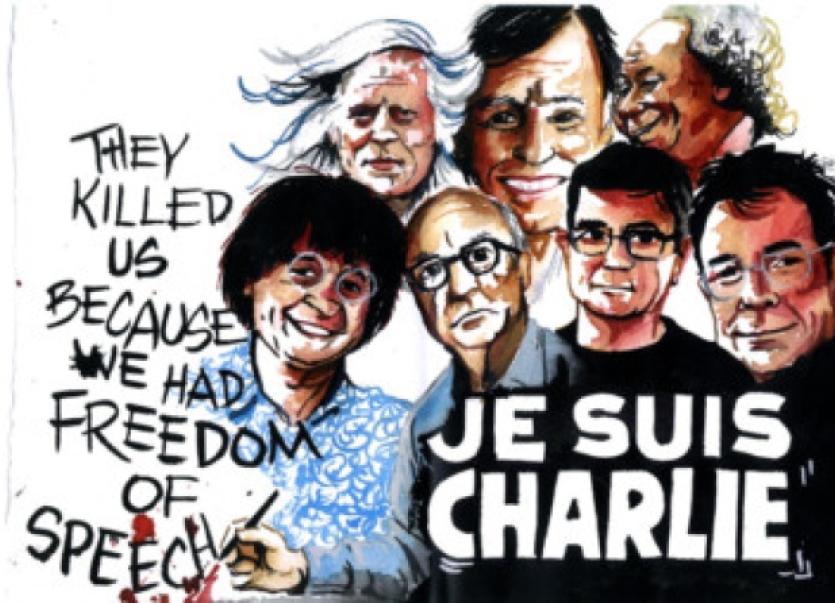 The abbot of Glenstal Abbey, Mark Patrick Hederman, has described the move by journalists at the Charlie Hebdo newspaper to publish another cartoon of the Prophet Muhammad on its cover this week as “dangerous” and warned that they should expect a “backlash”.

The abbot of Glenstal Abbey, Mark Patrick Hederman, has described the move by journalists at the Charlie Hebdo newspaper to publish another cartoon of the Prophet Muhammad on its cover this week as “dangerous” and warned that they should expect a “backlash”.

Abbot Hederman was speaking to the Limerick Leader about the terrorist attacks in Paris last week, which claimed 17 innocent lives, including some of the France’s most famous cartoonists at the satirical weekly newspaper.

The cover of the most recent Charlie Hebdo publication, published this Wednesday, with a run of up to five million copies, features a tearful Muhammad, holding a ‘Je Suis Charlie’ sign, with a tagline that says ‘Tout est pardonne’ or ‘All is forgiven.’

“France love their freedom more than anything else and they are inclined to go over the top in every direction. It’s very insensitive at this time to be producing all these cartoons,” said Abbot Hederman.

“I know that for the French, liberté and égalité is their flag, but this time it seems to me to be imprudent.” However, no image, action, or religion of any kind, he said, “should permit the violence which has happened there.

“It’s always a small group of people who use religion for their own purposes that perpetrate violence - it’s nothing to do with the actual religion and to condemn the Muslims for this is wrong. Their religion is so old and so refined and so close our own really.”

While he said the publication “doesn’t spare anybody” when it comes to satire, “the weight seems to be somehow towards Arab countries and Muslims.

“It’s not a very appropriate moment to be having cartoons. Again, nothing can excuse what happened in their offices. They are now coming back in an exaggerated fashion to say ‘we are not going to be bullied or put down by anybody’.”

“We are now into a warfare between the people who believe everything should be allowed under freedom of speech and expression and then the others who are saying if you publish anything against us, you are going to be shot. It’s like two people backed into two corners and both coming out with all guns blazing - the battle of the OK Corral.”

Limerick’s growing French community are still reeling following the horrific attacks in Paris last week, and over 100 people have signed a book of condolences at the Alliance Francaise in Limerick, which is the second oldest French society in the country. However, many are not surprised by the decision to put the Prophet Muhammad on the newspaper’s front page again.

“That is typically French - we will never back down. I couldn’t imagine a French newspaper not doing that, they are re-affiirming their principles,” said Kevin Saude, a French national and a mature student of politics in the University of Limerick. “I have been away from France for the past seven years but when I went back before Christmas for five weeks I found a very fragmented country. The climate is very tense now, very suspicious.”

A spokesperson for the alliance thanked those who have already signed the book of condolences, as well as bringing flowers and lighting candles. The book will remain open until this Friday, January 16 in No. 7 Pery Square from 9.30am to 1pm.

Dr Loïc Guyon, head of the department of French studies at Mary Immaculate College, said following the unprecedented numbers who marched in Paris and in cities across France in support of freedom of speech, he believes the terrorists have failed - despite the loss of life.

“They created surprise and pain and anger, but beyond that, they won’t silence anybody. On the contrary, they have triggered a huge reaction of support for Charlie Hebdo, which wasn’t the best read weekly newspaper in France before this.”