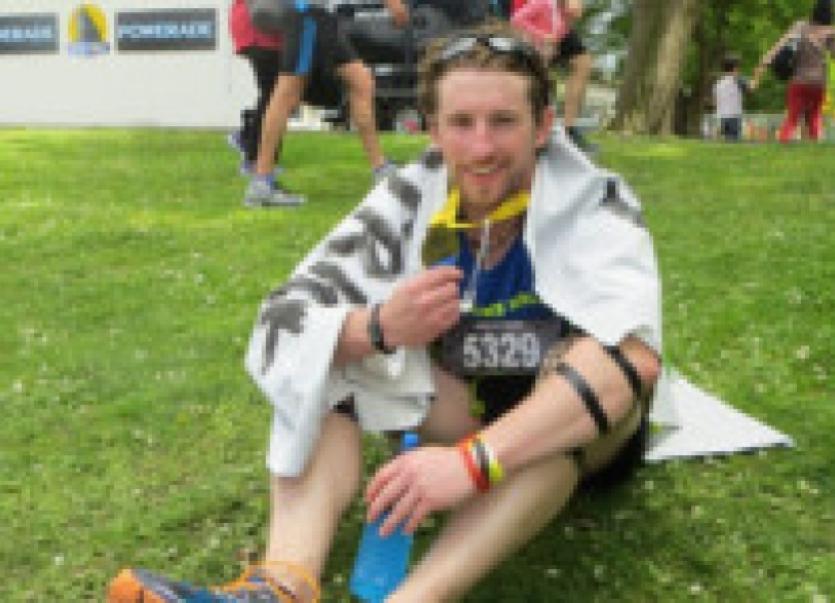 LIMERICK city man Patrick Gibbs said he had 11,000 reasons to keep putting one foot in front of the other in the Auckland marathon at the weekend.

LIMERICK city man Patrick Gibbs said he had 11,000 reasons to keep putting one foot in front of the other in the Auckland marathon at the weekend.

But it was in honour of two women close to his heart that really propelled him over the finish line in New Zealand in a time of just over five hours.

Told he would never play sports again after a car crash, in which his girlfriend died, he ran the marathon in her memory, and to reclaim something of his former life before the devastating crash.

In the meantime, he has also now raised over $11,000 - or over €7,000 - for a charity that would have been close to his late girlfriend’s heart, and donations are still continuing to come in.

His sister Paula, 30, a qualified barrister who has also moved to live in New Zealand, ran it with her brother.

“Running the last 12k with no music was so hard, you really needed the distraction when your body is screaming at you in pain but I had over 11,000 reasons [referring to the value of donations] to keep putting one foot in front of the other. Thanks so much to everyone for the support,” he said.

On November 14, 2011, 300 miles north of Perth, Patrick, from Ballinacurra, and his girlfriend Kelly Meehan, 31, from Newmarket-on-Fergus, county Clare, were travelling the nine-hour journey home along the Great Northern Highway, when they collided with another vehicle.

The couple had moved to Carnarvon, a coastal town in Western Australia in 2008 to escape the recession. “I had a great job as an engineer in Australia, that was looking up and up, and I had the girl of my dreams right at my side. Life just seemed to have finally shined on us,” he recalled.

“Well that was the last thought that went through my head, before a drunk driver collided head on into our car. Kelly was asleep at the time of the accident and never woke up. To say my life changed that day would be an understatement.”

Patrick, 29, who had represented Ireland in Australian-rules football in 2008 and grew up involved in hurling, lifesaving, and track and field, ran to support Child Cancer Foundation of New Zealand. His aunt Maire Enright, from county Limerick, is battling brain cancer after defeating breast cancer, and he also ran the marathon to show solidarity with her. To donate see teamccf.everydayhero.com/nz/patrick#post_392909