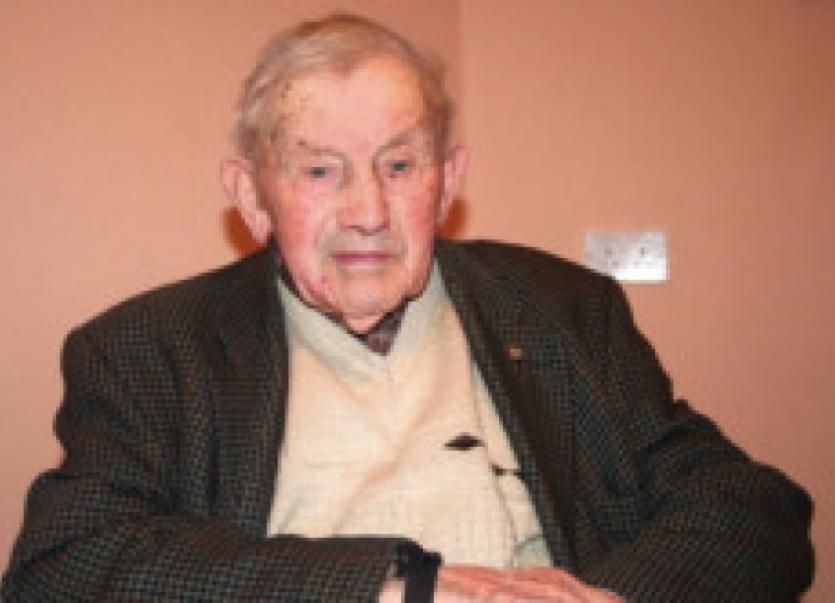 ONE of Limerick’s oldest citizens has died. John Lenihan, better known as Jackie, died peacefully at his son Liam’s home in Tournafulla last Friday, October 31. He was 103.

ONE of Limerick’s oldest citizens has died. John Lenihan, better known as Jackie, died peacefully at his son Liam’s home in Tournafulla last Friday, October 31. He was 103.

Mr Lenihan had been ill for just a few days before his death and to the end, his remarkable memory and recall never faltered. With his passing has gone one of the remaining few who have straddled some of the defining moments of our history. John Lenihan was born into the British Empire but lived most of his life as a citizen of the Republic.

He was born on January 10, 1911 and grew up on the family farm in Caherlevoy, Mountcollins. As a young man, he took over the stewardship of the small farm and looked after his holding, his animals and his bog until he handed it on to the next generation in 1985.

John married Nellie Collins from Rockchapel in 1947 and they had four children, two sons and two daughters. But Nellie predeceased him, dying on Christmas Day, 1988 at the age of 74.

And although his formal education never took him beyond national school, John held a firm grip on learning right throughout his life. Up to his final years, he could still recite the poems he learnt at school, and could explain the Euclid formulas he was taught.

His favourite poem always was The Deserted Village and he regularly recited it or quoted from its wisdom. One particular phrase was a favourite: “Where wealth accumulates, men decay.”

A pioneer all his long life, he was also a great support of St Joseph’s Young Priests Society and was a regular Massgoer.

And his powerful memory meant he could recall, even years after, the first sermons of priests coming into the parish, or homilies given by missionary priests or on his own, frequent pilgrimages to Knock.

His head for dates also meant he was a great source and resource for local families and returning emigrants who wanted to trace relatives. His knowledge extended back to his grandfather’s generation, and his stories reached back beyond the Famine.

He could remember the War of Independence but chose not to speak of the Civil War.

Earlier this year, he was the focus of much attention at the Lenihan Gathering where his peerless knowledge of the family tree came into its own. It was a gathering which warmed his heart.

As a young man, he was active in the GAA, and captained Mountcollins to the County Junior Football Championship title in 1939.

He remained an active man all his life. After his retirement from farming in 1985, he and his wife Nellie came to live with their son Liam and his wife Lil in Tournafulla.

There, he took on the job of making a garden, growing potatoes, onions, cabbages and rhubarb until he was 97. Even after, he kept an eagle eye on what was happening in the garden.

A man blessed with extraordinary good health throughout his long life, John Lenihan was unwell for just a few days before his death, among his own, last Friday morning.

He was waked at home on Friday night and his remains brought to the Church of the Assumption, Mountcollins on Saturday evening.

His friend, Fr Tom Carroll, now PP of Parteen but who spent several years in Mountcollins, gave the homily. He was buried afterwards with his wife in the adjoining cemetery.