The late Mary Harty is laid to rest 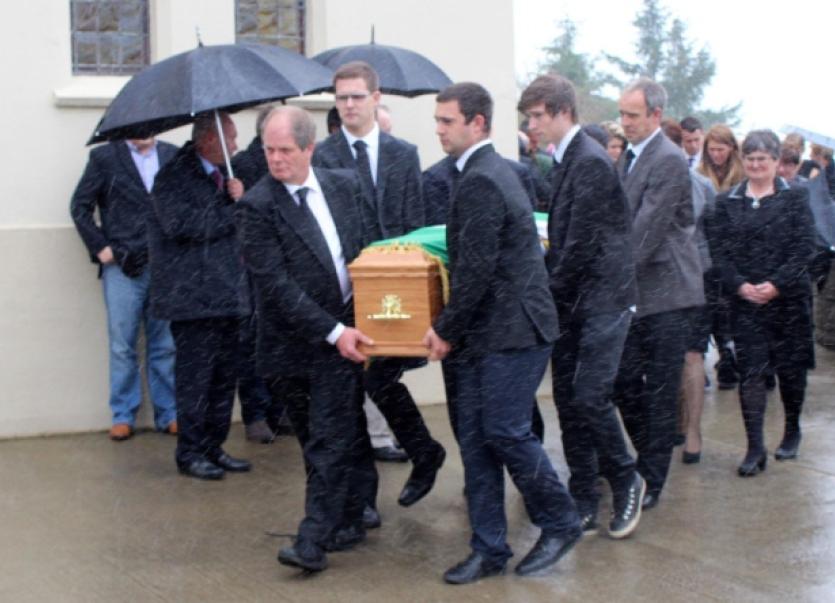 Hundred of mourners filled the church. There were representatives from the worlds of politics, education and every facet of community life - of which Mary was a pillar.

Taoiseach Enda Kenny’s aide-de-camp Commandant Kieran Carey; Mary’s good friend Minister for Finance, Michael Noonan and many TDs and councillors were present to pay their respects. A special meeting of Limerick City and County Council took place in Pallasgreen Community Centre before the funeral to pass a vote of sympathy on the death of the former cathaoirleach.

Chief celebrant, Fr Pat Burns, parish priest of Pallasgreen/Templebraden, said they joined together to pray for Mary and celebrate her life.

“God has called her to her eternal happiness and we pray with Eamonn, Siobhan, Carmel, nieces, nephews and extended family. We pray that God will bless that empty space,” said Fr Burns.

He described Mary as “kind, courageous, funny, loyal and loving”.

While motor neurone disease claimed Mary’s life after a two year battle, Fr Burns spoke of all her accomplishments in her 54 years. Only last week Mary organised an ice bucket challenge at her own home. That was the mark of the lady.

The gifts brought to the altar reflected her contribution to life in her parish, county and further afield. A piece of bog oak was a present from the parents association of Nicker National School on her retirement after 30 years of service and a certificate of appreciation from Limerick County Council.

“The bog oak represented a 30 year contribution to education in the parish and how many lives she touched,” said Fr Burns. Children from Nicker National School were part of the choir that sang beautifully throughout the Mass.

Despite the debilitating illness Mary continued to represent her constituents until this year’s local elections.

“She lived each day to the full despite her disease,” said Fr Burns, who recalled the sponsored walk, coffee mornings, council and school meetings she attended and weddings. Many of those wedding invites were from her past pupils.

After the funeral Mass ended dozens upon dozens of men, women and children continued to file up the aisle to shake hands with the Harty family and offer words of comfort.

As the rain came down, the coffin - carried by her family and draped in the Limerick flag - was removed to Old Pallas cemetery for burial. May she rest in peace.