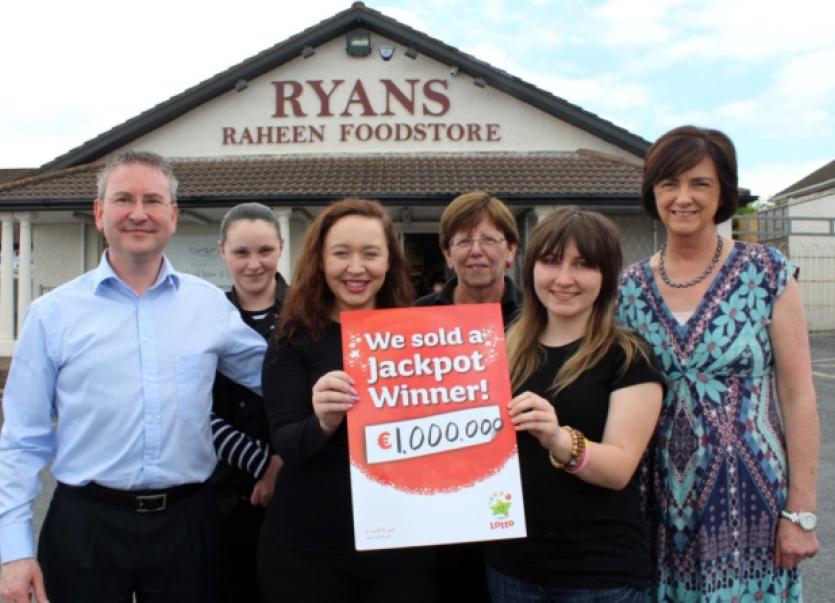 MYSTERY and excitement surrounds the identity of the latest Limerick Lotto millionaire.

MYSTERY and excitement surrounds the identity of the latest Limerick Lotto millionaire.

One lucky person - or indeed syndicate - is celebrating this week after a €4 Quick Pick ticket shared half of a whopping €2m jackpot in Saturday’s draw.

The winning ticket was sold last Friday in Ryan’s Raheen Foodstores, a family owned shop that has been a Lotto agent since the draw began in 1988.

Owner Ray Ryan said that he hoped the windfall would benefit someone in the locality.

“For a customer, somebody has just had their life changed, which is a great bit of news,” he said.

“There is great excitement, the staff are absolutely delighted and all the customers are coming in and asking if we have any idea who it is and if we have any clues.

“We have no idea but it is absolutely great,” he added.

The shop has been in the Ryan family since it was built in 1987, and Ray is the second generation to man the tills, joined now by his daughter Kealin.

He said the €1m win was “a life changing amount of money, and in a good way”.

“It is not too much to go completely barmy. It is an ideal amount, a nice round figure,” he said.

“We have had some winners in the past but never a jackpot winner of this size, so it is great.

“We have a few five and ten thousands, but never anything of this size.

“It is absolutely great. Most of our customers are sort of regular, repeat loyal customers, so it would be nice to think that it is somebody like that.”

The staff in the shop genuinely have no idea who won, and a spokesperson for the National Lottery said the prize had not yet been claimed.

“Genuinely we have no idea. We know it was a €4 Quick Pick sold on Friday, but we don’t know what time or who it was,” said Ray.

“The fun is nearly in the mystery, it is part and parcel of the fun. It is amazing the goodwill of people, because nearly every person coming in has a smile on their face. To see that goodwill is incredible.”