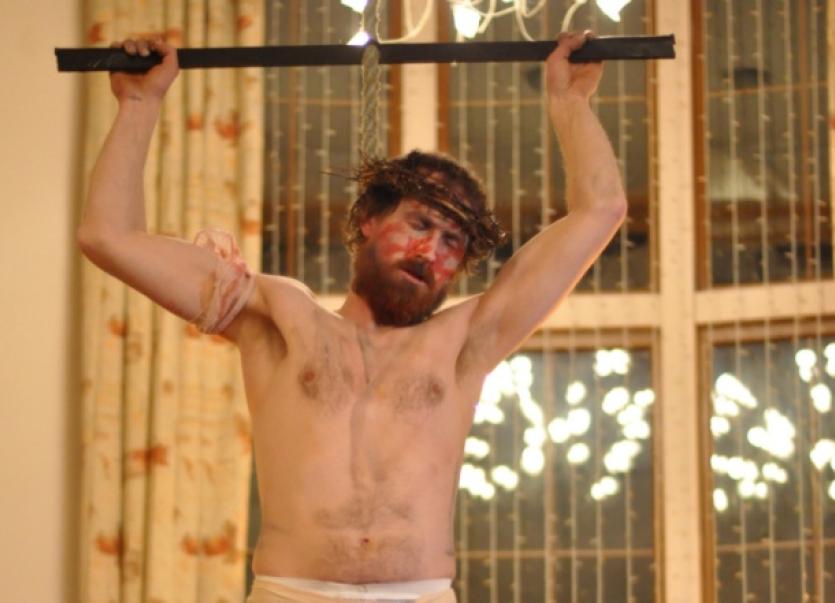 GARRY Fraher, who will portray Jesus in Passion 2014, is ready to be beaten, flogged and put up on a cross.

GARRY Fraher, who will portray Jesus in Passion 2014, is ready to be beaten, flogged and put up on a cross.

All eyes will be on Garry during the reenactment which begins in Nicker, Pallasgreen after 8pm on Holy Thursday and concludes on Friday afternoon with the crucifixion.

“There will be physical pain but it won’t be horrific pain. The production team have taken every aspect into account. The have spent hours thinking, assessing and trying to make things as safe as possible but to keep it as real as possible,” said Garry. After months of preparation by the cast and crew and decades of thought by producer and director Eamonn Harty, they are ready for Passion 2014.

On Holy Thursday and Good Friday, April 17 and 18, Nicker will be the location for the greatest story ever told.

From the agony at Gethsemane to the crucifixion it will be depicted in real time and in an interactive way. Garry, who has acted in local plays, says Eamonn stopped him outside a local shop shortly after Christmas in 2012.

“He said, ‘We are going to do it’ and to start researching,” recalled Garry. Currently he is reading The Dolorous Passion of Our Lord Jesus Christ which inspired Mel Gibson for his film role. But unlike the Hollywood actor, he can’t devote all his time and energy to Passion 2014. He owns G&D Tyres in Pallasgreen and he and his wife Dara, also involved, have four children including twins under ten. Yet there were rehearsals on seven nights last week.

“When you are doing something you enjoy doing you will always make the time to do it. None of us have done anything to this scale before, this is way past our expectations.

While all the attention will be focused on the cast, he is quick to praise those behind the scenes. A group of around 40 have been working since last November producing costumes, props, photographs, sound, lighting and promotions.

“The production is crazy, so many are giving so much time, they don’t get enough credit. I got home at 2am one night and the production team were still having a meeting. Everyone is so invested in it and it is down to Eamonn - it is his enthusiasm,” said Garry. All eyes will be on him but he is not nervous.

“I just get more determined. I am going to take the heart out of your chest and I am going to give it back to you in two pieces. That’s my aim - for the crowds to feel every breath. I am not worried about words or sounds or pronunciation, it is pure emotion,” he said.

Garry is very conscious of their responsibility.

“After the night in Ballykisteen [an excerpt was performed] a nun came up to me. You do get worried when you meet nuns and priests because they have given their whole life to religion. You have to be respectful. She said, ‘I didn’t enjoy that but I lived every breath you took’.

“That’s the best compliment I have got. I want people to invest in it and come on the journey. I don’t want to hear ‘lovely show, great stuff’.

“We are giving them the whole story from start to finish. We are not forcing our opinion on anyone, we are not saying this actually happened this way, this is our take on it. It is just such a serious issue and such a big thing that you can’t be messing with people’s beliefs,” said Garry, who wished to say a special thank you to his wife Dara for her support and help through the emotional highs and lows. Garry and all involved want as huge crowd in Nicker.

An approximate timeline of events are: Holy Thursday, 9pm - Garden of Gethsemane; 11pm - trial in the church; 1am - taken to the cell; 1.30am - 3.30am – 100 voices choir and all night vigil. People are welcome to visit the grotto, have a quiet moment or say prayers during the night.

Kelly Travel have return buses from Limerick city. See kellytravel.ie or contact 061 384422. Car parking will be provided in the vicinity of Nicker.