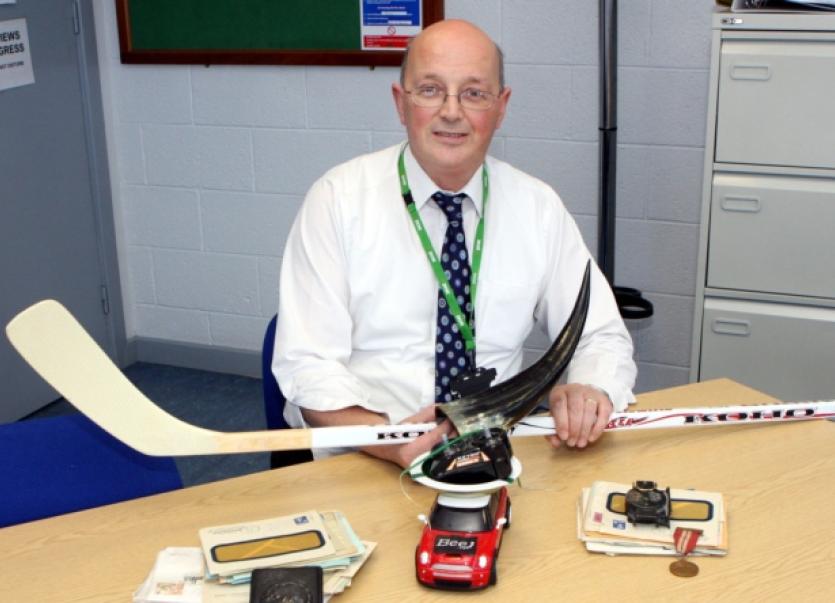 OVER 50,000 items of lost post destined for people all over Ireland end up in An Post’s returned letters centre in Limerick each week, where the arduous task begins to track down the sender.

OVER 50,000 items of lost post destined for people all over Ireland end up in An Post’s returned letters centre in Limerick each week, where the arduous task begins to track down the sender.

And over the Christmas period the number of items received by the 19 staff - Limerick’s ‘postal detectives’ in the Docklands business park on the Dock Road - doubles.

Here, staff will never grow tired at marvelling at the weird and wonderful items which land on their desks - or at how people can get an address so incongruously wrong.

Adrian Gordon, the operations manager at the centre, opens the door to the storeroom, where lost letters and goods are kept for a minimum of three months from their receipt in the centre.

There is an ice hockey puck, a ringmaster’s whip, wedding veils, a cow’s horn, a cigarette case and compass from the Nazi era, and dozens of books which failed to make it to their rightful new owners at Christmas.

But he is at pains to emphasise, it doesn’t have to be this way – if only people wrote their address on the top left hand corner of the item, it could be returned to them straight away, rather than lying in postal purgatory.

The bulk of the 50,000 items delivered to them each week are letters, along with 300 to 400 parcels, containing Christmas presents, birthday presents or gifts for a Communion or Confirmation. In a fortnight’s time, there will be plenty of red envelopes which fail to make it to that special someone on Valentine’s day.

Though it is not encouraged to send cash through the post, thousands of euro a year is found in undeliverable mail, and is lodged in an An Post bank account for perpetuity. The vast majority of money found is in Euro, but smaller amounts are in Canadian, American and Australian dollars, reflecting emigration patterns.

This week alone, eight bags of new clothing were ready to be sent to the Irish Charity Shops Association, who will distribute them to a charity of their choice.

Many other items - foodstuffs, electric items - are destroyed or recycled when their owners fail to come forward.

When people post items with an incorrect or incomplete address, and fail to write their return address, An Post’s staff are forced to open the items in a third bid to find the sender or intended recipient.

The contents of the items are logged in their database, and all they can do is wait for people to come forward to piece together the final piece of this postal puzzle.

“Opening letters is not something An Post does normally. We pride ourselves on our business of being a trusted intermediary. You trust us to deliver it unopened, and we trade on trust. In cases like this we have to open the envelopes,” he says.

“We are the only people authorised to do this and it’s done under very controlled conditions. For anyone else it’s a sackable offence.”

“Putting down the return address is actually a win-win situation because we don’t have to open the letter and you get your letter back,” explained Mr Gordon.

There are dozens of books, from Maeve Binchy’s Meave’s Times to How to Make Your Man Behave in 21 days, dvds of Downton Abbey, and items as diverse and wide-ranging as wedding pictures, a Kodak camera, tyre repair kits, dog clippers, Lancome make-up, jewellery from River Island, an LG computer tablet, water filters, lottery tickets, a green satchel handbag...and on it goes.

There are a box full of car and house keys, prompting him to urge people to use sealed or padded envelopes for loose items.

With some 1.7 million weekly customers, it is not surprising that a small portion of items goes missing. “Christmas paper is lovely but it’s not robust,” he says, pointing to one tattered item which failed to make it under the Christmas tree.