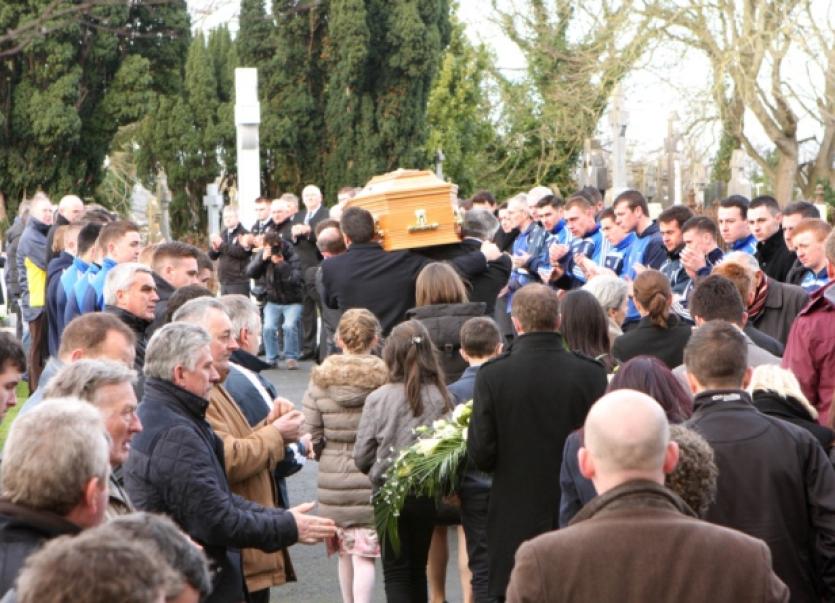 The “referee’s whistle that he blew with authority and the cards that he hated giving out” were among the gifts offered at the funeral of Shane Hourigan in St Mary’s church, Rathkeale this Wednesday.

The “referee’s whistle that he blew with authority and the cards that he hated giving out” were among the gifts offered at the funeral of Shane Hourigan in St Mary’s church, Rathkeale this Wednesday.

The church was full to overflowing with mourners, many wearing the blue and white of Shane’s beloved St Mary’s Sean Finn’s club.

The GAA fraternity turned out in force to bid farewell to the 44-year-old father-of-one who died following a road accident on Monday morning. Among those attending were GAA president Liam O’Neill, Oliver Mann, chairman of the Limerick county board and other members of the county board and the Munster council.

Speaking at the funeral, Mr Mann said it was “the hardest, the saddest, the most tragic” day for him since he had become county chairman.

“I was proud to call Shane a friend. He was a friend of Limerick GAA, a friend to his colleagues in refereeing circles and the most important of all as a son, husband and father.”

He added that it was a “great source of pride” for everyone involved in Limerick GAA to see Shane’s progress as a referee where he represented Limerick at provincial and national level and was “rightly seen as one of the rising stars of the national referees panel”.

“Shane did his business on the pitch as he did it off it - with quiet efficiency and above all with respect for others. The words on his referees jersey, Give Respect Get Respect, were never more appropriately applied. He had the gift of being able to communicate with players, to explain his decisions in a courteous manner and to walk away on good terms when the final whistle was blown.”

He thanked Shane for all he had done for Limerick GAA. “As one final whistle blows here on Earth, you can be sure he’s getting ready for the throw-in in heaven,” Mr Mann concluded.

In his homily Fr Willie Russell described the “stunned silence” that had descended on Rathkeale as the news of Shane’s tragic death emerged on Monday morning and he thanked the fire brigade, the gardai and the paramedics who had attended the scene of the accident at Reen’s Pike.

“To use the words Rest in Peace for Shane is almost a paradox, he had such a busy life,” said Fr Russell.

“Nationwide, his death is just another statistic but for Rathkeale, for West Limerick, Limerick city and county and even further afield, Shane’s memory will live on,” he added.

He recalled the celebration last Saturday night to mark “Rathkeale’s greatest year in GAA terms” which included St Mary’s Sean Finn’s winning the U21 county football championship. The guest of honour on the night was Kerry footballing legend Darragh O Sé but, as Fr Russell pointed out, “even Darragh O Sé must have felt a little bit uneasy with the rising tide of youngsters north of the kingdom.

“And as Shane sat proudly in the top right corner of the Rathkeale House Hotel...he must have been proud of those youngsters whom he moulded and shaped as children and were ready to replace the Darragh O Sés of tomorrow,” said Fr Russell.

Speaking on behalf of the family, Shane’s first cousin William Cusack, paid tribute to his local club, the GAA and all who came to support the family in the days following his death. To a round of applause, he concluded: “The man inside in the box, that box wouldn’t hold his heart, it was so big”