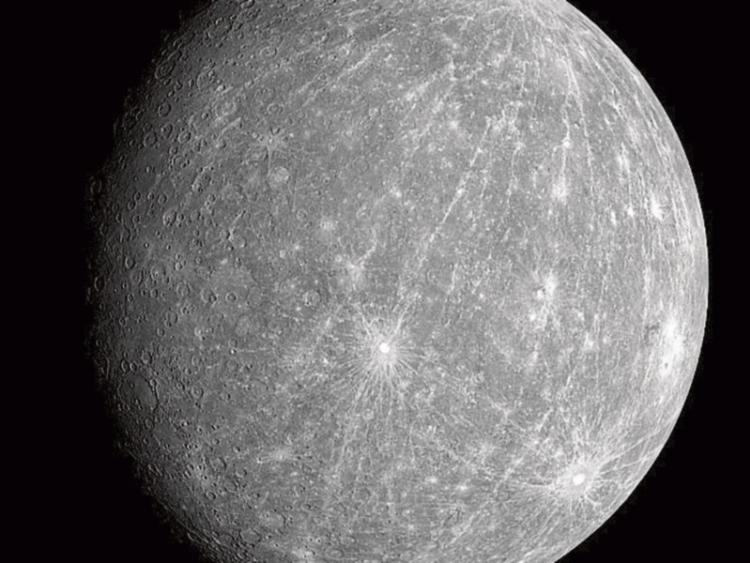 As highlighted a couple of weeks ago, towards the end of May (21st and 22nd) it will be possible to view the planet Mercury shortly after the Sun sets. The fastest planet in our solar system, Mercury takes its name from the Roman god known for his fleet footed nature. So how fast is Mercury?

Although Mercury is the closest planet to the Sun, it is not the hottest planet in our solar system, Venus takes that accolade. This is because Mercury lacks a substantial atmosphere to trap in the solar heat. The lack of atmosphere is due to Mercury’s low mass and proximity to the Sun. The small size of Mercury (slightly larger than the size of our moon) means its gravitational pull is insufficient to hold onto an atmosphere whilst its closeness to the Sun means that the planet is periodically bombarded by solar winds destroying any potential atmosphere that is formed.

Much of the information on the planets in our Solar System comes from space probes and in 1973 the American space probe Mariner 10 was launched on a mission to Mercury. During the three planned flybys of Mercury, Mariner 10 was able to map nearly half of the planet’s surface by taking over 2700 images.

It was revealed that the surface of Mercury is very similar to that of our moon displaying many craters that were formed early in the formation of the Solar System. Bright streaks radiating outwards from some craters were also visible. These crater rays highlight the energy that was released by some of these impacts as material was ejected far from the crater before falling back to the surface in this distinctive pattern.

The same pattern can be seen on our own moon. Next time there is a full moon, look towards the south and you will see a large crater known as Tycho displaying the same bright streaks as those seen on Mercury.