Limerick gets ahead on its age-friendly agenda 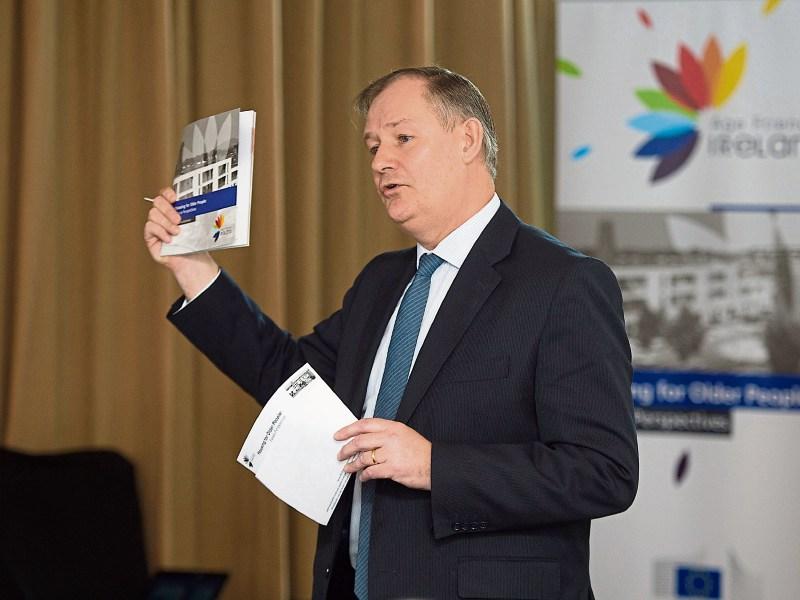 Speaking during the launch of a study last year by Age Friendly Ireland on ‘Housing for Older People: Future Perspectives’ was Conn Murray, Council CEO

LAST week I found myself in an interesting discussion about ageing. Not because I am concerned about the odd grey hair but for a more important reason.

You see, Limerick is Ireland’s fastest ageing city. This fact fascinated me yet I found the concept slightly disconcerting.

‘Here we are talking about pedestrianisation in the city centre’, I thought. ‘Maybe we should be focussing more on chairlifts and loudspeakers on street corners instead’.

My reaction is exactly what those working in areas focused on our ageing population would expect.

In many ways I was immediately associating the word ‘ageing’ with concepts such as decrepitude, incontinence and death.

The fact is I was ageist in my reaction to the fact  Limerick is getting old, and fast.

This represents an increase of nearly 100,000 people in that  age group in just five years. In contrast, it took 30 years, between 1970 and 2000, for the population of over-65s to increase by the same amount.

Therefore, if you were lucky you worked all your life, got a few months’ respite and then passed away.

In more recent times things have changed slightly. In 2012 the state pension was provided at age 66 with men now expected to live to be 78.4 and women having a life expectancy of 82.8.

We have seen a two-and-a-half-year increase in life expectancy over the  last decade and this trend is set to continue, obviously resulting in a much longer life-span post-retirement.

In fact, many of our younger population can actually now expect to hit the 100 mark in their lifetime.

What I am delighted to see is the fact that we here in Limerick are already preparing for the fact that our population is ageing. In 2015, Limerick City and County Council launched its Age Friendly Limerick Strategy 2015-2020.

Limerick’s ambition means it will become a great place to grow older. The city will provide easier accessibility to public buildings, shops and services. Older people’s views will be taken into account when it comes to key decisions being made about Limerick.

In relation to the retirement concept and particularly those who may now choose early retirement it is also very interesting to note that Limerick has recently become home to ISAX or the Irish Smart Ageing Exchange.

This group is a new independent network which delivers a ‘joined up approach’ to fast-tracking the R&D and commercialisation of solutions for the global smart ageing economy – an economy projected by Merrill Lynch to be worth $15tn by 2020.

Limerick is firmly focused on a plan to deliver a positive future for our city. The 2030 Economic and Spatial Plan aims to create a new Limerick, and one that is a leading city across numerous disciplines.

It is clear that we are already ahead of the game when it comes to treating our ageing population as an important and valuable part the city’s demography.

The 2017 Limerick Literary Festival in honour of Kate O’Brien celebrates its 33rd year. The event continues to honour the life and works of the Limerick author, while attracting prominent participants from all over the world.

This year the festival has gathered up to 20 participants from Ireland, England, Italy and the US in six different venues in Limerick city.

The Festival will officially be opened on Friday February 24 at 6pm in Limerick City Gallery of Art in Pery Square by journalist Olivia O’Leary.

Events throughout the festival will include illustrated talks on Oscar Wilde and Morrissey by author Eoin Devereux.

The Lime Tree Theatre, renowned musician Bill Whelan and broadcaster Liz Nolan will reveal their choice of books in Desert Island slot, including “the book I would never lend”. And finally, popular author Cecilia Ahern will be in conversation with fellow novelist Donal Ryan.

The event runs across the city from February 23 until February 26.

Congratulations to Ballyhoura Country tourism trade and members of Ballyhoura Failte who have been nominated for a number of National Awards.