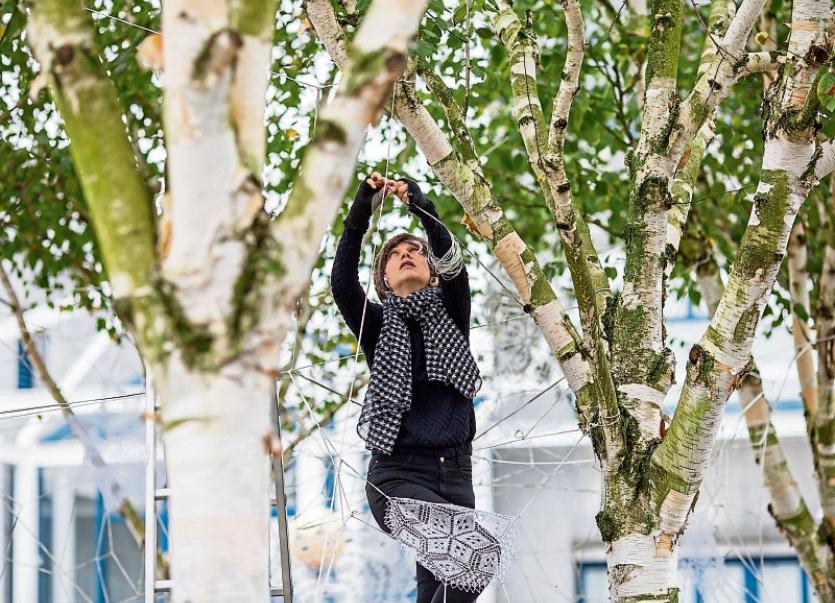 OVER recent years the focus on Limerick’s cultural offering has enabled us to re-imagine traditional aspects of our cultural history whilst also discovering the value of bringing culture and artistic elements to the streets of our city.

Anyone who has visited the area around the Potato Market in Limerick recently will have noticed an unusual intricate piece of public art.

From a distance it looks somewhat like a giant spider’s web weaved through branches of trees in Brian Boru square on Merchants Quay. On closer inspection it is clear this installation is clever nod to the form of delicate lace for which Limerick is synonymous.

The work is by a street artist called NeSpoon, a Warsaw based street artist who uses lace patterns to create delicate and visually unique artwork on public spaces. All of her work is inspired by the fabric of lace.

Most of us would consider street art to be of the sort linked to the graffiti movement of the 1980’s. During our year as National City of Culture we saw examples popping up across the city, many of which have now become an accepted part of the urban fabric.

Just last year as part of the Sign Painters exhibition in the city we saw the unveiling of a large public installation using the title of the Cranberry’s first album ‘Everybody’s Doing it so Why Can’t We?’. The finished piece, crafted by skilled sign painters, has been on view on the side of Brown Thomas for over a year.

NeSpoon is interesting in the sense that she isn’t a street artist in the traditional sense. She describes her work as somewhere in between street art, pottery, painting, sculpture and jewellery. Her Limerick piece is part of an upcoming multi-site exhibition celebrating Limerick’s history of lacemaking and contemporary lace forms.

Hybrid: Limerick Lace Liminal Identity exhibition and conference taking place in Limerick later this month and is a partnership project between Limerick Museum and Archives and Limerick School of Art and Design.

There seems to be a renewed interest in the tradition of Limerick Lace over recent years. December 2014 saw the launch of Amazing Lace, a book written by Matthew Potter and edited by Jacqui Hayes, which focussed on Limerick’s lace tradition.

Potter, Hayes and the research team conducted extensive searches in newspapers, archives and online resources as well as speaking to people who still practice the craft or have family links to the Limerick Lace tradition.

The Limerick Lace industry was founded in 1829 when an Englishman Charles Walker established a factory at Mount Kennett Limerick and began training the first recruits. At its height the industry provided work for 1800 women. The Hybrid conference and exhibition will address the role of multiple influences in the creation of contemporary lace inspired work.

Conference speakers will include textile artists, lace makers, lace historians and curators. Experts from other great lace centres in Nottingham and Calais will address the heritage and future of lace and what it means to contemporary society.

The Hybrid conference and exhibition will run from  October 24 to November 4. Tickets  are available through the Lime Tree box office.

The commitment by ACI Worldwide a leading global provider of real-time electronic payment and banking solutions, to create 50 jobs initially as part of its development of a new European data centre is most welcome.

The company announced plans to locate in Limerick some time back. The opening of this state-of-the-art facility is yet another jobs boost and important FDI investment for the city.

As seen with the Collison brother’s success at Stripe, the world of online electronic payments is not only lucrative but fast developing into a market that has the potential to make cash payments null and void.

In partnership with IDA Ireland, ACI will add 50 new hires, on top of the current team of nearly 100. The company has had a presence in Limerick for ten years, cultivating strong talent as part of its long-standing internship program and collaboration with the University of Limerick.

ACI provides world-class electronic payments, banking, and fraud protection solutions and services to more than 4,600 financial institutions, retailers, and billers around the world through a private cloud, processing more than 35 million transactions per day.

The announcement comes on the back of a number of other similar job creation announcements seen in recent weeks. The confidence that such investments give to our city and county simply cannot be underestimated.

If the turnout last Saturday was anything to go by then Limerick’s future as a key film production centre is a bright one.

Saturday saw a public open day at Troy Studios where local film practitioners or those with an interest in the industry gathered to hear of what this fantastic new facility will bring to the region.

The day also saw the launch of Film in Limerick, a new online resource for the film and TV industry which promotes and showcases all Limerick and Mid West has to offer from a visual perspective.

Film in Limerick has been designed to complement the work of Troy Studios, essentially it is a one-stop shop containing information on film locations, professionals, accommodation and all other local information needed for production companies. It also catalogues many of the diverse productions which have been filmed in Limerick.