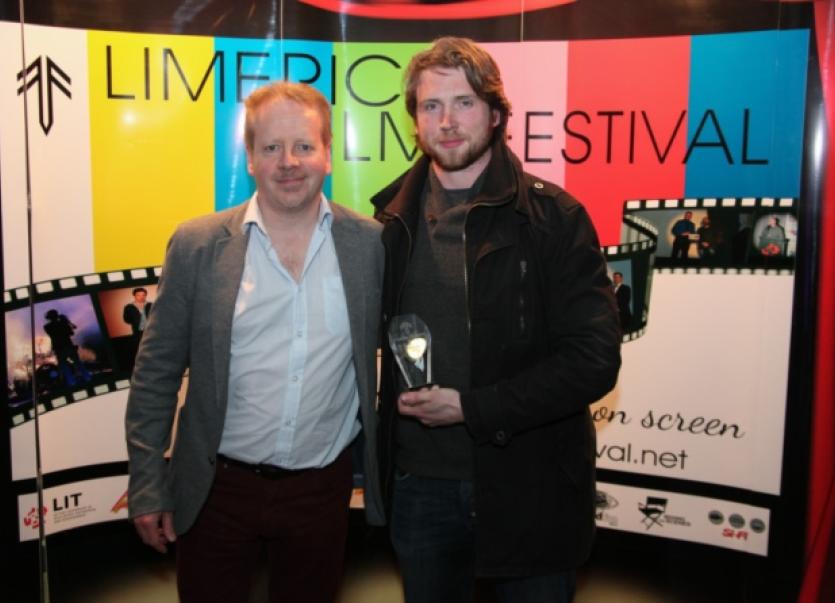 A FILM made in Limerick on Sean South’s crusade against Hollywood has taken one of the major categories at the Short Film Awards as part of the Limerick Film Festival.

A FILM made in Limerick on Sean South’s crusade against Hollywood has taken one of the major categories at the Short Film Awards as part of the Limerick Film Festival.

Having established itself as part of the Irish film festival circuit and now in its sixth year, the festival ran over three days at the LIT Millennium Theatre, culminating in the Short Film Awards Show on Saturday night.

With over 30 films shortlisted from home and abroad, competition was fierce but best actor went to Thomondgate’s own Pius McGrath for his portrayal of Sean South in writer/director Tommy Conlon’s 18-minute film Play It Again Son!

“We were up against a film called An Cat for which Frank Kelly, of Fr Ted fame, was nominated and Sineater, for which Joe Mullins, the lead in Pilgrim Hill, was nominated. So I was in good company in terms of the nominations. It was very unexpected but I was delighted to get the nod,” said Pius.

The short is based on letters Sean South - whose violent death during an IRA raid in 1957 is commemorated by republicans in the city every year - wrote to the Limerick Leader in the 1940s and in which he takes the “Judeo-Masonic controlled conspiracy” in Hollywood to task for corrupting the minds of young cinema-goers.

“The film is a fictitious interpretation of these letters that Sean had written. The approach is that while you are playing somebody who is a real-life character, at the same time this is a circumstance that is entirely created and based on the detail that was in the letters. You are trying to be true to the writing of the script and that is all you have to go with,” said Pius.

Mr Conlon admitted to having been shocked when the film’s name was announced at the awards.

“We had no idea beforehand who the winners were going to be but I was pretty sure it wasn’t going to be us because the competition was so fierce.

But I’m delighted that a film which was made in Limerick, using Limerick

actors and Limerick locations, received this award at its home festival,” he said.

“I’m particularly pleased for Pius McGrath because of the exceptional commitment he brought to the role, long before the first day of filming began. I think he brought a lot of skill and sensitivity to the part and I’m just happy that his work has been recognised. Pius was part of a brilliant ensemble cast who gave their time and talent so generously to the film. I’d like to thank Myles Breen, Joanne Ryan, James Deegan and the brilliant Jim Queally for their inspired contributions. And a big shout-out also to all the crew and everyone else who helped turn words on a page into images on a screen.”

Also among the award winners at the show was Oscar-nominated animation company Brown Bag Films for their short film Anya, proceeds from which will support orphaned and abandoned children in Russia.

The festival has gone from strength to strength since being supported as one of the Made in Limerick projects as part of Limerick City of Culture 2014.

Screenings, talks and workshops were well attended over the three days. Highlights included talks from film composer Patrick Cassidy and Brendan McCarthy, co-author of the Mad Max: Fury Road. Six minutes of this blockbuster, starring Tom Hardy, were screened in Limerick in a world exclusive.

And feedback from people like Brown Bag had been enormously encouraging, he added.

“They have done all the Irish film circuit and said they would highly rate ours as a contender.”