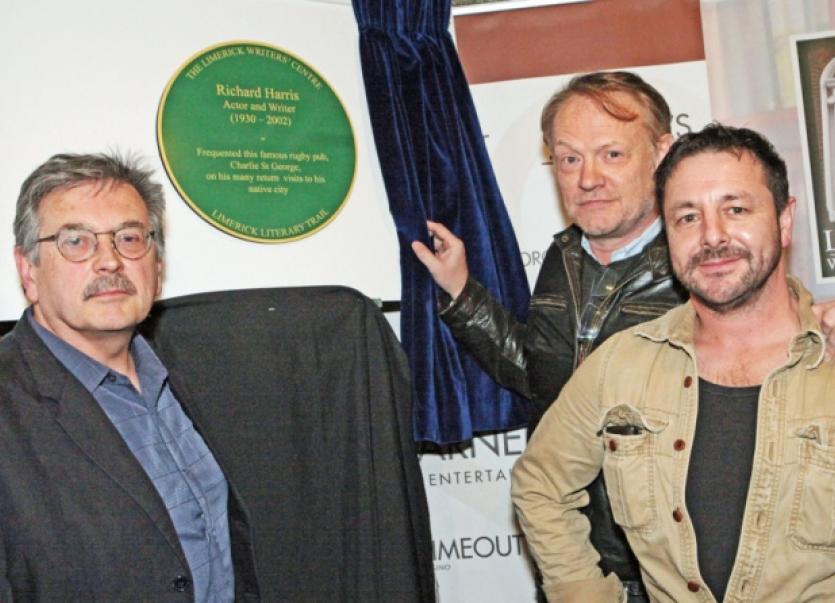 JUST forty minutes after his flight touched down in Shannon, actor Jared Harris was cradling a glass of whiskey in the cup of his hand in Charlie St George’s in Limerick city, and was nearly overcome with emotion as he read his father’s poetry.

JUST forty minutes after his flight touched down in Shannon, actor Jared Harris was cradling a glass of whiskey in the cup of his hand in Charlie St George’s in Limerick city, and was nearly overcome with emotion as he read his father’s poetry.

Here, in the Parnell Street pub, once described as Richard Harris’ ‘second home’, he unveiled a plaque in his father’s memory, which will soon be erected outside the bar.

Jared flew in on Thursday last, just in time for the third annual Richard Harris international film festival, which continues to grow.

This year, the Limerick Writers’ Centre joined its cause and planned a plaque to Harris, who was also a prolific writer of poetry in addition to being a legendary actor, as part of its Limerick literary trail.

“I think my father would be absolutely delighted to be a part of this festival and the association with the literary walk,” said Jared, one of the stars of Mad Men, to a packed house.

“Literature was very important to my dad. Quite often in the Bahamas, he would disappear for a couple of days, and just take a pile of books up to bed. He was a very generous person but never spent money on himself really.

“The only two things he spent money on were a Queen Anne piss-pot, and first editions of Beckett, Joyce, and Yeats and Oscar Wilde, and those he treasured.

“So this is near and dear to his heart. He’s smiling right now, and bless you for that,” he said.

Regaling the audience with entertaining stories of his hell-raising father’s antics - including being photographed in a fountain in Rome with a couple of ladies the night before he was due to meet the Pope at the Vatican - Jared also revealed a more sensitive, private side to his beloved father.

“He had tons and tons of poems, there’s got to be easily 150, that’s the ones you can actually read because he had a doctor’s handwriting, they’re impossible to decipher,” he said.

He also read a letter his dad wrote to a producer about a part offered in the film The Imposter of Baker Street.

“I would be grateful if you could let Michael Caine know how grateful I am that he thought of me. I’m not sure why anyone would want to play the part of Moriarty,” he wrote.