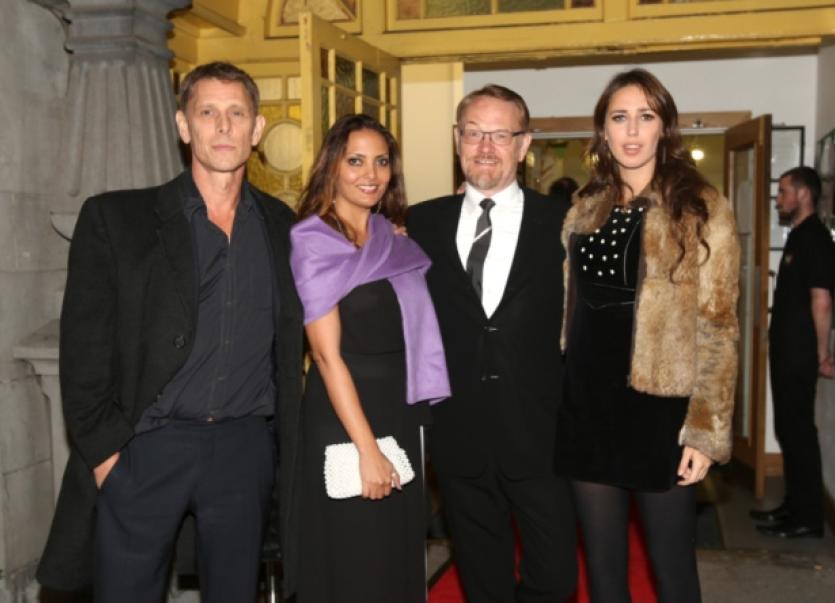 IN his native city, there is a statue – not universally admired – which captures Richard Harris in character in Camelot. In his adopted home of Kilkee, there is also a stirring likeness of him in full flow as a young man playing racquets on the beach.

IN his native city, there is a statue – not universally admired – which captures Richard Harris in character in Camelot. In his adopted home of Kilkee, there is also a stirring likeness of him in full flow as a young man playing racquets on the beach.

Both are intended to serve as timeless memorials to Harris, one of the great actors of his – or any – generation. Yet a city film festival created in the late actor’s memory, offers the potential to further enshrine the Harris legacy and inspire a new generation of film makers to take up the baton.

The inaugural Richard Harris International Film Festival took place in October 2013, 11 years after his death. The idea emerged from a think tank for The Gathering, hence the emphasis on the Irish film-making diaspora abroad, which forms part of the competition element of the event.

There was a significant buy-in from the family – understandably protective of the legacy – from the outset, particularly from movie star in his own right Jared, one of Richard’s three sons. All have attended the festival.

Jared now sits on the board of directors running the festival, along with Richard’s nephew Hayman, who lives in Rhebogue and has also been a regular attendee. A five-year deal signed with the Richard Harris estate has put the festival on a firm footing, while it is one of the few Irish events to boast a link-up with the movie Mecca of California in the Newport Beach Film Festival.

The festival has also been broadened to four days this year.

Zeb Moore, one of the key movers in keeping the largely voluntary festival going for a third successive year, says it has the potential to become a five day festival with events held year round - and the new creative team is thinking in such terms as it looks to this year and beyond.

“The significant change is that Jared is now on the board and it just proves to us the confidence the Harris estate have in the festival now, seeing it progress over the previous two years,” he says.

“We have now got a new creative team in the mix here as well, so we are more open to diversifying and bringing in a new audience - such as the introduction of a monologue competition for actors and a portrait competition as well, so encompassing other art forms, especially music and theatre. We are trying to make it as broad as we possibly can and have something for everyone in the audience, so to speak.

“We need to look at a five year term, which is why we have agreed with the estate for an additional five years, to bring the festival up to 2020 and Limerick’s bid for EU capital of culture,” he adds.

Zeb, a film and television actor himself, has spent much of the last year banging the drum for the festival abroad, taking the brand to Cannes, California, New York and all of the Irish festivals. Along the way, movie star John C Reilly floored him with extensive knowledge of the Limerick event.

Moore, along with partner Sylvia and Rob Gill, have assembled a world class line-up of events for a busy four day programme, which will start with the unveiling of a memorial plaque to Richard Harris at his old stomping ground of Charlie St George’s, where Jared will read some of his father’s unpublished poetry, and end with a screening of top Irish film director Terry McMahon’s Patrick’s Day in 69 O’Connell Street. In between, there will be feature length and short film screenings and competition, workshops, acting monologues and networking events.

Of the seven feature length screenings, four will be Irish premieres, while there will be 30 shorts screening over the weekend of the festival. In the first year for international submissions, it received 150 entries, a “phenomenal amount”, says Zeb. In the Newport Beach section, ten films have been shortlisted, which will be whittled down to six to go to compete for screening in California, as Ciaran Dooley’s I’ve Been a Sweeper did last year.

A gala screening of A Man Called Horse will be the centrepiece of the festival, with family members expected to attend, plus top industry professionals from around Ireland and abroad. The reaction Jared and his brother Jamie, plus Richard’s granddaughter Ella, received when they came to Limerick last year has played a big role in the festival’s continuing rise.

“I think Jared has seen a different side to the city,” says Zeb. “He does talk about the welcome he receives and the atmosphere he takes in when he is here - he said the festival has this unique, personal aspect to it.

“Yes, we are still quite small and very boutique, but we try and keep our standards as high as possible and make it as prestigious as possible - with the resources we have.

“Jared realised last year on his visit the hard work we have put in to actually develop the festival in such a manner and to get the international recognition that we now have is incredible.

“It is great, but having had the guests that we had - the likes of Noel Pearson, Jack Reynor, Jared of course, Patrick Cassidy, Des Moore of Riverdance - all these people are obviously talking very highly about it. Your success is based on how people talk about you and we are being spoken of quite highly, which we are very proud of,” he adds.

Resources are tight, and the team hope that a big sponsor will come on board in the future, while it is an exciting time to be growing such an event with the imminent opening of a major film studio in the city looming in 2016.

But protecting and adding to Richard Harris’ legacy lies at the heart of the entire thrust behind the festival.

“As much as it is about the legacy of Richard Harris and I think the man would be very proud of the fact that there is a festival in his name, there is also the fact that he very actively, in his own career, tried to help people in the industry and give them a leg up whenever he possibly could, and this is just another part of it,” adds Zeb.

- Industry workshop - Thursday at 7pm in 69 O’Connell Street: ‘From script to screen, how to write, produce and distribute your first feature film’, facilitated by Stephanie Joalland and Sean McConville of Frenzy Films

- Bookings at www.limetreetheatre.ie or 061-774774. Full programme information at www.richardharrisfilmfestival.com. Above dates and screenings subject to change