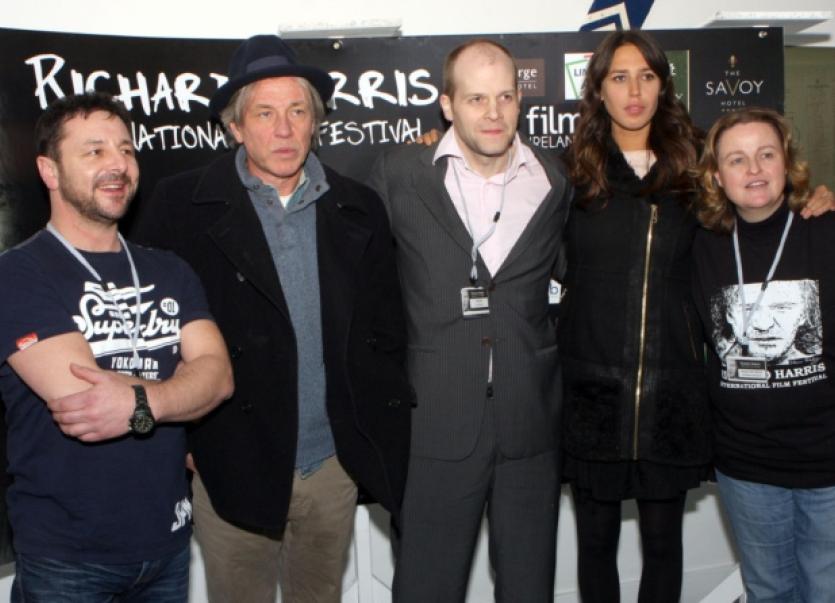 FIFTY years on from the release of This Sporting Life and Richard Harris was still packing them in.

FIFTY years on from the release of This Sporting Life and Richard Harris was still packing them in.

Relatives of the late Hollywood icon - including son Damian and grand-daughter Ella - attended an anniversary screening of one of his most famous movies at 69 O’Connell Street (formerly the Belltable) on Saturday as part of the inaugural Richard Harris International Film Festival.

Coinciding with a Harris reunion as part of The Gathering 2013, the festival featured workshops, lectures, networking opportunities with those involved in the industry and plenty of shorts and feature films.

Mayor Kathleen Leddin, who attended Friday’s gala screening of Pat Shortt’s Life’s A Breeze, said it was a pity that it had taken until now for Harris to be recognised with a festival in his hometown.

“I hope it turns out to be the start of something very big in Limerick because he really should be celebrated. He is celebrated elsewhere and he was born here and is from a very old Limerick family steeped in its history,” said the mayor.

While the organisers had received a modest grant from the City Council and use of the Belltable building, she said she would argue the case for more official support in future.

“Having seen how dedicated they are and the amount of work they have put into it on a shoestring, there is certainly that case for more support. It is something that could only be good for Limerick as we go into 2014 and the Year of Culture. We should be ashamed in Limerick that we haven’t celebrated Richard Harris more,” said the mayor.

Another Harris-related project that could come to fruition during 2014 is a series of radio documentaries, journalist Joe Jackson revealed.

Speaking at the screening of This Sporting Life, Mr Jackson said these would be based on 30 hours of interviews he recorded with the Limerick actor in his later years.

It was during those long discussions with Joe Jackson that Richard Harris revealed This Sporting Life - which won him a best actor at Cannes as well as an Oscar nomination - was “one of just five of his own movies he rated” in later life.

But the role of the tough Yorkshire rugby league player Frank Machin had taken a lot out of him.

“It wasn’t popular at the time but it was a huge critical success and he applied himself to it like he had never applied himself to anything previously and like he wouldn’t again for a long time. He poured his soul into it, his rugby-loving soul, his battling self and all his torment into it. He told me also that he was very much an advocate of the method school of acting at the time, which he rejected when he got older - totally rejected in fact. Part of the reason was that he brought Frank Machin home with him and was acting the thug with (first wife) Elizabeth. The worst thing for her was he never stopped.”

Those who watched This Sporting Life closely would see a lot of Terry Malloy from On The Waterfront, said Mr Jackson, as Marlon Brando and Montgomery Clift were “among the actors he watched very closely when he was going to the cinema in Limerick”.

Saturday was not the first time Hayman Harris, a nephew from Rhebogue, had seen This Sporting Life.

“You could never get tired of watching this one. It’s a classic. Of course the sporting element of it was him to a tee. Sport was a huge part of his life and this was a huge film in his career. It was the one that got him noticed and the one where he made his name,” said Hayman.

Eleanor McSherry, creative director of the festival said the organisers were delighted so many members of the Harris family had been able to attend. Damian Harris, a director and producer, had jetted in from Los Angeles while Ella had flown from London.

Messages of support for the festival had also been sent from sons Jamie and Jared - star of Lincoln, Sherlock Holmes, Mad Men and currently filming a big-budget remake of Poltergeist in Toronto.

“We had a full house (for the gala opening) with about 20 of the Harris family and of course the Limerick literati was out in force as well. It was fantastic with red carpet - really glitzy,” said Ms McSherry.

Despite limited official backing, Ms McSherry paid tribute to the many local businesses who had provided support in-kind and some 50 volunteers who helped make the weekend happen.

Munster’s big win in the Heineken Cup on Sunday was a perfect note on which to end the weekend for those members of the Harris family who made it to Thomond Park.

Damian and Ella Harris were not among them, however, having urgent business in London to present the Richard Harris Award at the British Independent Film Awards.

Presented to actors who have made an outstanding contribution to British cinema, past recipients include Helena Bonham Carter, Daniel Day-Lewis and Ralph Fiennes. This year’s winner was Julie Walters, who starred alongside Richard Harris in the early Harry Potter movies.