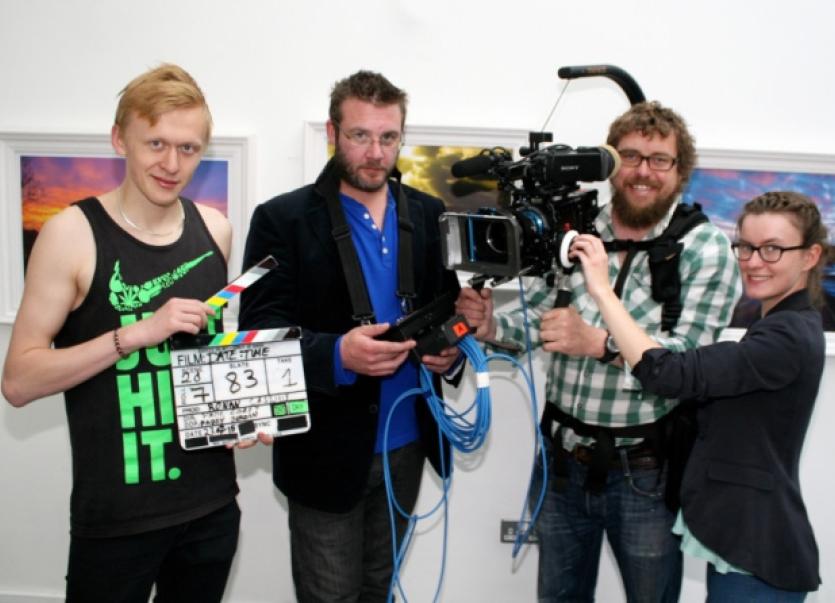 LOVE was in the air as a movie crew hovered around two actors finishing their final set of scenes in the city centre, for the grand finale of the hugely-anticipated Film Limerick trilogy.

LOVE was in the air as a movie crew hovered around two actors finishing their final set of scenes in the city centre, for the grand finale of the hugely-anticipated Film Limerick trilogy.

Mentored by screenwriter and author Gerry Stembridge, and fuelled by a team of local talent, the City of Culture trilogy saw six young writers and directors turn their imagination into three shorts.

Each film, according to Gerry, represents a modern Limerick and what it is like to live in the city. And the final film, entitled Date Time, tells the tale of one clumsy photographer and a gung-ho girl who fall in love.

The first scene is filmed on a chill Thursday night, at around 10pm, at Poor Man’s Kilkee in the city. More than 20 people are closely huddled around actors Erica Murray and Mark Griffin, as they begin their opening lines.

Mark plays the character of stuttering Bob, who is spotted taking photos of a zealous Anne as she sits alone on a bench. At this stage, Patrick Jordan — who was involved in the Oscar-nominated film Pentecost in 2012 — closes in on the two actors , signalling the crew to follow suit.

Plenty of cars and pedestrians pass by, but not a single horn blares from a vehicle. After that scene wraps up, it’s time to call it a night before the big day — the final day of filming.

“I feel relieved,” Gerry told the Limerick Leader in the back row of an empty theatre at the former Belltable Arts Centre, moments before the final few scenes were to be filmed at this location.

“The project has taken almost a year, but actually the number of shooting days has only been 12. But they are spread across. The shooting days; there’s crew, there’s cast, there’s extras, there is a big palaver to get it together. It can go wrong and it can go badly wrong. And even as it turns out, today is a relatively easy day. I already know that this film works. I’m relaxed now,” he said.

The three Film Limerick writers and directors, who each say that they never have worked on projects of this calibre, were mentored by the renowned writer, in order to create the “perfect” Limerick movie. Gerry said that working with them was the highlight of the City of Culture initiative.

“The kind of great memories that I have are the likes of being in the first meeting with each of the three writers and walking around Limerick and talking about the idea and how it might work, and getting them to think about what they will write. As without them, the project doesn’t happen at all.

“They would then go off in their own solitary space and think about it. And then it grows and grows and grows, but at any stage, the whole thing could fall apart. So it is really fantastic to be out here in the last day of the third film,” he explained.

“What a city feels like is inside us all, but we rarely talk about it.

“People who walk in Limerick and go out to pubs and restaurants in Limerick, they never talk about what it feels like to live in Limerick. And a film can create that feeling, and there’s all different moods and all different atmospheres of different parts of the city, and film is the best thing to capture that because it’s a visual medium.”

The crew, also relieved but stern, continue filming in the gallery space at 69 O’Connell Street, where Mark and Erica [Bob and Anne] admire art work hanging on the wall.

As Patrick slowly shuffles around with his easyrig — a body brace for his camera — instructions for the crew are called out; “Okay guys, still rolling ... Quiet folks, we are catching a bit of fidgeting with the echo in here...cut it there and reboard.”

And even with a room of 30 extras, technical crew and a busy thoroughfare outside, the final scene wraps up smoothly without major disturbances.

Date Time, now in post-production, was written by Philip Shanahan and directed by Paul Corey. The two other films are Day Off, by Peter McNamara and Steve Hall, and The Apparel, by Peter Delaney and Daniel Moloney.