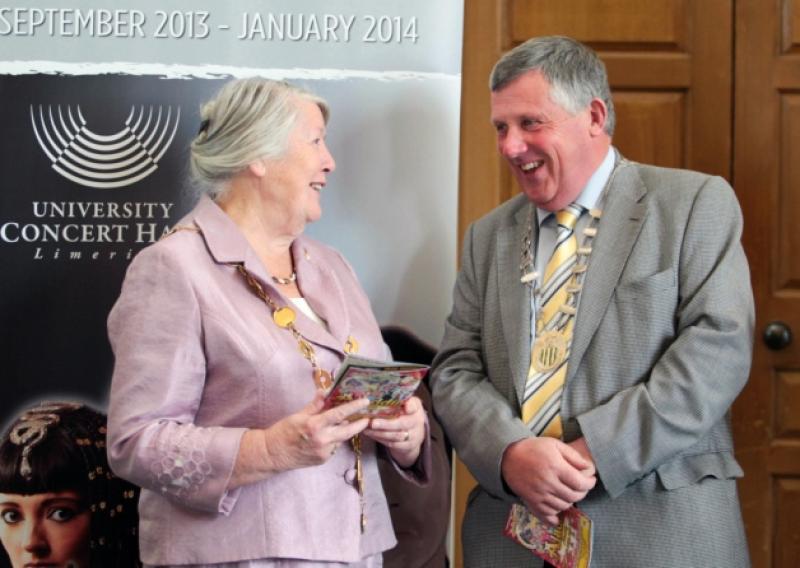 The University Concert Hall this week began a march toward Christmas with the launch of its new autumn/winter programme, the centrepiece of which is a production of Aladdin in December.

The University Concert Hall this week began a march toward Christmas with the launch of its new autumn/winter programme, the centrepiece of which is a production of Aladdin in December.

The fully professional panto will again star Twink and Limerick’s own Leanne Moore, who starred in the smash hit Cinderella last Christmas.

A “musical masterpiece and dramatic delight that is sure to tempt audiences aged from 3 to 93”, the panto will feature Richie Hayes and Adam Lawlor plus a starry list of local talent in Moore, Myles Breen, Richard Lynch and introducing Mr. World 2010, Kamal Ibrahim in the title role.

Speaking at the launch of the programme in the Hunt Museum this Monday, marketing manager Emma Foote said that Kamal, who couldn’t attend as he is hosting the Ms World pageant in Bali, was “really looking forward” to making his panto debut.

“We are delighted to have him on board, it is his first time on panto and he is really looking forward to doing it and to be able to do it in Limerick with that cast is going to be great,” she said.

“It is the jewel in the crown and is a fully professional panto. It is the team that brought us Cinderella last year, the same producer and director, so there will be all the same production values and of course Twink is back, which is brilliant,” added Emma.

Mayor of Limerick, Cllr Kathleen Leddin and Leas Cathaoirleach of Limerick County Council, Cllr John Egan, attended the launch of the programme this week, which Ms Foote said should “have something in there for everyone, no matter what your tastes or the kind of entertainment you like”.

“We have some good comedy acts, Jimmy Carr, who is one of the biggies, Oliver Callan and Bernard O’Shea - who are new ones to us here and Neil Delamere is back to us again in January,” said Emma.

The season will kick off with folk icon Christy Moore, while 70’s star Leo Sayer, the popular Red Hurley and country favourite Charlie Landsborough will all feature over the coming months.

Musicals will strongly feature in the shape of award winning Showgroup Smackee performing Phantom & The Musicals, Stayin’ Alive brings The Bee Gees Story and, by popular demand following their highly acclaimed performance last June, Get Back – The Beatles, also returns to the concert hall.

The Royal Moscow Ballet and two, full scale Verdi operas starring international soloists and the Chisinau National Opera and Philharmonic Orchestra plus the Irish Chamber Orchestra all return, as do Limerick Choral Union with Handel’s Messiah.