Painting a Limerick picture through the Big City Portrait 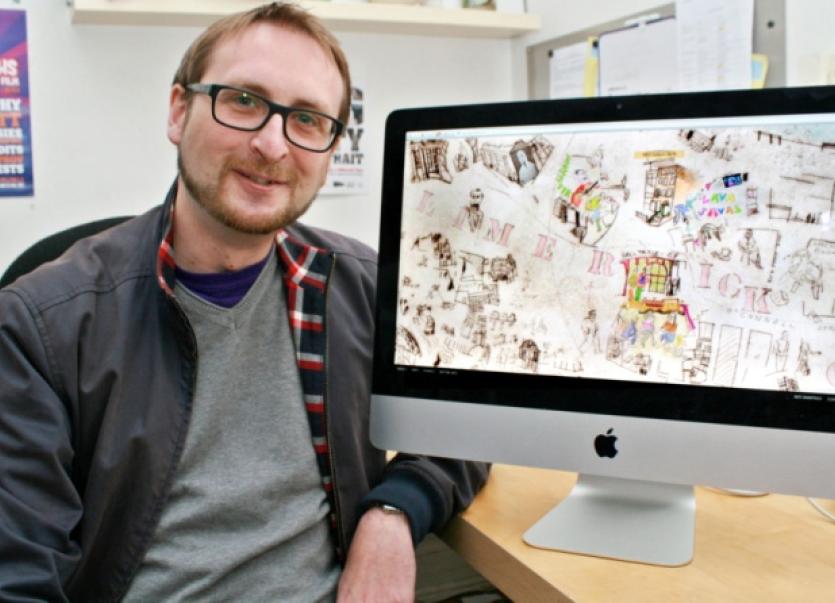 THE Big City Portrait is a superb collection of online documentaries showing the city and county through young eyes, brought together on a beautifully drawn map of Limerick. Director Pete Moles details how it all happened.

THE Big City Portrait is a superb collection of online documentaries showing the city and county through young eyes, brought together on a beautifully drawn map of Limerick. Director Pete Moles details how it all happened.

OVER the past year and a half it has been my privilege to develop a unique project as part of Limerick’s tenure as City of Culture with Fresh Film Festival.

This is Limerick through the eyes of its young people, with a collection of short documentaries made by teenagers across the city and county. The project represents a huge amount of work. I think it’s something special.

Already the reaction has been very positive. Viewers have really responded to the collection of films as an alternative viewpoint. The films are diverse and serve as a time capsule for what a group of young people thought was important in 2014.

The project doesn’t aim to be exhaustive in its presentation of Limerick’s young people (not even close), but rather is a collection of different opinions curated together to create a mosaic of films which together form the portrait.

The Big City Portrait is a celebration of youth cinema. Limerick is home to the country’s largest young person’s film festival, which is about to enter its 20th year. Fresh has been a home to filmmakers who are discovering their voice, and has screened some truly wonderful films over its two decades.

I have been the festival’s technical manager for five years now and under the direction of Jayne Foley and the management of Ciarda Tobin, it’s been an incubator for young talent since its inception.

I’ve been working as a filmmaker for over a decade, and in that time I’ve gotten to do lots of projects with young people. It’s a great medium for getting into conversation and over the course of the year I learned lots of new things about the place in which I live.

Fresh has always been a home for ambition, and the Big City Portrait certainly is ambitious.

The point of the project was to facilitate filmmaking at every level, from concept to execution to exhibition. To accomplish this, I worked with young people, either individuals or in groups, to produce short documentaries focusing on particular places of personal interest.

These short films have been mapped out on an interactive web documentary that can be accessed by anyone with an internet connection.

It was inspired by web documentaries such as the tremendous Bear 71, Welcome to Pinepoint, Highrise, Storymap and other participatory documentary projects like Ridley Scott’s Life in a Day. This collaborative style of filmmaking suited a youth cinema project, with young people as the subject/participants who provided the content and direction for each individual short.

Not only does this exploit an often-overlooked viewpoint, but also helps to preserve anonymity online. Balancing the ethics of working with young people with the need to exhibit work representative of their viewpoint was a challenge at the heart of the Big City Portrait. I’m really happy with the result.

The webdoc consists of 24 short films accessible from an interactive map, an original print by artist David Lilburn. Just navigating around this is really satisfying, especially with the reactive musical soundscape created by Paddy Mulcahy.

There’s lots of little details to find if you go searching and the markers for the films are highlighted in colour when you click on them and there’s a list to keep track of what you’ve watched.

There are a lot of films, which is why it keeps track of what you’ve watched. You don’t have to watch them all in one sitting.

The talented Little Blue Studio handled the development of the website. They’re good people, always responding positively when I requested some new feature.

The code is custom written, built with HTML5, CSS3, PHP and JQuery. Where previous webdocs relied on Flash, modern browsers are moving to replace this technology, and the Big City Portrait exploits the new technologies. It works across browsers and on most devices. I don’t think anyone’s ever built a website quite like this before.

There were too many other people involved to mention here, but it wouldn’t have possible without the support of some truly talented filmmakers. The young people involved worked to varying degrees but always were in control of the content. These are their films.

When the City of Culture year was announced, I knew that I had to be a part of it, so I moved back to my native Limerick grateful for the opportunity to work on a project that allowed me to stay here. It’s an exciting place to be a filmmaker right now and its great to see so many great films getting

It really was a great year. Talking to the young people who were interviewed during the Big City Portrait, it was clear that the City of Culture was really inspirational, where the possibility of new and interesting things every week being tied to a sense of pride in their home.

The banners and flags for the year sit quietly in the background of many of the films. The City of Culture allowed unique and ambitious projects to come to fruition and I have respect to everyone who helped to make the year a reality.

I hope this inspires people to make movies themselves. We’ve included a documentary filmmaking guide as part of the project. Fresh will be accepting entries at the end of this year.

We’re looking at Limerick 2020 now and I really hope the city gets the chance to put its glad rags on again.

Projects like the Big City Portrait show that Limerick is teeming with talent and we can deliver great things with a little support.

The website can be seen at Big City Portrait. Fresh Film Festival is at freshfilmfestival.net and on Facebook.