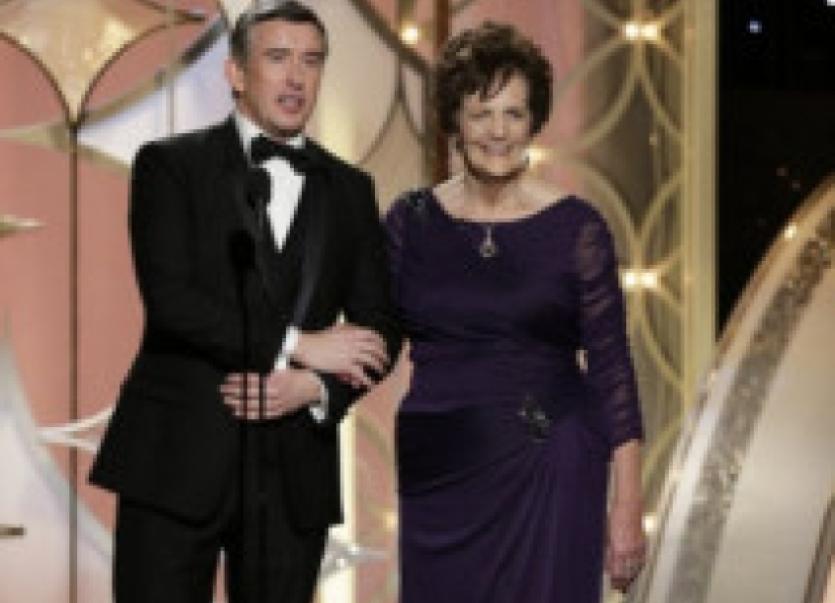 NEWCASTLE West woman Philomena Lee, whose efforts to track down her son 50 years after she was forced to give him up for adoption were turned into a major film, has appeared on stage at the Golden Globes in Hollywood.

NEWCASTLE West woman Philomena Lee, whose efforts to track down her son 50 years after she was forced to give him up for adoption were turned into a major film, has appeared on stage at the Golden Globes in Hollywood.

Ms Lee, together with actor Steve Coogan, walked the red carpet at the event in the Beverly Hilton Hotel before introducing the film, which has made some €30m worldwide and was nominated for best motion picture.

Speaking before a worldwide audience of millions, Ms Lee said Philomena was “not just about me, but about women everywhere” who may have suffered a similar plight.

The film, directed by Stephen Frears and starring Judi Dench and Coogan, has drawn plaudits worldwide for telling a dramatised version of the Limerick’s woman search for her son along with former BBC journalist Martin Sixsmith, played by Alan Partridge star Coogan, who also co-wrote the screenplay.

The 80-year-old was forced to put her son Anthony up for adoption in 1952 when she was just 19, after raising him for three years in the Seán Ross Abbey in Tipperary.

After becoming pregnant, Philomena was sent to the convent, where she worked in the laundry. Her son was put up for adoption by the nuns and subsequently taken without warning by an American couple, who paid the nuns a donation.

She never saw him again, despite her efforts in later life to trace him.

The film, produced by Hollywood mogul Harvey Weinstein, has been nominated for a slew of awards including best picture and adapated screenplay nominations for the Academy Awards.

It is currently second favourite at 5/2 with bookmaker Paddy Power to win Outstanding British Film at the Bafta awards, while Coogan and co-screenwriter Jeff Pope are 4/1 to win the adapted screenplay award.

The former nurse, whose family still live in Newcastle West - she attended a funeral there last year - has been in Los Angeles for award season to help drum up interest in the film.

“It is a challenge because I normally led a very quiet family life when all this happened,” she said in an interview. “I have brought something out that was buried for so long,” continued the Newcastle West woman, who now lives in London.

“And a lot of women like myself just could not tell the story because you were made to feel so bad about having a baby out of marriage,” she added.

After some initial concerns about the film, which The Queen director Frears added some humour to, Philomena said she is now “fine with it”.

“It had to bring some laughter into the film as well as tears. The film is so sad really. All my part is a true story.”