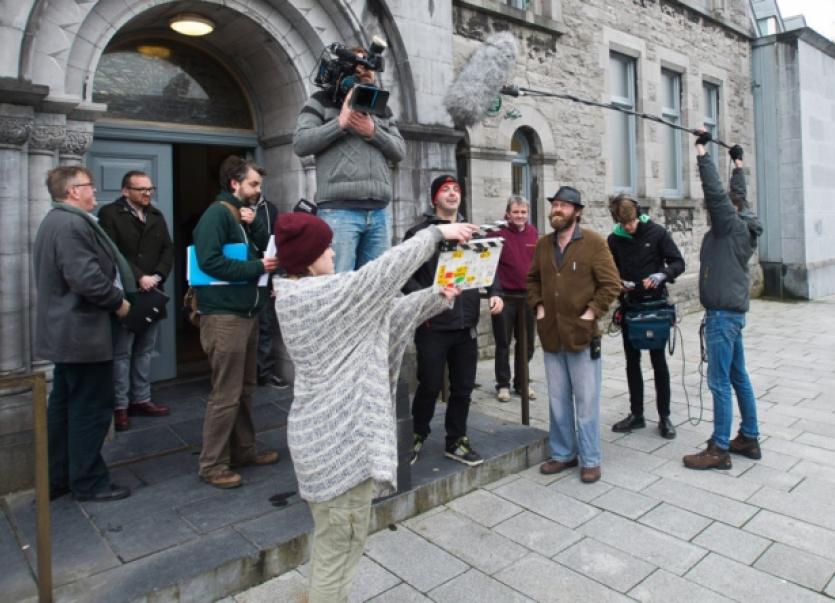 TO mark completion of shooting on two of the three City of Culture-backed Film Limerick trilogy, the public were invited to Dolan’s this week to get a teaser of the upcoming works.

TO mark completion of shooting on two of the three City of Culture-backed Film Limerick trilogy, the public were invited to Dolan’s this week to get a teaser of the upcoming works.

Hosted by Film Limerick project manager Ronan Cassidy, Monday night’s event consisted of a Q&A with two of the young directors and one writer, following a three-minute draft preview of two of the films.

Speaking at the event was Peter Delaney, director of The Apparel, writer Dan Mooney of the same project, and director Steve Hall of drama Day Off.

The crew discussed their experience working on the films at the event and their involvement with writer and director Gerry Stembridge, who mentored the crews throughout filming.

The final film Date:Time has yet to be shot, but is slated to take place between July 22 and July 25.

Director Peter Delaney said the experience was very valuable, adding that the trilogy was an “amazing achievement” for Limerick.

“It was a great learning curve for me. Everything that I have done before has been very small scale; stuff that I would have written myself and got a few people to help out. But this was definitely more a professional, industry standard way of making things. Having someone like Gerry Stembridge on board who has a lot of experience was an amazing help for everything. I learnt so much from it,” he said.

“So many people have benefitted from it. People have gotten on board and have helped out. The quality in Limerick has just shot up. Everything was small scale before, but now we are at a professional standard. It’s getting better and better, and also getting tighter with each production,” he said.

During the discussions in front of the audience, the crew discussed difficulties transferring script to visuals. Mr Delaney said that they “never hit a brick wall”, despite all potential pitfalls.

“Anything that we did here, we were definitely going to overcome. We always had backups. For example, if we felt that the location was going to fall through, we would always have a backup plan. And that is because we had very experienced people on board. There were people who knew how to run the ship,” he explained.

Steve Hall, who studied four years in video and sound technology at LIT, said the college experience was a “massive difference” in comparison to work on a “real set”.

“The thing that I always tried to do was to make it not about doing your homework and getting your assignments in,” he said.

“I actually wanted to make work that I could use as my assignments, and I genuinely enjoyed going out there and making films and telling stories.

“And it happened to be that that is what my assignments were as well. I thought I had an understanding of how film works and the ins and outs of it.”

He added that he is looking forward to Day Off, a drama about a wife and her husband, who has an acquired mental disability.

“It’s going to be surreal when it hits the screens. It’s been a very, very long time in the making. To actually have it now being put out into the world in a very small format, and have it in a full film, instead of a two-and-a-half minute clip is going to be incredible. And the fact that it’s going on TV is a massive jump start to my career, which is incredible.”

“I think his aim had always been to encourage what skills we had and try to get the most out of us, in the direction that we want to go, and he still put his own little stamp on it. With Day Off, you got to see the best of Peter [McNamara], or a glimpse of what Peter does very well, which is this dramatic, very poignant and very meaningful stuff. And that is what Gerry was trying to do; find out what our strengths were and make us go that way and still keep it semi-real.

Project manager Ronan Cassidy said that the crew exceeded his expectations throughout the delivery of the films.

I know from a lot of people who don’t work in film, that first time directors and first time writers kind of bring in their own problems because they have never done the process before so they are going to make a load of mistakes. But I think the guys stepped up to the challenge well. But not only the writers and the directors, for the make-up artists, it’s very difficult to do makeup and keep that look over the one day, especially when you have been filming scenes all day.”

He added that the trilogy will play a part in the bid for Limerick to become the next European Capital of Culture in 2020.