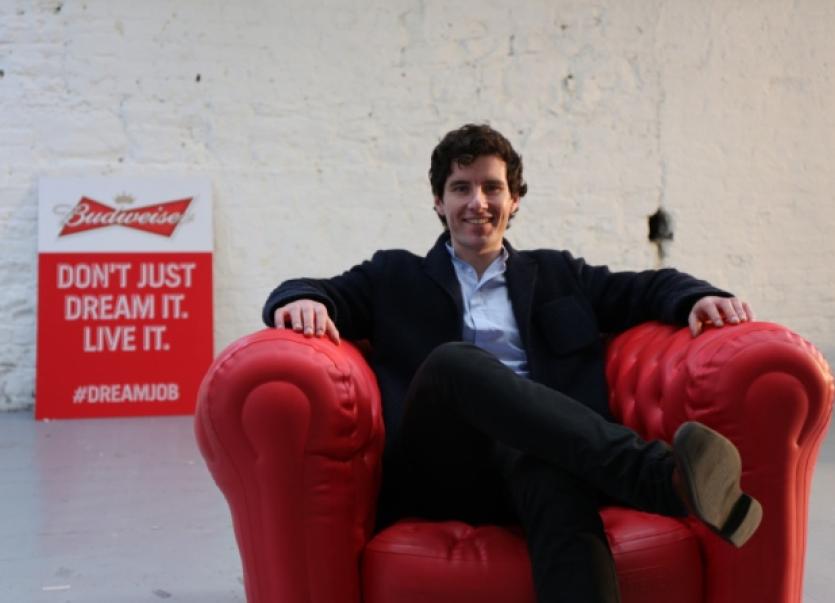 ASPIRING film maker and actor Mark Griffin has been chosen as the winner of the Budweiser Dream Job competition, one that comes with a €50,000 prize.

ASPIRING film maker and actor Mark Griffin has been chosen as the winner of the Budweiser Dream Job competition, one that comes with a €50,000 prize.

Mark, a doctor who hails from Ardnacrusha but who grew up in and around Limerick city and went to school in St Munchin’s, wants to pursue a career in theatre and film and was announced this afternoon as the winner of the competition by Breaking Bad star Aaron Paul.

“Well done Mark. Congratulations my friend. The guys at Budweiser tell me that you studied medicine - amazing! But acting...yes, and directing have always been your passion. So this year you get to work towards your dream my friend. Enjoy every second. Bravo. Congratulations!”

Mark beat out stiff competition from the other four finalists to secure the most public votes on the Budweiser Ireland Facebook page. Mark will receive a €50,000 prize fund including €40,000 cash to give him the freedom to work towards securing his dream job over the next twelve months. In addition, he will receive a €5,000 equipment bursary, and practical mentoring sessions with experts in the world of TV, film and directing.

“I have always loved telling stories, it is why I started acting,” Mark said recently.

After ten years on the stage, Mark - who attended Limerick School of Music - made his first short film last year, inspired in part by City of Culture, he explained.

“Everyone’s got a film that they love, one that makes them laugh and makes them cry. I want to spend my life making films like those. My desk at home is stacked sky high with what I want to turn into films.”

While studying medicine in UCC, Mark became heavily involved in the drama society and has since pursued his “interest in theatre and film in tandem with my work as a doctor”.

He directed his first short film last year, Drift, which won a number of awards at the March On Film awards, while his first short play In a League of his Own was recently staged in London.

Mark also read the title role in the theatre legacy project that staged Pinhead Duffy last year and appeared in a radio play commissioned by City of Culture.

He says he was “inspired” by the “creativity and dedication that went into City Of Culture”.

“Winning dream job would allow me to make this my full time career. To buy my own equipment, to improve my skills, and ultimately, shoot my first feature length film. So please vote for me and let me share my stories with you.”

The judging panel for the Budweiser Dream Job was headed up by ‘Game of Thrones’ star Liam Cunningham, alongside internationally acclaimed DJ Matador and TV presenter Leanne Moore.

Over 2,000 entries were received this year, and the judges were impressed not only by the level of talent, but by the determination and passion of the entrants. Over 7,000 people voted on the finalist videos on the Budweiser Facebook page over the past three weeks.