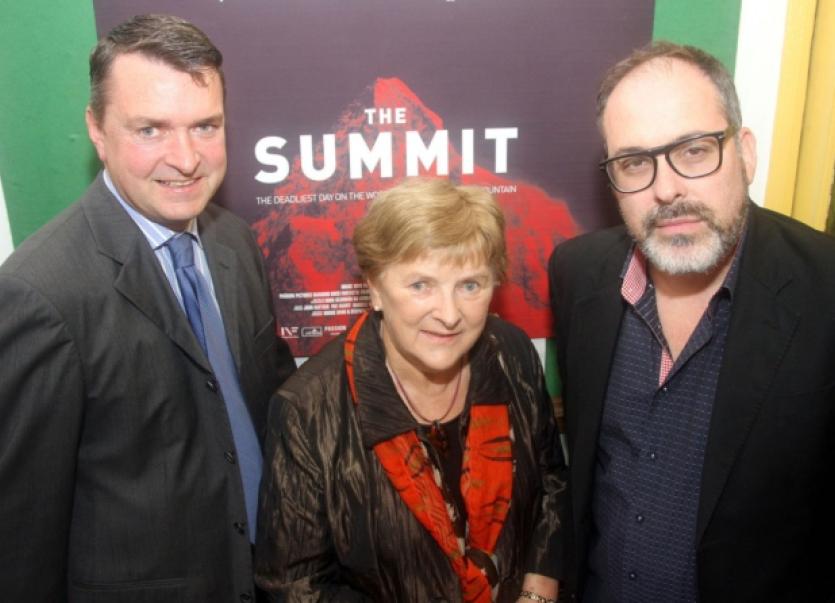 THE Summit, the film about the K2 mountain tragedy that claimed the life of Limerick climber Ger McDonnell, is to open in cinemas this Friday.

THE Summit, the film about the K2 mountain tragedy that claimed the life of Limerick climber Ger McDonnell, is to open in cinemas this Friday.

The gripping documentary film, which mixes real footage of the climb and interviews with survivors with reconstructed scenes, has won awards all over the world.

Nick Ryan’s film will be screened in Limerick, described by Ger’s brother JJ as “very important”.

“I would hope that people will go to see it. The family have no financial input or gain in any way from this. I think that it can only be really appreciated - the enormity of the mountain and the challenge that they faced - by seeing it on the big screen,” he said.

After the 2008 tragedy, conflicting reports swirled about Ger’s final hours on the mountain, who was the first Irish person to summit K2 and died on his return. The film clears up any mystery, piecing together the wealth of evidence available, confirming that McDonnell tried desperately to save three trapped climbers before being hit by an ice fall on his descent.

“The movie is not about Ger, even though it captures the essence of him and he is a central character,” said JJ. “So I and the family are delighted with this and that his story has got out there.

“Everything in this movie, we knew after ten days. It is beyond doubt, there is photographic evidence, which we know for a fact, that Ger was actually coming down after the members of the Korean team, that he had successfully freed them.

“I don’t know why, in interviews in general about this, people use words like ‘attempted rescue’ instead of ‘successful’. Unfortunately they were subsequently hit. If they had lived, for us as a family, Ger would not have died in vain.”

Ger was posthumously awarded the Targa d’Argento Pinzolo gold medal for his heroic efforts, but it is thanks to the global reach of this film that his story will be known worldwide, offering some solace to the family.

“My mother, and this is very hard, gets joy from seeing this movie. To see how evidently happy he was there, with all his friends, on the mountain, climbing - that has acted as an extreme solace for her,” said JJ.

“The film speaks for itself, and Nick has done a great job. The thing is that he could have survived but in fairness he made a conscious decision and it is something for me that I know if he hadn’t done this, if he hadn’t stopped, it would have tormented him for the rest of his life.

“There are two types of heroes in the world as far as I am concerned, accidental heroes and conscious heroes. In relation to this film, I hope it inspires others to be heroes and save lives consciously. If it could serve to do something like that for others, I think it will have achieved a lot.”