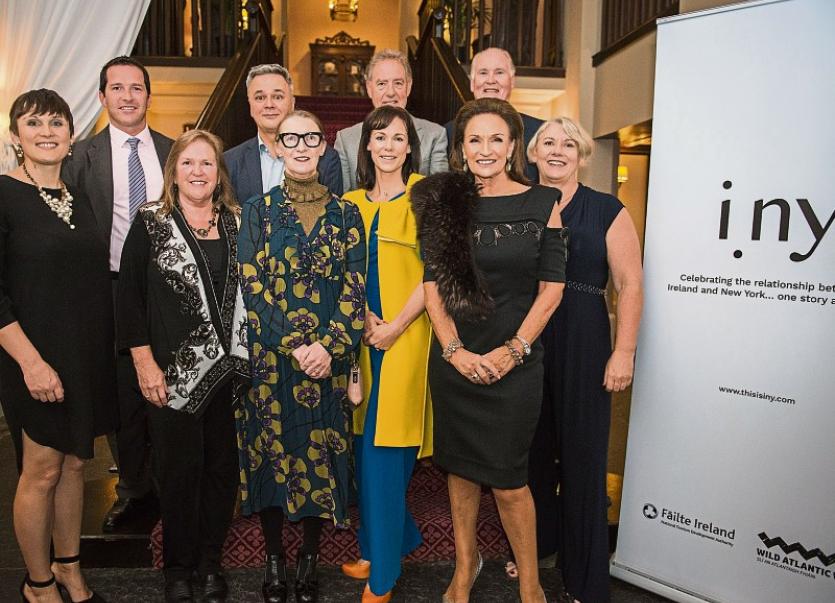 IT was my privilege to be involved in a festival celebrating the deep Irish connection with the Big Apple. The I.NY festival, took place in Limerick from October 5 - 15, featuring - among others - Oscar-winning musician Glen Hansard, David Bowie’s musical director Gerry Leonard, director of The New Yorker Festival Rhonda Sherman and designer Orla Kiely.

On one of the evenings we started the celebrations with a whiskey reception to the cool sounds from New York DJ, DJ Marv. During dinner, renowned Irish fashion designer Orla Kiely was interviewed by Dr Leonie Lynch. It was a lovely setting for them to have a relaxed conversation about Orla’s life in New York after she graduated from NCAD. This was followed by guest speakers Tim O’Connor (Former Secretary General to President Mary McAleese and Consul General of Ireland in New York)) and Maura Kelly (Emmy award winning producer) who each told stories of their history and relationship with New York, and the personal and professional impact the city has had on them.

It truly was an exceptional gathering of people on the night and we were honoured to have such high profile visitors come to our city. Guests included Dr Jane O’Meara Sanders (wife and political advisor of US Senator Bernie Sanders) and her son Dave O’Driscoll (Co-founder of Sanders Institute), Dermot Rowan (MD & Co-owner of Orla Kiely brand) and Caroline Heafey from NYU. Other familiar faces on the night were Irish designer Marion Murphy Cooney, Tadhg Kearney, the Foley family, Prof Lisa O’Malley (I.NY conference chair), Dr Pat Daly, representatives from Fáilte Ireland and the University of Limerick. Well done to everybody involved!

IT was great to be back with Oxendales to launch their autumn/winter ad campaign,which was photographed and videotaped at the K Club in Co Kildare.

It brought back some very fond memories when I worked with Sharon Ni Bheolain and RTE at the Ryder Cup where I styled Sharon when she covered the event for world television.

There have been many moments in my life when I have been so happy to be involved in this industry, including when I stood on the sidelines when Sharon introduced the European and American teams. As I stood at the side of the stage at the K Club, first to pass me was Tiger Woods then Jim Furyk followed by the rest of the American team, then the Europeans arrived led by Padraig Harrington and Colin Montgomerie .

You can imagine how proud I was in the K Club to share my little bit of history from 2006, regarding the Ryder Cup.